There was a good turn out for Diplo’s E-Participation Webinar on Tuesday 21 May.  The full recording of this webinar can be found here:

This is the first of a series of three blogs covering the webinar and the Oxford-style debates.

The backdrop for the three debates was the statement: Social media, open gov/open data initiatives and  remote participation are opening up international organisations and development agencies. The increased use of cloud-based technologies is making organisations more consultative, transparent and accountable.  True or false?

The first debate kicked off with the statement:

“The way that most international organisations are using social media suggests that this is not true engagement, but simply broadcast. True or false?”

In supporting this statement, Pete Cranston of Diplo argued that :

In opposing this statement, Paul Conneally, Head of Communications at the International Telecommunication Union, argued that:

Participants were invited to vote after each debate. The result of the first vote was as follows: 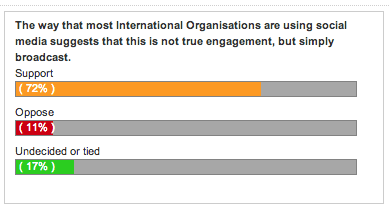 Some comments from participants:

Despite some persuasive arguments by Paul Conneally of the ITU,  the audience tended to agree with the statement that International Organisations are not truly engaging with their followers.

These issues will be revisited on E-participation day  – Towards a more open UN where we will be joined by speakers from WHO, Global Fund and UNDP.

My next blog will cover the second debate: “Remote Participation programmes and initiatives make International Agencies moretransparent and inclusive.  True or False”

eDiplomacy: influence in the Arab world in the Twitter age

What makes up institutional capability for e-diplomacy?