You are here: Home1 / E-luddism and my attempt to be off-line

First, I decided to go for a half-holiday. I decided to spend half of my day with my daughter and her cousin skiing at the local ski centre outside Geneva and to spend the rest of the day working online.  In the morning, we would make the half-hour drive to the ski centre and return in the afternoon when I would take the other – working – part of my ‘holiday’. The plan worked very well on Monday. Half and half.

On Tuesday, I let the kids go to the ski school while I stayed in a café to finish a project I hadn’t completed the previous night. But I did get  an hour on the slope, as the café didn’t have Internet access. On Wednesday, I moved to the next café, which did. On Thursday, I dropped the kids near the ski school and worked all day, non-stop. On Friday, I scheduled three conference calls and took all three as I drove them to the ski centre. So much for my half-holiday.

Coincidently, if you believe in coincidence, I received a short article from the Times of Malta, which stated:

The GWU (General Workers Union) has ordered the Officers at the Foreign Ministry not to use their duty mobile phone and duty laptop after their normal working hours.

The union complained that  these Officers were being asked to take the duty mobile phone and laptop home so that they could receive and answer telephone calls and emails from the time they left their office until they returned.

These officers were being asked to work with this system on a weekly based roster.

In the spirit of trying to recover some free time, I empathise with  this news from Malta.  Malta’s trade union may have more success that I did as Malta’s scenery and sea may have some chance when competing with computers for the attention of Maltese officials.

But, essentially, this ‘order’ from the Maltese trade union is from some other time, a different time, a time that was,  in many respects, a  much nicer time. The reality has changed and the new normal is, as Pete Cranston described, very different. Our normality is to be connected. One experienced ambassador replied to this attempt to return to the old normality and said: ‘I am afraid this ship has left the harbor forever.’

I am still troubled by losing the fight to free up some time; I am tired of the endless rushing around; I am left wondering whether  wi-fi will be available in the graveyard.

But, hope is not lost!

And it comes from an unexpected direction… from the business world. More and more businesses are questioning the so-far dominant equation that more connection/networking implies more efficiency.  There is an increasing amount of research that shows quite the opposite. Already,  a number of companies are introducing Internet-free days, or procedures whereby  e-mail and social media are checked but twice a day, or even retreats that last for days without the Internet.

This functionality approach could be the basis for some more serious discussion on reasonable working time. Perhaps a topic for the next meeting of the International Labour Organisation?

In the meantime, we can laugh along with the New Yorker. 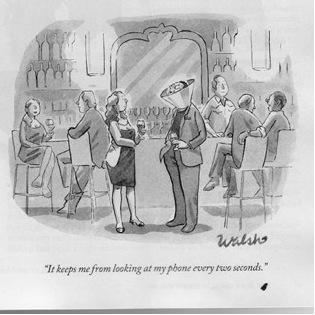 Highlights of the WSIS forum 2015