Why is ‘Arm’, UK high-tech company, becoming a key actor in digital geopolitics? 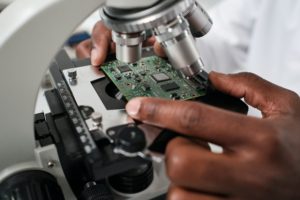 UK high-tech company ‘Arm’ addresses the need for the fast development of increasingly complex microchips. Microchips designed by Arm are produced by a wide range of manufacturers, from Nvidia to Intel. They are used in mobile phones, drones, and other internet of things (IoT) devices. For example, Arm designs 99% of smartphone chips.

Arm tries to keep its unique position by remaining a neutral actor in the semiconductor industry. By refusing a recent buy-out offer from Nvidia, Arm remains neutral as the ‘Switzerland of the tech industry’, stated Arm’s former boss Simon Segars.

Another challenge for Arm will be the RISC-V chip architecture that lacks royalties and licence fees, the core of a company’s business model.

Arm will play an important role in the emerging geopolitics of microchips. This company’s importance is such that some UK politicians proposed that the government takes control of the ‘golden share’ of Arm.