You are here: Home1 / The impact of big data on geopolitics, negotiations, and diplomacy

The impact of big data on geopolitics, negotiations, and diplomacy

Throughout history, humanity has relied on different critical resources. Oil was one such resource, which spurred economic growth, as well as conflicts over access and control.

Today, as The Economist argued, data is the new oil. It is at the core of modern developments, and is increasingly shaping political and economic lives. As more data is stored and processed digitally, the governance of this data is having an impact on diplomacy, just as the politics of oil has been doing over the past 100 years.

How does data impact diplomacy? First, data impacts the environment in which diplomats operate. The flow of data shapes the flow of money. It influences and creates new data-driven geopolitics and geo-economics.

‘Conflicts over control of oil have scarred the world for decades. No one yet worries that wars will be fought over data. But the data economy has the same potentials for confrontation.’ This is how The Economist set the stage for a discussion on data geopolitics, centred on the question of national security, and, increasingly, geo-economics – defined as the promotion of national interests through economic means.

Internet cables are a tangible aspect of data geo-politics. Damage to cables can disconnect an entire country from the Internet, which can have profound economic and political consequences. In 2008, the cutting of the main Internet cables near Alexandria (Egypt) gave us the first glimpse of the consequences for users and businesses in the Gulf region and India. 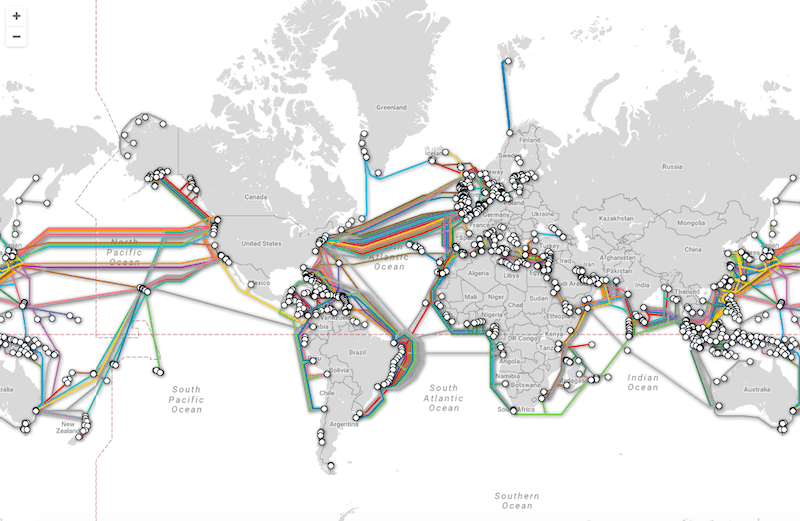 Global geopolitical and geo-economical relationships depend heavily on access to the main Internet cables carrying Internet traffic between countries and continents. Presently, more than 90% of all global Internet traffic flows through submarine cables, which mostly follow the old geographical routes used by telegraph cables in the nineteenth century.

Data is now central for economic growth as well. In addition to the Internet’s fast-growing economic platforms, manufacturers are increasingly shifting towards providing services via digital means, and using new digitally supported business models. For example, Rolls Royce does not sell aircraft engines any more, but charges for the use of the engines, and utilises extensively the data collected from their use.

Soon, competitive manufacturing will not be possible without smart industrial platforms, such as General Electric’s Predix, or Siemens’ MindSphere, which are digitalising traditional industries. Global production chains rely on extensive data flows. The interplay between artificial intelligence (AI) and the Internet of Things (IoT) will make us further dependent on data.

This dependence on data makes countries highly vulnerable to any disruption of data flows. Maintaining data flows worldwide is vital for countries’ social stability, economic wellbeing, and growth. For example, the disruption of e-commerce, e-banking, and platform services such Airbnb and Uber, could cause great economic disruption.

Key strategic points, such as the Suez Canal and Malacca, remain as relevant today as they were in the past. For example, most of the data traffic between Asia and Europe goes via Egypt (Alexandria, the Suez Canal). Other critical points include Luzon and Hormuz. 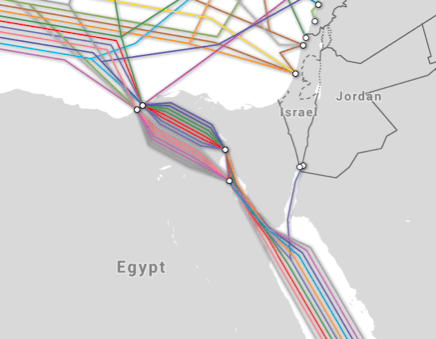 The diversity of data traffic routes is increased via terrestrial cables. Submarine cables are growingly supplemented by terrestrial ones. The Digital Silk Road, part of China’s ‘One Belt – One Road’ initiative, aims to span Euro-Asia with fibre-optic cables laid along newly built railroads and energy pipelines.

In addition to the access to data, countries could realise the potential of data-driven economy by educating and training in new skills as well as developing the necessary policy and regulatory ecosystem. Capacity development for policymakers involved in data discussions would also help strengthen their ability to understand and negotiate critical issues related to data.

Access to data and its effective use will determine countries’ positions in emerging data-driven geopolitics and geo-economics. The role of diplomacy will be very important. Diplomats will increasingly have to deal with the inherent paradox of protecting sovereignty, one of the core functions of diplomacy, while at the same time promoting countries’ participation in global data integration, and thereby reducing sovereignty. This generates a diplomatic Catch 22, one that will require new skills and diplomatic innovation. It will also be the major determinant of diplomatic success in the emerging data-era.

New topics: Data at the centre of diplomatic negotiations

The more relevant data becomes for countries worldwide, the higher it rises on diplomatic agendas. Data is rapidly moving to the ‘premier league’ of global diplomacy, alongside the more traditional issues of disarmament, health, trade, migration, and human rights. As a multidisciplinary policy area, data is being addressed from economic, security, technological, legal, and human rights perspectives. This is known as data diplomacy. 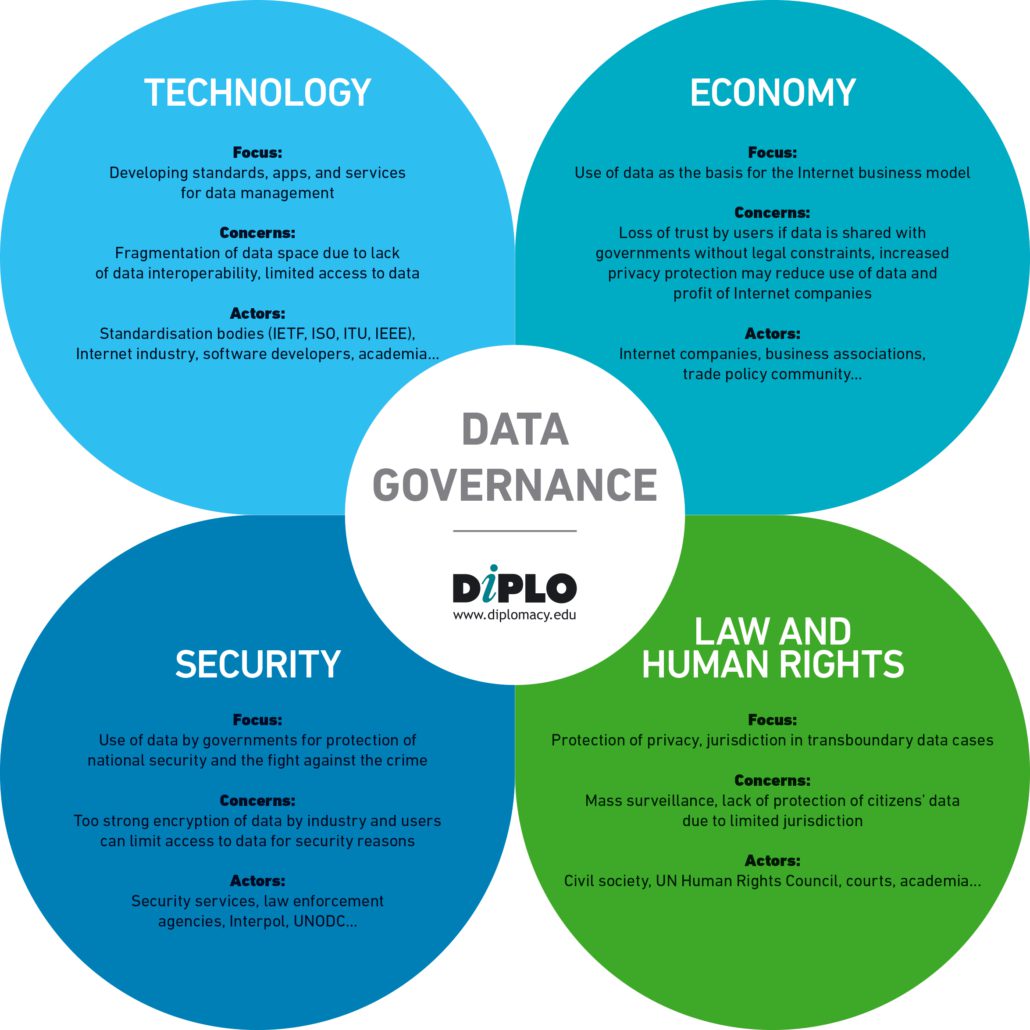 Data diplomacy is also a multi-level issue, addressed on bilateral, regional, and global levels. One of the main bilateral negotiations, between Europe and the USA, centres on the status of European citizens’ data in the USA. The transfer of data across the Atlantic Ocean is one of the main data ‘highways’ in the world.

On a regional level, European organisations such as the Council of Europe and the European Union are particularly active in developing data protection policies and rules. For example, the EU’s General Data Protection Regulation, which carries strict data protection requirements and is expected to have a major economic, social, and political impact on the digital world, will enter into force in May 2018.

At a global level, data is addressed by a wide range of organisations. Within the World Trade Organization (WTO), data flows are often referred to in policy discussions on e-commerce. The UN Government Group of Experts on Developments in the Field of Information and Telecommunications in the Context of International Security – the key global cybersecurity forum – is addressing the issue of the protection of data from cyber-attacks. Various public and private organisations work on data standards to ensure interoperability in the data ecosystem. The UN Human Rights Council focuses on privacy protection and other digital rights.

Data, together with information and knowledge, is at the heart of diplomacy. In their daily work, diplomats collect, analyse, and communicate data, information, and knowledge.

Data-driven changes are already affecting the main functions of including representation, the protection of nationals and consular assistance, negotiations, information gathering, and promoting friendly relations (Article 3 of the Vienna Convention on Diplomatic Relations).

Although data has always been part of diplomacy, the advent of digital technology has created new forms of data, most notably big data, web-data, satellite data, and crowd-sourced data, which provides opportunities for diplomatic activities and could make them more efficient, effective, and inclusive.

For example, data provides opportunities for diplomatic reporting, one of the core activities of diplomatic services, and part of a diplomat’s daily routine. Diplomats report to the UN and other organisations on their respective country’s performances in almost any field of multilateral activity, including health, security, and human rights. This puts pressure on both producing and analysing reports. An effective use of open data and data-mining could make countries’ reporting more efficient and effective.

In addition, internal reporting from missions, visits, and negotiations are the lifeblood of diplomatic services. Any important activity and meeting is recorded in written reports and sent to the capital. With the use of data, diplomats can make reports more evidence-based, challenging assumptions and biases. They can also use data-mining to identify patterns and correlations that can, in turn, trigger new initiatives and diplomatic actions.

Although the use of (big) data in diplomatic reporting is still relatively novel, ministries of foreign affairs (MFAs) have already started to use new forms of data for other activities. Consulates manage large databases to issue e-visas and monitor nationals abroad. These databases also enable them to timely assist citizens in emergency settings. In public diplomacy, MFAs are increasingly adopting big data tools to understand the public image and discourse related to their country on social media platforms, and to be able to craft targeted messages to different key audiences. In development co-operation and humanitarian aid, big data has enormous potential as an early warning system, and to better target aid and deliver it more expediently.

How can diplomats be better equipped for the data-driven era?

Early initiatives on data diplomacy have started developing. For example, the British Foreign and Commonwealth Office plans to establish a Data Director and to strengthen the use of data-mining, as announced in its recently published report, Future FCO. Other diplomatic services are exploring data diplomacy from a multidisciplinary approach, taking into consideration the skills that diplomats need to harness the benefits of data.

The Finnish MFA is also looking at the impact of big data on diplomacy, and commissioned DiploFoundation to conduct policy research on the subject. As part of this research, a first roundtable, held in Geneva, brought together diplomats and practitioners from international organisations to address (big) data in diplomatic reporting, humanitarian affairs, public diplomacy, development, and sustainable development goals. Questions of data security, data generation and management, and the limits of (big) data were also tackled.

The current study and research point to several recommendations, including the need for capacity development and awareness-raising in organisations about the potential, management, and challenges of data, and the need for enhanced management of existing data to ensure user-friendly access. Additional recommendations and practical uses of data in diplomacy will be further discussed during the second roundtable in Helsinki.

This blog post is the start of the Reflections on Data Diplomacy series of posts. We invite you to follow this blog for more reflections and further updates on data diplomacy over the next weeks.