You are here: Home1 / What is e-politteness? 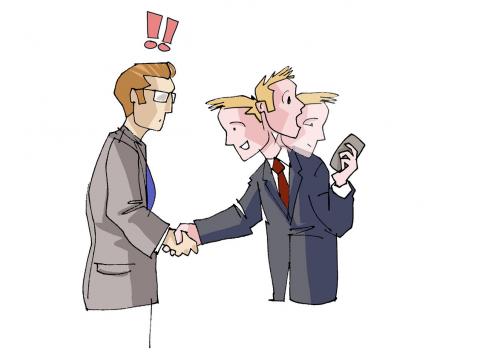 All of this has made me wonder whether the Internet has changed our view on what is polite and what is not. In addition, in diplomacy – an area of professional interest for me – politeness (or the lack of it) can have serious consequences. It can be seen as a part of diplomatic signalling, leading to all sorts of unexpected developments.

History provides a few examples. Some authors argue that World War I was triggered by the misuse of telegraph communications. Polite and impolite, conciliatory and hawkish cables were passing each other between St Petersburg, Vienna, Berlin, Paris, and London, contributing to the confusion of the summer of 1914 and, ultimately, to the start of the war.

Before we discuss e-politeness though, let us reflect more on politeness in general. Politeness is much more than how we handle a knife and fork properly, or smile at neighbors in the elevator.

Politeness as a lubricator of social interaction has long attracted the interest of philosophers and thinkers.[1] Aristotle’s extensive writings on moderation had politeness as an underlying theme. Cicero continued the discussion in Decorum, arguing that everyone should behave according to his or her place in society (age, rank, and sex).  Nowadays, Cicero would be uneasy, seeing old people wearing ear rings and dancing in discos.

Politeness is mainly an urban phenomenon. It resurfaced in the renaissance Italian cities, and later on in London cafés after the Glorious Revolution of 1699.

In renaissance Italy, manuals on proper behaviour were very popular. Best-sellers of the time were Galateo by Giovanni Della Casa and Courtier by Baldassare Castiglioni. While many of the rules of etiquette in Galateo have survived until today, the rule about not checking mail in the company of others would be difficult to implement now. To be ‘cool’ in renaissance Italy was to show sprezzatura, as described in Courtier. Manuals of etiquette were inspired by the premise of not offending others, and ensuring peaceful relations in communities.

After renaissance Italy, the next important development in the history of politeness was during the British Glorious Revolution. The culture of politeness flourished in London’s coffee houses.[2] Politeness was a way to achieve ‘social mobility’. Proper behaviour was a way to gain entrance to a higher stratum of society.  During that period, the first philosophy of politeness was written by Ashley-Cooper, the 3rd Earl of Shaftesbury, in 1711 (Characteristics of Men, Manners, Opinions, Times). He put conversation at the centre of politeness. Since the core of conversation is equality, he argued that politeness requires that people be treated on equal terms. For him, politeness was natural, since human beings are good, and empathetic. Only by understanding other people’s feelings can we respond to them politely.

Politeness and codification of diplomatic protocol

But back to politeness in our time…

The first is postponing difficult or complex decisions. This is a well known procrastination mechanism, but in the Internet era it has taken a new form. Before the Internet, there were administrative mechanisms that forced us to address difficult issues (ultimately, the law is the social system that proposes procedures and tools for dealing with conflict and difficult situations).

The Internet breaks barriers and gives us the freedom to organise our time. But, technology also leaves us to our own self-discipline, which is individual and – often – missing. Routines, rituals, and procedures (including protocol) are usually associated with past unnecessary complications in our highly functional world. But, we may witness their renaissance in our attempt to deal with our priorities and re-establish a balance between the enormous possibilities of the e-world and our existing natural limitations – including 24-hour days.

I label the second group of pending messages ‘lost in translation’. These are mainly related to the lack of understanding of a situation, where my interlocutor could not grasp the social or policy context. A lack of understanding of the context in which someone will read our message is one of the major problems in e-communication. In the past, when we spoke to each other or, even wrote letters, we had more time; we used signals to understand the other side. An Internet communication, including e-mail, often does not give us the necessary context, starting from trivial issues, such as the weather ‘on the other side’ (a rainy spring in Geneva affecting the mood of all of its inhabitants), up to more complex issues containing social and cultural contexts. An e-mail can marshal facts, but very often the same facts do not employ the same perception. When I get ‘lost in translation’ types of messages, I usually delay discussion for a face-to-face meeting, or at least a voice talk.

The third cause for my delayed answers is the quality of the e-mail. If someone takes the time and energy to write an e-mail that goes beyond e-small talk, it obliges me to reciprocate properly. A one-line reply won’t work in such cases.  High quality messages are often put aside for proper reflection, when I have more time. This time rarely comes, and the message continues to haunt my sub-conscious. Increasingly, I hint to my friends not to write me ‘serious messages’.  Some of them turned to Twitter as a lighter form of communication, but – paradoxically – tweets can be very thoughtful; as the old adage goes ‘I did not have enough time to write a short letter’.

The fourth pattern in my e-procrastination comes from a kind of Internet social ‘ping-pong’. The speed with which another answers my messages often affects the dynamic of my replies. If someone replies to my message after a few weeks, I tend to reply with a delay, instead of my usually prompt response. This intuitive insight seems to be backed by very solid research in communication theory, which shows that in communicating, we often negotiate. For example, in dialogues we tend to fine-tune our voices to the pitch and volume of the voice of our interlocutor. If our interlocutor speaks loudly, we tend to get louder, and vice versa. Try it next time in your conversation! E-communication is a form of negotiation as well. Delayed replies to our messages make us delay our replies in turn. 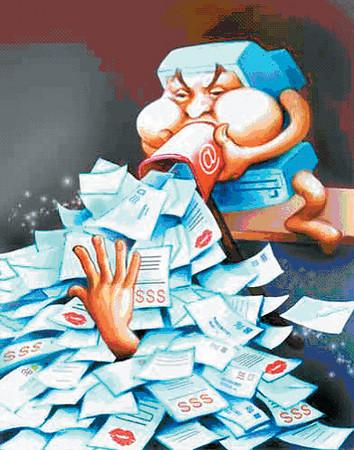 Have I been impolite? Yes. But (whoever invented the word ‘but’ should be praised), my impoliteness can be explained and – inshallah – justified.  The above-mentioned reasons for impoliteness are related to the transition between two eras. Can we use the criteria of the pre-Internet era to judge behaviour in a completely different current environment? In the past, not replying to a letter, or not answering a phone call was impolite. But we used to receive only a few letters or postcards a month. We had time. Today, except for the title, ‘e-mail’ is not mail in the sense letters or postcards are. E-mail is some sort of mix of small talk and talking to ourselves by talking to anyone (or everyone, by sending e-mails to more than 10 recipients). I refer to e-mail in this text, since it is the most conservative of the Internet’s communication tools. A more complex concept is politeness in using Twitter, Facebook, and blogs, to name a few social media tools.

With its short history, e-politeness still needs more solid reflections.  How can we understand the context in which others live? How can we develop e-empathy? What are the new rituals that we should develop in order to reduce tension in our e-communication and ensure e-politeness? The list of question continues…

At this point, I have to stop writing. Otherwise, in this era of short and instant communication, the length of this text could qualify it for impoliteness.  If you are in Geneva, please join us for a discussion on e-politeness at the Geneva E-participation Day (19 June 2013). Otherwise, it’s over to you for your online reflections on e-politeness…..

[1] Although he was not particularly polite personally, J.J. Rousseau included politeness in his philosophy by describing it as a reflection of the genuine internal self.

[2] Coffee houses are both real and metaphorical places. As real places they exist. But, metaphorically, they are places for public discussion..

Hierarchy is here to stay