We are in the middle of an eventful year in Internet governance. The first six months have been marked by numerous IG events and high visibility of IG in global discussions.

Our June IG webinar, which took place on Tuesday, 26th June, reflected on the main developments that took place during the first six months of 2012, and discussed future developments likely to evolve till the end of the year.

During the webinar, we revisited the list of main developments for 2012 which we had discussed during the January IG webinar, and ranked them again.For each main development you will find its current ranking (first number in bold) and the predicted ranking (the second number, in parentheses). 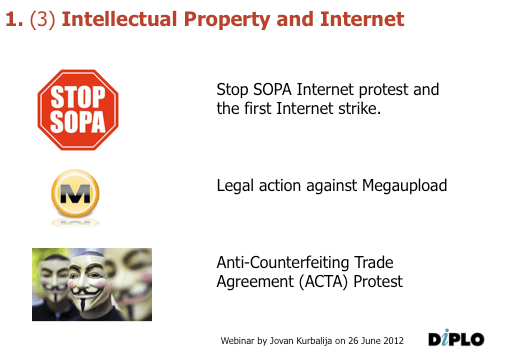 The Internet, with its ethos of sharing and openness, has been challenging copyright and other intellectual property rights.  This tension accelerated in January this year with the US Congress discussions of SOPA (Stop Online Piracy Act). SOPA triggered a global online protest, including the first Internet strike, resulting in the US Congress decision to shelf the SOPA proposal. In the same spirit, Europeans reacted to ACTA (Anti-Counterfeiting Trade Agreement) organising protests in European cities and online spaces. Ultimately, ACTA was shelved.  Simultaneously to ACTA protests, the US government used regular legal mechanisms, and initiated legal action worldwide against Megaupload, one of the biggest file storage services. The legal basis was found in Megaupload’s major breach of intellectual property rights. For the summary of the January IG developments consult the chronology of the main events.

A few months later, after the dust has settled, one can observe the following main realisations:

• Major IG issues cannot be negotiated secretly (ACTA)
• Legal developments in the USA affect the whole world (global nature of SOPA protest)
• Protection of IPR on the Internet could be a backdoor for influencing Internet governance, including issues such as human rights on the Internet, cybercrime (SOPA and ACTA)
• Traditional legal mechanisms can be used for global Internet governance as well (Megaupload)

IPR on the Internet will continue to be one of the core IG issues. However, till the end of 2012, one should not expect any major development due to the USA Presidential elections. The main legal and political developments on IPR and the Internet have been coming from the United States. It is not likely that this issue will stay in first place on the IG development list till the end of the year. 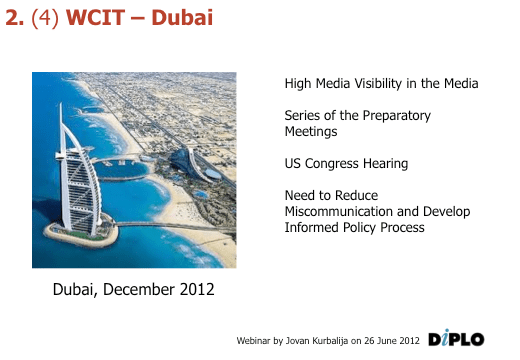 The World Conference on International Telecommunications (Dubai, December 2012) has become one of the hottest Internet governance issues. The WCIT will amend the International Telecommunication Regulations (ITR) for the first time since 1988. The main issue is if, and how, the amended ITR will affect the future of the Internet. The debate over this question triggered a highly politicised discussion with quite a few simplifications and misperceptions. The most alarming coverage came from the Wall Street Journal, which argued that through the WCIT 2012, the ITU (or United Nations) would try to impose its control over the Internet. This was also the echoing message in the US Congress hearing on WCIT. The New York Times provided the most balanced views, pointing to the limited possibilities of the WCIT to reshape the current Internet governance space.

One of the changes compared to the previous ITR of 1988, is the inclusion of the right to access to the Internet, in the ITR draft text. It is the main shift of the ITR beyond its traditional, mainly technological, realm. Vint Cerf’s article ‘Internet access is not a human right’ in the New York Times on 4 January heralded a very busy year in Internet governance. Internet and human rights featured as number one on the January 2012 list of the most important IG developments. Cerf’s article triggered a lively debate that centred on the question of where to position the issue of human rights on the Internet. The debate mirrored the discussion on human rights in the non-Internet world. Some, like Cerf, argued mainly for civil-political rights such as freedom of expression. This view has dominated the discussion on Internet and human rights, including in the UN Human Rights Council. In parallel, there are an increasing number of arguments that Internet and human rights should go beyond civil-political rights and extend to socio-economic rights, mainly the right to access to the Internet. The main development is the inclusion of this right in the early drafts of the ITR.

Internet and human rights will remain high on the Internet agenda. The main discussion will revolve around the civil-political vs socio-economic rights dichotomy. Strong efforts should be made to overcome this, to a large extent false, dichotomy. It is possible to have both civil-political and socio-economic rights. The main coming development could be a more prominent role of players such as Brazil and India, developing countries with a strong Internet sector and the high level of observance of human rights.

Update on 29 June 2012: The United Nations Human Rights Council adopted the resolution on the promotion, protection and enjoyment of human rights on the Internet (see: the resolution text; the article written by Carl Bildt). 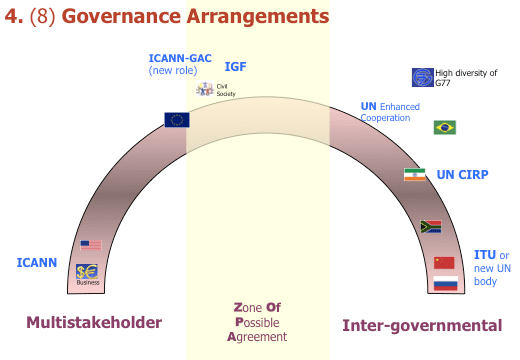 The beginning of the year marked a continuation of the search for an IG formula, which would amend the existing ’Tunis Compromise’. The Tunis Compromise, adopted at the WSIS-Tunis summit in 2005, established the Internet Governance Forum (IGF). With the IGF, most developed countries, which opposed any inter-governmental arrangement, got a space without decision-making power. As a part of deal, developing countries got the first institutional space in the UN system where Internet governance issues could be discussed. As with any true compromise, initially nobody was happy about it. Gradually, the IGF gained its space and relevance. In accordance with the WSIS recommendations, the review process for the IGF started in 2010. While this review has been making its way through the complex UN system, the main underlying question is if, and how, the Tunis Compromise should be changed. The United States and the business community are strong supporters of the status quo, maintaining the IGF, like ICANN, as a multistakeholder body. They also oppose any shift towards decision-making by the IGF. On the other side of spectrum are Russia and China, who argue that the Internet should be governed by inter-governmental organisations such as the ITU.

Other options include the creation of a new inter-governmental body, including the most elaborate proposal by India, to establish a UN Committee on Internet (UN CIRP). The European Union and most of civil society has been trying to create a zone of possible agreement, which will keep the best of the multistakehodler approach to Internet governance, and accommodate requests of governments for a more prominent role, especially in dealing with public policy issues. Negotiations will ultimately focus on the phrase ‘in their respective roles’ of the definition of Internet governance. What are the respective roles of governments, international organisations, civil society, business and technical communities?

The search for a global Internet governance formula will continue. While it is not clear how it will be shaped, it is certain that it must involve the IGF, ICANN and the ITU in their ’respective roles’. 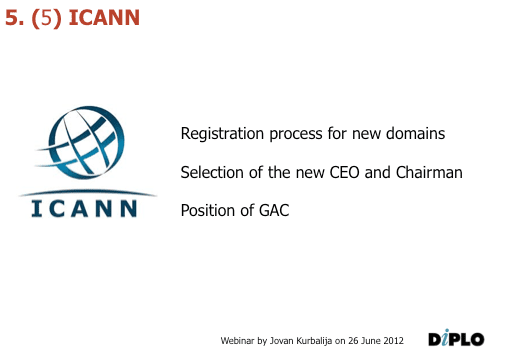 The first part of the year has been decisive for ICANN. In January, it initiated a grand policy experiment of opening the registration process for new domains. ICANN did this during a difficult phase of leadership crisis. Significant problems were caused by glitches in the software for the registration of new domains. Some of the application data were made accessible to competition and this could trigger legal processes against ICANN. The success of the introduction of new domain names will have an important influence on the future of ICANN and indirectly on the multistakeholder approach towards Internet governance.

Lastly, ICANN continued the highly complex process of integrating governments into its modus operandi through the Government Advisory Council (GAC). The GAC has recently been gaining a more prominent role in the global IG process. 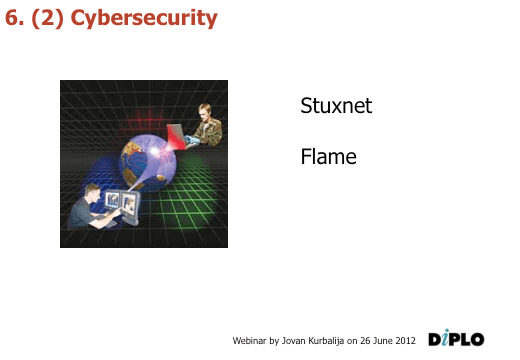 Over the first six months of 2012, cybersecurity had two important developments. Stuxnet and Flame made cybersecurity issues highly visible in the global media. There are hundreds of articles written on the use of cyber tools for military purposes, and Stuxnet and Flame are considered to be the most prominent examples of such use. At the same time, over the last six months, the cybersecurity policy process was not particularly active. Unlike the intellectual property and human rights aspects of Internet governance, there have not been any major initiatives and events in the field of cybersecurity. However, cybersecurity does remain a regular issue in the various global Internet governance policy processes. 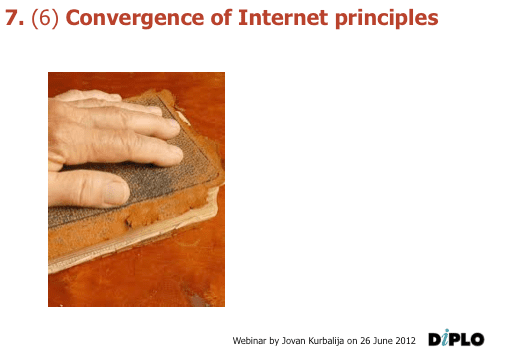 It is likely that this process will further develop in the context of the Internet Governance Forum. 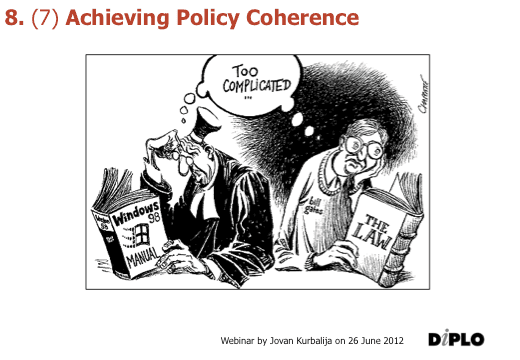 Internet governance lacks policy coherence. It is a policy field in the making with the same IG issues tackled in different policy silos. For example, ACTA was negotiated by intellectual property policy makers, but it had numerous consequences on security and human rights, to name two particularly important areas.  In governments, there is a clear trend towards covering IG issues in a comprehensive way. It will also affect international processes, by causing governments to put more pressure on international organisations, to overcome existing barriers and address IG issues in a comprehensive way. The first signals of a comprehensive approach are appearing. For example, a Canadian Internet issues diplomat in Geneva covers a wide range of issues, thereby overcoming the traditional silos approach. It is a slow approach, that will accelerate at some point. In the first six months of this year, this was not the case. It is also realistic to expect more concrete moves towards policy coherence from now until the end of the year.

We invite you to listen to a live recording of the webinar, in which Dr Kurbalija also discusses questions and comments posted by the webinar participants, including: whether events like the Arab Spring and London riots may have influenced governments to turn towards the UN or ITU for managing the Internet; the link between cultural diversity and global consensus when it comes to human rights; and many others. You can also download the PowerPoint Presentation here. To receive news, announcements and follow-up e-mails regarding our IG webinars, subscribe to our IG webinars group.

Fourth edition of ‘An Introduction to Internet Governance’ in A...A very public tiff on Twitter
Scroll to top