You are here: Home1 / [Webdebate #16 summary] Exploring digital diplomacy as a ‘new diplomac...

Paque introduced the debate by highlighting that digital diplomacy, or e-diplomacy, is much broader than the use of social media by diplomats and others. It includes Internet governance debates and digital policy-making. With regard to social media and Twitter diplomacy, she questioned whether their use constitutes a distinct area of diplomacy or rather simply a set of tools used to extend diplomatic communications. Further, she wondered whether Twitter diplomacy can actually help to resolve differences and further understanding – two key ingredients of diplomacy.

Manor focused on the advantages and limitations of using social media in diplomacy, in particular on the ways in which some MFAs have used social media successfully to overcome some of the limitations of traditional diplomacy. He began his intervention by outlining three reasons for the turn to digital diplomacy: the US desire to counter-act Al-Qaeda’s online recruitment, the Arab Spring, and the idea of practising a new public diplomacy (marked by the desire of diplomats to create long-term relations with foreign populations, as opposed to focusing only on foreign governments).

Manor used three examples to underline his case that the use of social media can overcome some of the limitations of traditional diplomacy. His first example, Virtual Embassy Iran, was launched in 2011 by the US. Since the US has no diplomatic ties with Iran, the virtual embassy is used to engage in public diplomacy and, to a certain extent, to replace a brick-and-mortar embassy. It focuses on engaging Iranian citizens via public diplomacy, advice for studying in the US, and visa-related services. In his second example, Manor referred to the launch of Israel’s Twitter embassy to the countries of the Gulf Cooperation Council. The idea here is to overcome traditional gatekeepers and communicate directly with audiences in theses countries, in order to explain Israel’s foreign policy. His third example was Palestine in Hebrew, which was also launched in 2015 and is a virtual embassy of Palestine to Israel, created with the aim of communicating a positive and credible vision for the future of the Palestinian state and its values.

Looking towards the future of digital diplomacy, Manor argued that we see a move from relationship building to creating strategic narratives, which offer an interpretative framework and aim at controlling the media environment. This also means that social media portrays different realities with different narratives promoted by various actors. Not only does this lead to contestation, it also harbours a potential problem, because ‘without reality, diplomacy cannot function’.

Three specific future trends that he sees are investment into algorithms for social platforms to create tailored diplomacy, use of bots (dedicated social media programmes) that are deliberately employed to promote a tailored version of social reality, and an increased use of artificial intelligence (AI) in consular affairs and public diplomacy.

In her contribution, Höne focused on civil society and social movements in digital diplomacy, paying particular attention to Twitter as a tool for communication and potential empowerment of non-state actors. She emphasised that digital diplomacy is much more than social media use, but that it is useful to explore the potential of new technology to empower new actors.

Höne used three examples to make her case. First, she discussed the so-called Twitter revolutions and their relevance for digital diplomacy.  We often hear the argument that Twitter played an important part in supporting social movements and protests in Moldova (2009), Iran (2009-2010), and Tunisia (2010-2011). Yet, she warned that technology is neutral. In other words, in almost equal measure, social media offers unprecedented opportunities for communication and connection but also control and suppression. In terms of social media as a tool for diplomacy, she argued that it allows for monitoring, reporting, and perhaps even predicting the situation in another country. Social media also emerges as a useful communication tool in times of crisis.

Second, Höne used the example of the Occupy Wall Street movement to highlight how so-called scale shifts happen on social media. As part of Occupy Wall Street, physical protests in the streets of New York and other cities around the world occurred in September 2011. It is interesting to note that the hashtag #OccupyWallStreet appeared several months earlier in July. It can be observed how this hashtag gained traction, how low-level re-tweets and re-uses occurred for a few days and then how a scale shift from 100-500 to 10 000-30 000 tweets per day happened by September. She cautioned that while there is potential for prediction, we need to keep in mind that this is not an exact predictive science. Occupy Wall Street protests could not have been predicted exactly by simply looking at the use of the hashtag. Yet, in some cases, spikes in the use of the hashtag fall together with key moments in the history of the movement.

Höne ‘s third example looked at how the Youth Climate Justice movement uses Twitter during the yearly Conference of the Parties of the UN Framework Convention on Climate Change. Activists follow the diplomatic discussions and issue critiques, and engage in naming and shaming. This happens in situ but is also reflected on social media. The question for diplomats raised here is how to engage with these uses of social media by civil society and social movements. At the very least, monitoring can yield important insights about the direction of the discussion.

Based on questions from the audience, the participants also debated the potential for big data and AI in diplomacy, the aspects of control of social media access by governments, and the need for foreign ministries to adapt to a changed social media and communication environment.

(The writing of this summary was supported by Mr Luka Radjenovic, an intern with DiploFoundation)

The economic impact of data centres 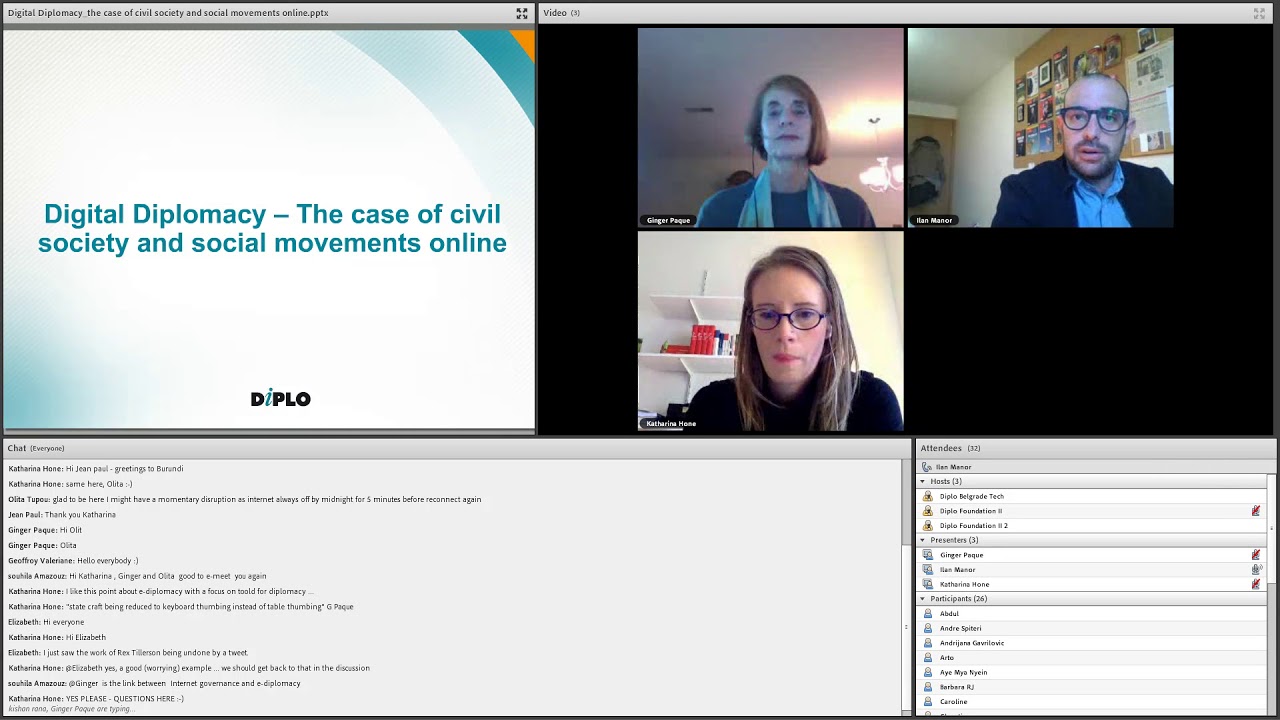 The Importance of Data in the CARICOM RegionBRICS: a new decision-maker in global governance?
Scroll to top