You are here: Home1 / US Presidential Elections – and the candidates’ stance on digital p...

US Presidential Elections – and the candidates’ stance on digital policy

With contributions from Curators of the GIP Digital Watch observatory

The United States presidential campaign has polarised positions around many issues. For the most part, many of them make sense in the US political context. A few, such as future digital and Internet governance policy, are important for the global audience. While it’s not easy to discern the candidates’ real positions from the plethora of ‘she said/he said’ wrangling and fact checking, we’ve put together some highlights of election rhetoric on digital policy.

Both candidates have addressed a large number of digital policy issues in their public speeches, from deploying infrastructure to introducing taxation. The difference between them seems to be their understanding of the optimal balance between promoting security and protecting freedoms and the level of detail with which these issues are tackled.

Hillary Clinton’s overarching vision on Internet policy has been expressed in the Initiative on Technology & Innovation. She believes that Internet governance ‘should be left to the global community of engineers, companies, civil society groups, and Internet users, and not to governments’. This seems to express a continued commitment to the multistakeholder approach, which has characterised US participation in international forums. This also seems to be consistent with her position on the transition of the US stewardship role over the IANA functions to the global community.

The IANA transition – which was a hot topic outside the USA – did not garner significant attention from the US audience. In spite of this, the issue has established a clear division line between both candidates. While Clinton supports the transition and mentioned that it was ‘a critical step towards safeguarding the Internet’s openness for future generations’, Donald Trump opposes it, affirming that the USA should not turn control of the Internet over to the United Nations and the international community and assessing that the transition would have negative consequences on Internet freedom, which he says, will be ‘gone for good’, and for US national security.

Both candidates have paid significantly more attention to cybersecurity if compared to other digital issues. They seem to believe that this will be one of the key challenges that the next president will face. The USA need to be better prepared in the future, either to protect themselves from non-state and state actors – Clinton textually mentioned the possibility of attacks from Russia – or, as Trump highlighted, to launch crippling counter-attacks against opponents. Both have promised to use a strong hand against terrorists, in particular ISIS.

When it comes to citizens’ rights, Clinton has called for a balanced approach between ‘liberty and security’ and she ‘rejects the false choice between privacy interests and keeping Americans safe’. In spite of this, she doesn’t take a clear stance on encryption, as she mentions that law enforcement should be able to circumvent it, provided that the necessary checks and balances are in place. Trump has openly said he would restore some of the NSA’s spying programmes. He also called for a boycott on Apple products after the company refused to break its encryption at the request of the FBI. Here is a synopsis of digital policy stances held by the two nominees (available also in .pdf format with active links): 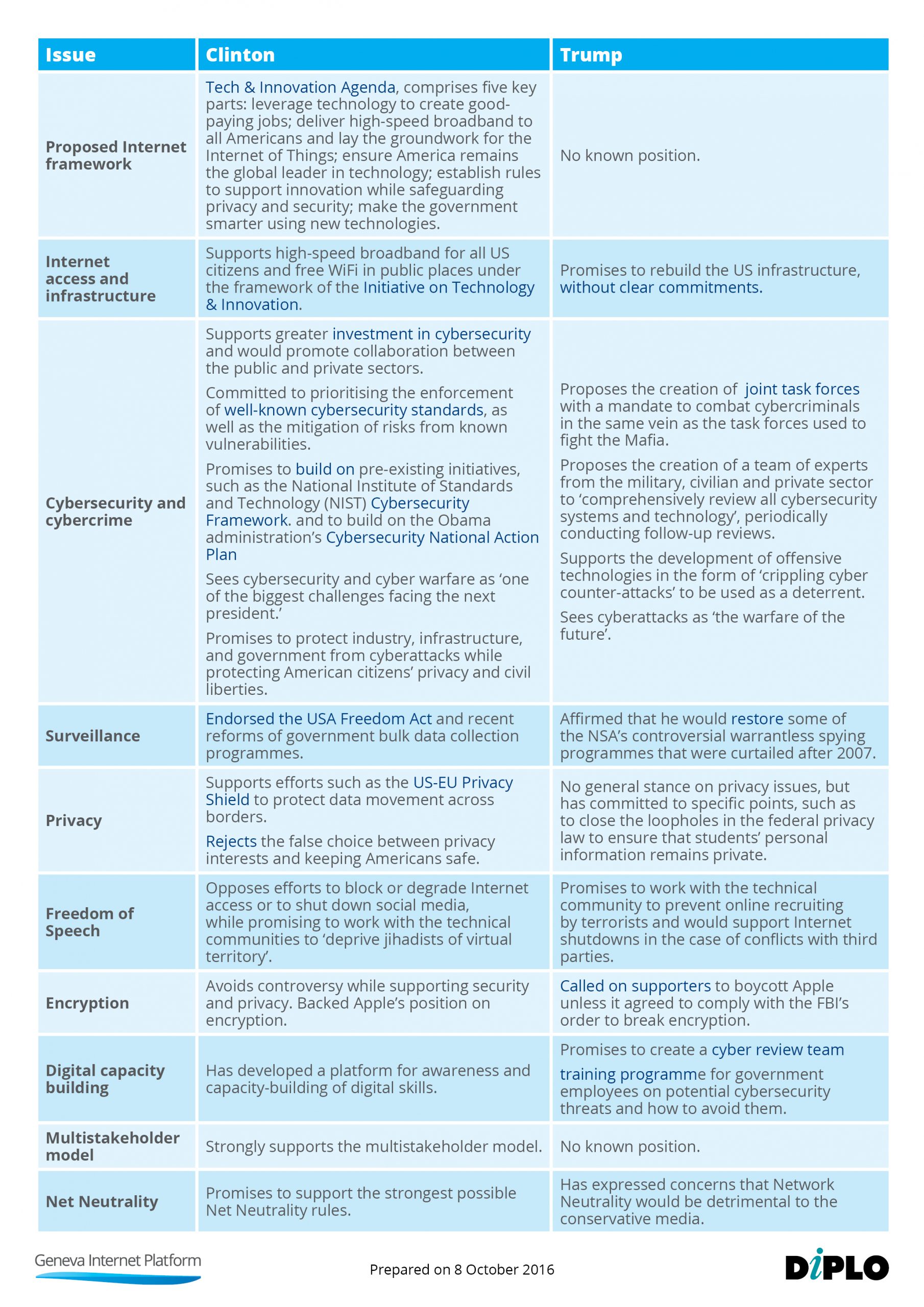 The candidates’ positions are also analysed on the GIP Digital Watch observatory.

It’s a big week for ISOC

Five reasons why Guterres’s election as UN Secretary General is VERY good...Internet and Development: A Reality-Check
Scroll to top