You are here: Home1 / Twiplo-blunders: they’re fun, and necessary

So we all like a good laugh, especially at the expense of important people, which is why pricking pomposity and mocking self-importance has become such a popular sport online (and why anxious, threatened politicians who wish for a more controlled world, in the sense of controlled from the centre, continue to try and ban the spaces like Facebook where anarchy can find a corner to play). And, of course, those politicians (and diplomats, perhaps) who are eager to shine in the social-media-sphere but too busy – or unwilling – to learn the language and culture of the platforms are to some extent at the mercy of enthusiastic, often younger, communication professionals charged with generating views, and re-tweets, and likes and more. 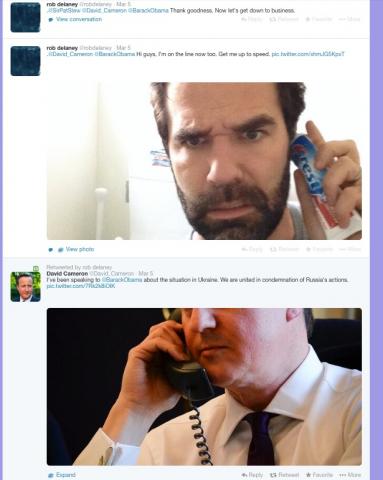 I say this to allow the UK Prime Minister the benefit of the doubt about whose idea it was to publish a ‘selfie’1 at the end of a phone call to President Obama. The PM is looking suitably statesmanlike, which is possibly why it seemed a good idea. And done in a flash, so easily, but also so instantly globally, public. It’s almost impossible to predict what will tickle somebody with time to kill and enough skills and wit to generate a response that goes viral on the Internet, but this one has – at least in the US/UK media. The response was almost instant, with US comedian Rob Delaney sending in a parody picture of himself, ready to join the conversation, which was quickly followed by other pictures and other mocking responses, all gleefully picked up in the UK media, even in papers supportive of the PM.

It’s precisely the positive attributes of the Internet in general and social media in particular – the geography and time-span defying immediacy and range of online platforms – that is the black hole into which the unwary can be sucked. Staying with Britain, the hapless Ambassador to Chile landed himself and the UK in serious trouble with a tweet, in Spanish, that many Chileans found insulting. It was too late to explain that the tweet was meant to be a private text to a friend, arguably compounding the error, especially as amateurishness is a tricky defence at the best of times: the tweet was out and had gone viral. Of course, Jon Benjamin is in good company. Sebastian Pinera, the President of Chile (for four more days!) was an early adopter of Twitter in 2008 and regularly provides good copy for journalists, through spelling mistakes and his famous, ‘Looking at Tierra del Fuego….’ tweet. And it’s a fine line between vigorous engagement in the public space, typified perhaps by the online turmoil around ex US Ambassador to Russia, Michael McFaul, and being seen to be openly partisan about opposition figures, as the US Embassy in Cairo  experienced last year.

But it’s no accident that these examples come from US and UK diplomatic services, since both have been vocal and determined in arguing for the power of social media and the need to get out there, and take risks.  And one of the UK FCO’s social media leaders, @HMATomFletcher, illustrated the same energetic approach in a tweet yesterday, `Looking forward to joining #FCOcomms conf later to discuss campaigns: think like insurgents, anchor in national interest, start arguments’. He is also good at pithy aphorisms, so he has the last word: “we all make many mistakes on Twitter. The biggest one is not being there”

1. Busy people, especially those without children of a useful age, may not know the term, ‘selfie’- a self-portrait snapped using a mobile phone, and published on social media (and maybe fun for you and your friends, except if you are a public figure, in which case selfies of you and President Obama can take on a life of their own

What is e-participation: revisited

Save the InternetInformation overload?
Scroll to top