You are here: Home1 / The philosophy of the preamble to the Vienna Convention on Diplomatic ...

The Vienna Convention on Diplomatic Relations (VCDR), alongside the Vienna Convention on Consular Relations (VCCR), presents the very essence of diplomatic and consular law, as well as of diplomatic theory and practice. Both conventions were adopted and put into force 60 years ago – the VCDR in 1961 (61 signatories) and ratified in 1964 (192 ratifications), and the VCCR in 1963 (49 signatories) and ratified in 1967 (182 ratifications).

Having in mind the time sequence, structure, and their correlation, the VCCR derives from the VCDR (compare the third and fourth clause of the VCCR‘s preamble, as well as the second function of a diplomatic mission), but they share a complementarity and not a hierarchical correlation.

It is fascinating to see how few international legal documents have since received the unprecedented number of ratifications, and how few are being accepted, respected, and implemented universally. Hence, they are also interpreted, discussed, and elaborated on by numerous research papers, experts, and empirical views. However, almost by rule, these writings focus on legal and protocol descriptions, and interpretations of both documents. This means that we face their continual reinterpretation.

This post looks at the VCDR with the aim of discovering what lies in and behind the text, with a focus on the preamble and its philosophy.

The preamble to the Vienna Convention on Diplomatic Relations

The philosophy of the preamble to the VCDR preamble helps us understand the interdisciplinary, interrelated, structural, and contextual comprehension of its mission.

The preamble is far from being a mere introduction to the main body of the text of the convention. We grasp it as a political manifesto of states (the parties to the convention) as it reflects their compliance will maintain international peace and security. Consequently, it also reflects the concept of diplomacy, exhibiting a relentless drive for peace, security, and the promotion of friendly relations among nations (the fifth function of a diplomatic mission). Last but not least, it cements a broad, clear, and firm legal background for what diplomats do. It is characterised by tradition, continuity, and flexibility, and oozes respect, mutual consent, and ethics. There is a continuous ambition for these aspects to be present on a daily basis in diplomatic practice. 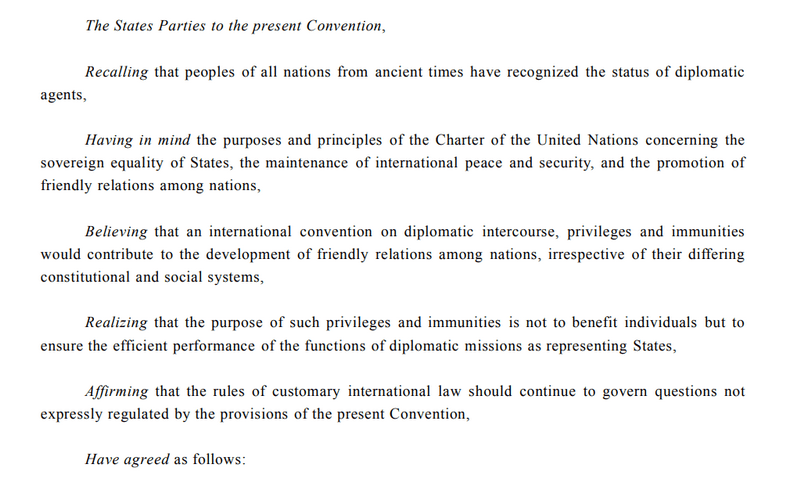 The preamble consists of an opening and closing wording, and five clauses (which could structurally also be viewed as an opening and a closing clause, plus three main clauses). This structure leads to a more substantial understanding of the preamble, offers new insights into its messages, and unveils the authors’ masterpiece, which is very different from a typically dry and formal legal document. Consequently, each clause serves as an independent diplomatic and policy message with a noticeable political connotation.

The opening wording: ‘The States Parties to the present Convention’ opens the VCDR and defines the participating subjects. They are nation states, the main legal actors in the international community in which diplomacy remains an indispensable institution. It draws the reader’s attention to the preamble’s clauses, and introduces its substance, as well as the preamble itself.

The closing wording: ‘Have agreed as follows’, closes the preamble, and opens (i.e. introduces) the main body of text of the document. It also wraps up the preamble as an independent segment that could serve as a mini handbook of diplomatic theory and practice. This is particularly noticeable when taking a closer look at the highlights of each clause, namely: ‘Recalling’, ‘Having in mind’, ‘Believing’, ‘Realizing’, and ‘Affirming’.

With its opening appeal, this clause begins in medias res, and presents a highly condensed definition of diplomacy and almost everything we should know about it. Diplomacy is an old tool for mediating between various entities, one that originated more than 5,000 years ago (‘from ancient times’). In addition to presenting the chronology of the evolution of diplomacy, it also details its tradition. Diplomacy is nothing without tradition and patience. In addition, it cements the instrument of diplomatic immunity (‘have recognized the status of diplomatic agents’) that has been accepted for millennia.

Having in mind the purposes and principles of the Charter of the United Nations concerning the sovereign equality of States, the maintenance of international peace and security, and the promotion of friendly relations among nations

This clause presents the very essence of diplomacy, i.e. the maintenance of peace and security, the prevention of conflicts and wars, and all that diplomacy is about. Diplomacies of sovereign and legally equal states pursue this mission and these principles. Moreover, the promotion of friendly relations among nations constitutes a highly ethical goal.

Believing that an international convention on diplomatic intercourse, privileges and immunities would contribute to the development of friendly relations among nations, irrespective of their differing constitutional and social systems

This clause explicitly declares goodwill and the intentions of states, which presents another ethical dimension, in particular keeping in mind the clear acceptance of differences in the constitutional and social systems of states. It confirms the importance of a legal document that would encompass all these specificities and strengths of diplomacy as a method and tool for managing relations between states. This passage clearly puts forward the common goals of the VCDR’s parties.

This clause reveals what counts as the most important aspect of the VCDR. Namely, that the functionality of diplomatic business goes hand in hand with absolute diplomatic immunity, not for the sake of its holder, but of his or her mission. Diplomacy is a profession, but above all it’s a noble mission, and a diplomatic mission serves the interests of representing states and not those of their sovereigns.

In its closing appeal, this clause assures us of the power of customary law, as well as the trust that parties to the VCDR invested in customary law and in each other. States are free to join the convention, but it is also binding. Again, this is the ethics that is ever-present in diplomatic work and its legal regulations. In addition, the last clause summarises the entire spirit and philosophy of this act, as well as its message and concept.

This is diplomacy: a careful and endless choice of words, and a continuous sending of messages in the legal context, which should always be interdisciplinary, innovative, and well-mannered.

Why Elon Musk Twitter experiment could be a success – even if it fail...French diplomats strike: continuity and change between Richelieu and Macron
Scroll to top