In Internet governance (IG), the need to include SIDS in the process has also just been highlighted in an important document: for the first time since Tunis, the NETmundial community recognised, through the NETmundial outcome document, that participation in the process should reflect geographic diversity and should include stakeholders from this group of countries.

The discussion of our May webinar focused on  the participation of SIDS in the IG process. It was led by Tracy Hackshaw, from Trinidad and Tobago, a Caribbean national, whose participants urged the NETmundial community to include the SIDS’ reference in the outcome document.

During the webinar, Mr Hackshaw, the Deputy National Chief Information officer appointed by his country’s Ministry of Science and Technology, explained the particular vulnerabilities which this group of 52 states spanning the Atlantic, Caribbean and Pacific, face.

In ICT development, the vulnerabilities – including geographical and environmental – meant that until the World Summit on the Information Society (WSIS) phase, the almost non-existent ICT industry saw very slow growth in the midst of a lacking infrastructural, legislative, and policy environment.

Mr Hackshaw explained that the post-WSIS phase, however, was characterised by a tectonic shift which saw the liberalisation of communications, the introduction of mobile Internet and private-public-partnerships, the establishment of national and regional Internet Exchange Points (IXPs), increased government utilisation of the Internet and ICTs leading to government becoming a model user, and new investment opportunities in the ICT industry.

Today, this group of states which is home to over 60 million citizens, has a stronger voice on an international level, but still needs support mechanisms to enable it to participate more actively in the IG and WSIS processes.

SIDS have been particularly active at the Internet Governance Forum (IGF): the Internet Society (ISOC) chapter of Trinidad and Tobago, in collaboration with the Pacific Islands Chapter (PICISOC) has been spearheading a series of roundtables, held during each IGF since 2012. In the September 2014 edition, the roundtable will focus on whether the elements required to promote the Information Society complement basic infrastructural needs.

Despite the involvement of SIDS in these roundtables, Mr Hackshaw explained how other countries failed to see that SIDS are also an important stakeholder. The involvement of other countries, and of other stakeholders such as international organisations, would help promote the views of SIDS and facilitate their participation in the process. One hopes that the International Year of Small Island Developing States will give SIDS a stronger voice across all sectors, including in the IG process. 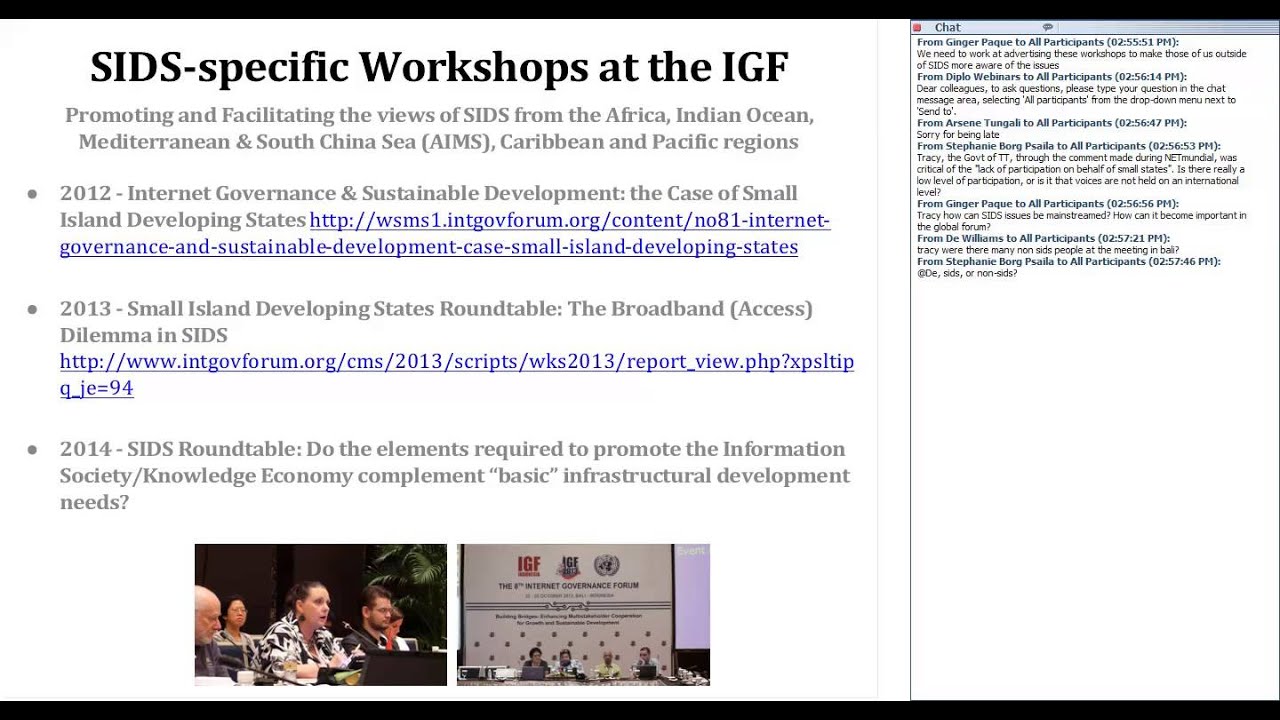 in which Mr Hackshaw also discusses questions and comments shared by the webinar participants, including: the need for a more coordinated approach with respect to issues being faced by SIDS across different forums; the fact that although issues facing SIDS are being discussed at various international meetings, few of them are actually participating, or able to participate, at these meetings; the need to encourage stronger participation from SIDS, including through remote participation; and the fact that SIDS from certain regions like the Indian Ocean are not part of any regional IGFs.

You can also download the PowerPoint presentation in PDF format, separately, here.

The winds of net-war: China warns of US arms race in cyberspaceVisit to Bern and Presentation of policy research projects
Scroll to top