You are here: Home1 / Outcomes of the ITU’s Plenipotentiary Conference

Outcomes of the ITU’s Plenipotentiary Conference

Arduous negotiations, lobbying, and watered-down amendments characterised the three-week ITU Plenipotentiary Conference, which took place earlier last month in Busan, Korea. The aim of the conference was to decide the ITU’s work plan for the next four years, review its Internet-related resolutions, and elect its new leadership.

Our November IG webinar, dedicated to the outcomes of the conference, was led by Samantha G. Dickinson, a name associated with excellent, neutral reporting (and tweeting) from major IG events. Dickinson was in Busan throughout the entire conference, and was able to provide plenty of insight into the proceedings, the atmosphere, and the outcomes.

Attended by over 2500 delegates from 171 member states, delegation sizes ranged from a one-person delegation to over 100, and included 2 presidents, 112 government and department ministers, and 56 ambassadors.

Most of the lobbying took place during the first week of the conference, which saw newly elected Secretary-General Houlin Zhao, Deputy Secretary-General Malcolm Johnson, and bureaux directors take on the leadership of the ITU for the next four years.

The second week focused on drafting and negotiations, which paved the way for debate on geopolitical issues – most prominently the Palestine/Israel and Ukraine/Russia tensions – during week three.

Dickinson explained that significant factors acted as a backdrop to negotiations. While on the one hand, outgoing Secretary-General Hamadoun Touré wished to depart on a high note and leave a positive mark on ITU history, on the other hand the conference was the first major UN meeting since the Snowden revelations. At the same time, member states called for the inclusion of a reference to the sovereignty of states in relation to Internet matters.

She also explained the issues that affected negotiations. The dynamics among states have shifted since the World Conference on Internet Telecommunications (WCIT) in December 2012, a low point for state relationships. Relations picked up again during the World Telecommunication/ICT Policy Forum (WTPF) in May 2013. States are now heading back to pushing what they really wanted.

The USA has regained its confidence since the Snowden revelations, and was very assertive talking about India’s proposal for the allocation of IP addresses. At the same time, the lack of capacity of many member states, especially G77 countries, was apparent during the negotiations, where many remained silent.

What changes were made to the resolutions?

Dickinson explained that despite the long negotiations, no alarming amendments were made, as all those proposals which would have made a significant change did not achieve the required consensus. On the other hand, most of the amendments that did go through were watered-down versions of what was originally proposed. The changes made to the four main Internet-related resolutions are:

Resolution 101 (Internet Protocol-based networks) saw the inclusion of new references to the outcome document of the WSIS+10 High Level Event, and the WTPF-13 Internet-related opinions, as well as additional references to the problem of affordability of international connectivity – an issue which attracted a lot of attention. A reference to IXPs as a way to address connectivity costs was also introduced.

Many of the changes introduced to Resolution 102 (ITU’s role with regard to international public policy issues pertaining to the Internet and the management of Internet resources, including domain names and addresses) were about language. Dickinson explained how the discussions were polarised: there were those in favour of intergovernmental models who talked about international public policy issues and the role of governments, and those who favoured Internet governance and multistakeholder models.

New additions were added to the preamble. General references to UN General Assembly (GA) resolutions and WSIS+10 outcome documents, and a watered-down reference to the work of the Commission on Science and Technology for Development (CSTD) were also added, while the promotion of multilingualism was highlighted.

The revision which added the obligation of submitting the report of the Council Working Group on International Internet-related Public Policy Issues (CWG-Internet) to the UN Secretary-General, after endorsement by member states, could be seen as linking more tightly the ITU’s work on Internet issues to the UNGA. A midway solution to the opposed proposal of opening up the proceedings of the CWG-Internet was the setting up of an open consultation process to be held before each CWG-Internet meeting.

Resolution 133 (Role of administrations of member states in the management of internationalised (multilingual) domain names), which was created before internationalised domain names (IDNs) were deployed, saw the removal of references to telex. Of particular interest was the fact that, despite being no longer relevant, negotiations to remove this term were difficult. This confirms the reluctance by many to establish new resolutions due to the difficulty in amending them.

Interestingly, no direct reference was made to non-governmental organisations, such as the IETF and ICANN, who worked on the deployment of IDNs; instead, the amendments mention ‘relevant organisations and entities’.

States have a legitimate concern about the lack of progress in the transition from IPv4 to IPv6. Resolution 180 (Facilitating the transition from IPv4 to IPv6) therefore remained an important resolution. References to the WSIS+10 High Level Event text, as well as references to ‘stakeholders’ and ‘technical experts’ (as opposed to the originally proposed ‘technical community’), were added.

What was not included?

Many proposals did not make it to the final texts. These included a proposal from the Arab group to have a role in preventing states from spying on each other’s Internet traffic, and India’s resolution to change the Internet architecture. Anything related to surveillance was deleted, which is not to say that the issues were resolved.

Unresolved issues are very like to come up during the UNGA, currently negotiating an ICT-related resolution; in any of the three upcoming CWG-Internet meetings; and at the WSIS+10 UNGA High Level meeting in December 2015, which will coincide with the tenth anniversary of WSIS, where we can also expect the Tunis Agenda to be revisited.

The full recording of the November webinar is available here: 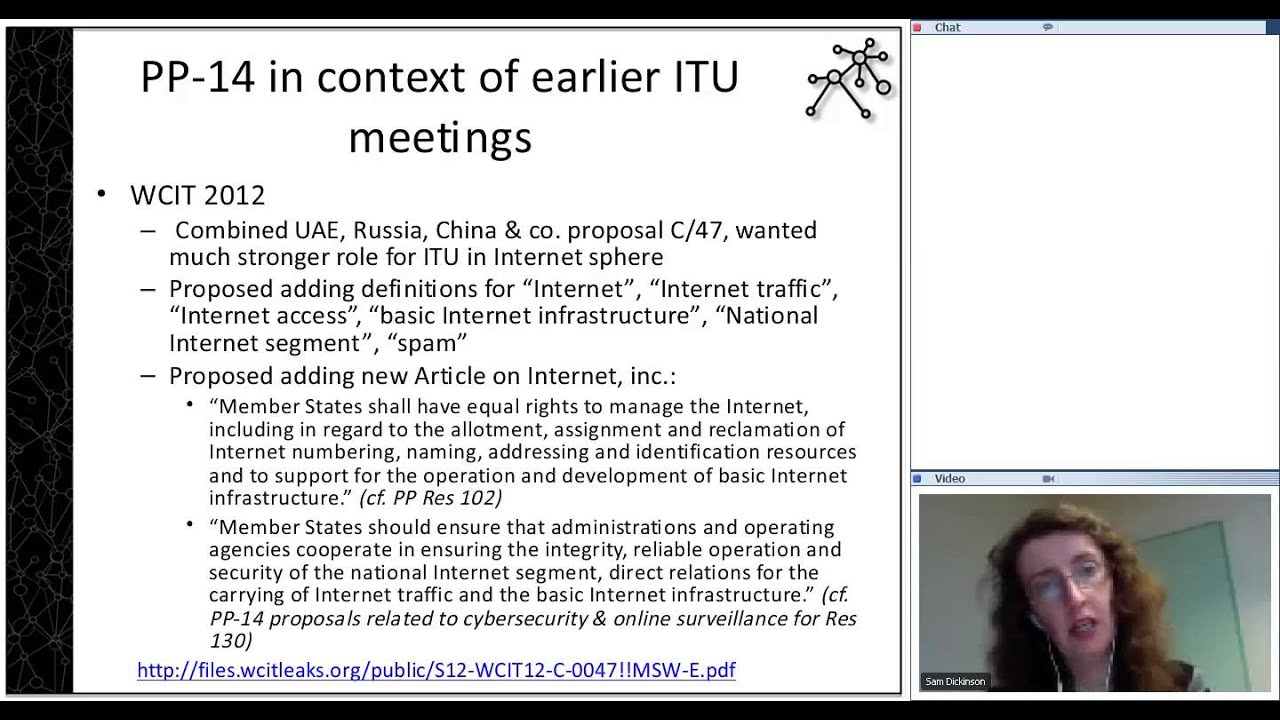 Can an empty chair save COP26?

[Summary] RightOn #11: Communicating human rights: How to win the global ‘battle of ideas’