To assist diplomats in grasping the complexity of this multidisciplinary and multistakeholder political environment, and to bring them up to speed on what to follow, when to follow it, and how to follow it, the Geneva Internet Platform (GIP), operated by DiploFoundation, offers a monthly Geneva Briefing on Internet Governance, besides other activities. The briefing webinars take place online on the first Tuesday of every month at 13:00 hrs (CET). Each briefing discusses the main developments in the previous month and looks at those events scheduled for the coming month. The next briefing will take place on 2 December.

While September was filled with a number of interesting developments related to IGF, NETmundial initiatives, digital positions of the new European Commission, human rights and cybersecurity, among others that we discussed at our previous webinar,  October was marked by the events of the two Titans of the IG field: ICANN and the ITU.

The ICANN51 meeting that took place in Los Angeles, CA, USA, from 12 to 16 October, was attended by over 2000 participants, ‒ many of whom were representatives of the Internet industry and domain name registries and registrars. The highlights started with the address by the US Secretary of Commerce Penny Pritzker (the first appearance of the head of the Cabinet agency at ICANN meetings), in which she re-emphasised that the USA does not want any one entity or nation to replace its role with regard to the IANA function but rather is looking at building a multistakeholder mechanism to which both ICANN and IANA could be accountable. The election of the new leadership of the Government Advisory Committee (GAC) ‒ Thomas Schneider of Switzerland as a Chair, and vice-Chairs from Argentina, Spain, Namibia, Thailand, and Turkey ‒ was seen by many as a signal of a more synchronised, strengthened, and constructive input of governments into the ICANN process.

The IANA transition process was in the spotlight, as expected. It seems crystallised that this transition process will go hand-in-hand with the broader ICANN accountability process. The cross-community working group (CWG) consisting of three communities directly affected by the transition of the main IANA functions ‒ ccTLD community related to the root zone, Regional Internet Registries (RIR) affected by the distribution of IP numbers, and the IETF and IAB related to protocol numbers ‒ is waiting for proposals from each community, and aims to come up with the first joint proposal for further public discussion by January 2015. September 2015 as the initially suggested deadline for the completion of the IANA transition might appear to be tight, since the final proposal has to reach the US government by early summer, and still needs to go through the ICANN Board before that; the extension of the whole process for another two years ‒ an option already mentioned by the US government at the beginning of the process ‒ might be possible.

To support the IANA transition process at the critical moment with the as wide discussions as possible, the location of the ICANN52 meeting in February 2015 has been moved to Singapore instead of Morocco as initially planned (also due to possible restrictions on travel due to the Ebola outbreak). Morocco is, however, still on the list of future hosts, but after Ecuador in June and Dublin in the autumn of 2015.

The ITU Plenipotentiary meeting took place in Busan, Korea, from 20 October to 7 November. The Plenipot is one of the main ITU events at which the election of the new leadership takes place, as well as the (re)consideration of the ITU mandate and strategic plans. As expected, the newly elected Secretary General is the former Deputy Secretary-General Houlin Zhao of China, with 152 votes from the 152 delegates, although he was also the only candidate. Malcolm Johnson of the United Kingdom, former Director of the Standardization Bureau, was elected as Deputy Secretary General of the ITU. He has been replaced in the Telecommunication Standardization Bureau (TSB) by Chasesub Lee from Republic of Korea, while the Directors of the Radiocommunication Bureau (François Rancy from France) and the Development Bureau (Brahima Sanou from Burkina Faso) have been re-elected for another term.

The main items of relevance for IG were discussions about Internet-related matters ‒ the work on several existing ITU resolutions related to the Internet, and possible initiatives for additional resolutions. After the discussions moved from the plenary to ad-hoc groups and back, the finally approved acts did not bring substantial changes to the existing resolutions in this field, primarily:

Besides, Resolution 146 related to the periodic review and revision of the International Telecommunications Regulations (ITRs) now specifies that the revision of the ITRs should be carried out every eight years, and instructs that the review process should start in 2017. The revision will be considered by the Expert Group which will inform the next Plenipot in 2018; this means there won’t automatically be a WCIT meeting in 2020.

The ITU meeting also discussed the openness of its working procedures and documents for non-members, i.e., for other stakeholders. Detailed updates on the main developments of the ITU Plenipot are available on the blog of an already famous IG social reporter Samantha Dickinson (twitter: @sgdickinson).

Besides this dance of the Titans, several other IG developments were notable in October. In Hungary, the government’s decision to introduce Internet taxation raised concerns and brought thousands of citizens to the streets; after several days of protests and strong reactions from the country’s European partners, the plan has been withdrawn, although some activists still have concerns that the plan will be re-introduced in a different form. The leaks of the chapter of the currently negotiated Trans-Pacific Partnership related to copyright, digital rights management, and liability have caused reactions from civil society groups that the US-based content industry is (again) pushing strongly for strict global IPR protection; the plans may confront existing national legislations in this area, such as in Canada which is known for its innovative approach.

The NETmundial Initiative has been re-launched through the webinar, as a follow-up to the August inauguration at WEF in Switzerland. While it will be further supported by ICANN, WEF, and Brazil’s CGI.br, the involvement of ICANN may become less visible judging from the speech of its CEO Fadi Chehadé at the ICANN51 meeting in which he said that he will be reducing his involvement in wider Internet governance developments in order to focus more on the burning ICANN issues.

November brings several important IG-related events. The IETF91 meeting in Hawaii (9‒14 November) discussed DNSSec, IPv6 and other standards and protocols related issues, but also focused on finding its own recommendations for the transition of the IANA function related to protocols. The Cross-community Working Group on the IANA transition will meet on 19 and 20 November in Frankfurt, Germany. The UN CSTD intersessional meeting taking place in Geneva 26‒28 November will discuss digital development, focusing also on the Report on Implementation of WSIS as an input to the 10th annual follow up from WSIS ‒ a High-Level Meeting of the UN General Assembly in New York in December 2015.

The Geneva Internet Conference will be held 18‒19 November, with a pre-event on 17 November marked by the address of the ICANN CEO Fadi Chehadé. The conference promises interactive discussions with innovative formats and integrated remote participation. Topics of the conference include:

The conference will also look into lessons learned from other multistakeholder processes and from national levels like Switzerland, legal framework, jurisdiction, and enforcement in IG, inclusion in digital policy, e-participation and capacity development, transparency in IG policy processes, drafting of IG policy documents, and funding, accountability and trust in IG.

We will reflect on these developments in more detail during our next Geneva Briefing on Internet Governance which will take place on 2 December at 13:00 hrs (CET). For more information and to apply, please follow this link.

The video recording of the webinar is available here: 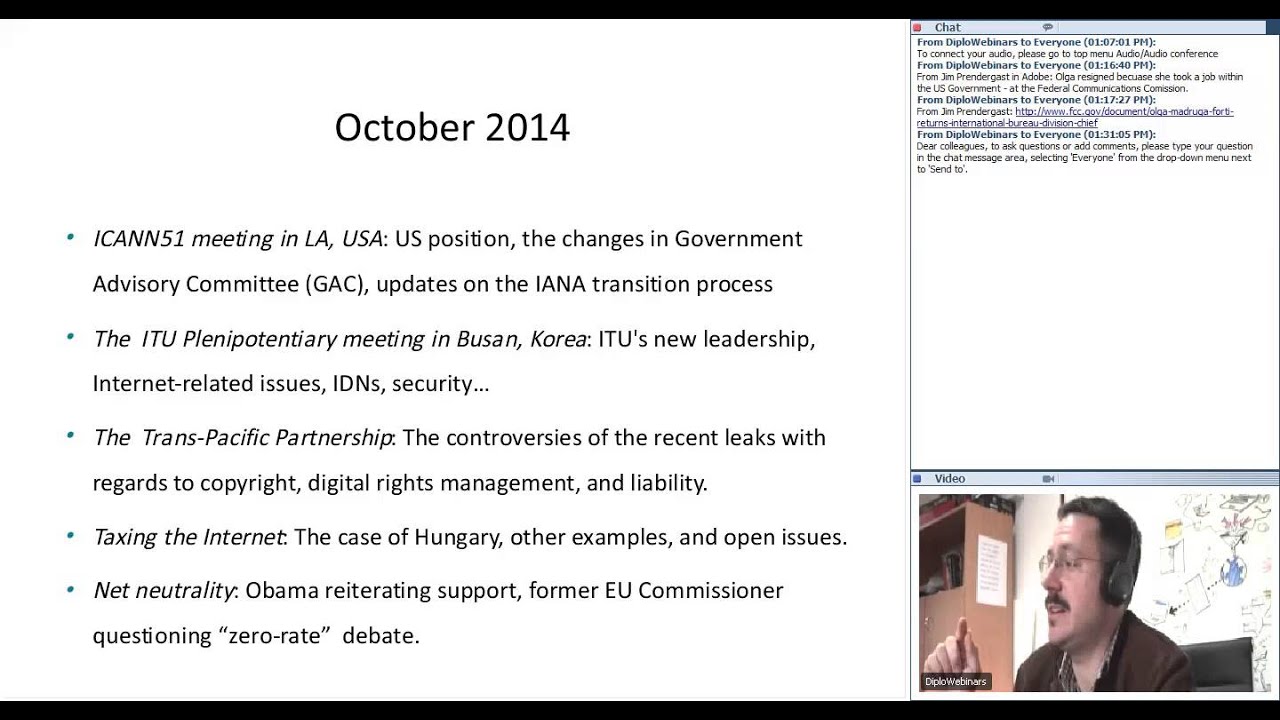 Donations in BitcoinDesigning the new IG building
Scroll to top