Day 1 of the 2013 IGF in Bali started early with an orientation session kicking off at 8am (yes, you read that right!). Despite the less-than-suitable seating arrangement which didn’t do much for interaction, the plenary opening session:

was well attended, providing participants with an initial mapping of the next few days.

It gave them a history of the IGF, a summary of its mandate, and an outline of the challenges it faces in the future. It even included some tips on how to make the most of the proceedings as well as positioning the various stakeholders and their interests in Internet governance (IG). 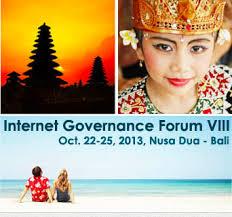 Because the space is so big, the number of attendees seemed relatively smaller than recent years, although the organisers informally reported a record attendance/participation with more than 2000 people from 109 countries registered.

The main session today – Building Bridges – focused on the role of governments in the IGF and the multistakeholder model. This high-level discussion included the UK’s r Ed Vaizey, Minister for Culture, Communications and Creative Industries;  Jari Arkko, Chair of the Internet Engineering Task Force (IETF),and US ambassador Daniel Sepulveda, Deputy Assistant Secretary of State. It was very interactive with lots of interventions from the floor, many centering on the issue of trust in governments and whether governments (even democratic ones) eavesdrop on citizens and/or control the flow of content on the Internet. Brazil, a strong supporter of the IGF, took the position that operationalising the role of governments in IG doesn’t contradict the multistakeholder model. The US mentioned that it uses surveillance, as any other country might do, though all should respect some values.

Capacity building received lots of mentions but the impression the Diplo team came away with was that it is being used as a bumper sticker – it might be easy to say but given that there isn’t a real general understanding of capacity building and how it is struggling in times of ever shrinking financial resources, the realisation that it is far more than training and bringing a few people to the IGF has yet to dawn on many. Capacity building is a policy ‘fig leaf’ – people refer to it when there is nothing else to say.

A very good session – Is it time for the Internet spring in the Arab Region? How can the Arab region deal with the post-hype phase (after all the Twitter and Facebook revolutions)? – highlighted the need for a down-to-earth and gradual approach to capacity building. One good example is the HIVOS capacity building initiatives in IG and human rights.

The talk in corridors focused on the next steps in the Brazil/ICANN initiatives. It seems that except for general ideas and principles, there is a very little understanding about how these initiatives should be developed. More concrete ideas will be outlined over the next few days.

The new Assistant Secretary-General of the UN Thomas Gass, who spoke yesterday at the high-level meeting, met with Multistakeholder Advisory Group (MAG) members to exchange views about the future of the IGF. The members expressed the belief that the UN will finally make a move towards appointing a Special Advisor to the UN SG and the Executive Coordinator of the IGF, help with coordination, and assist MAG to work on improvements to the IGF towards WSIS+10.

A number of workshops ran in parallel, many of which had multistakeholder in their title (15 of the 100 or so scheduled sessions at this year’s IGF).

How to use Social Media effectively in a time efficient way

It IS diplomacy, stupid!
Scroll to top