You are here: Home1 / Help us to build a new Internet governance building and classify IG is...

My problems with classifications date back to the time when I learned that a whale is not a fish and a tomato is not a vegetable. On tomatoes I got a bad mark for not following the scientific classification, but preserved my credibility with my aunts and other great cooks in my life. Fortunately, my stomach ruled my brain when I realised that I knew more cooks than scientists!

Later on in 1997, when I started teaching ICT policy, classifications reappeared in my life. I had to develop a course outline and help students with an overall orientation of what was going on in the new field of ICT policy (later on Internet governance). At that time, the quick fix was to develop a curriculum around five baskets: infrastructure and standardization, legal, economic, development, and sociocultural.

Back in 2004, when IG emerged on the diplomatic agenda (World Summit on Information Society), I was invited to the ITU’s workshop on IG. It was a good moment for scientific research on my ‘quick fix’ from 1997. I got carried away (nothing new there!) and developed a taxonomy of Internet governance. In an attempt to make scientific what was not, I put in a reasonable effort. I analysed feedback from our students on the five-baskets methodology that I’d been using since 1997. Did it make sense to them? In addition, I tried to find measurable characteristics of different issues, including their interplay (Excel from 2004).

Fortunately for me, at the ITU workshop, Richard Hill torpedoed my taxonomy as something that could not be used in social sciences. I decided to leave taxonomy to the biologists and let them turn a tomato into a fruit. IG is too messy to be put in scientifically rigid order, let alone attach a taxonomy.

While taxonomy was replaced by the less ambitious term classification, most background research remains useful in trying to make some sense and order in the messy field of IG. Most IG issues are wicked policy issues with complex causation. One solution could easily trigger numerous interrelated consequences. IG issues easily escape strict classification. 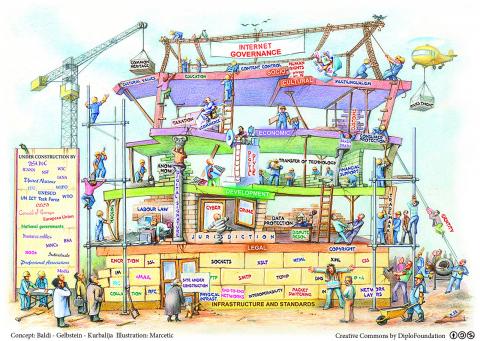 The need for awareness building and explanations made us design the IG building in autumn 2004. This has become part of IG’s visual identity. Food might have lost, but art won against science!

During our courses and conference, it has become clear that there are many IG classifications. For the technical community, IG is about Internet names and numbers and ICANN-related issues. Security people complain that cybersecurity does not get a separate floor in our IG building.

Language is – as usual – a good indicator. The use of ‘e-’, ‘virtual’, ‘cyber’, or ‘digital’ implies certain way of framing and classifying IG. We tend to use ‘e-’ for commerce, ‘cyber’ for crime and war, ‘digital’ for development divides, and ‘virtual’ for Internet space. Usage patterns by different professional cultures started emerging. In everyday language, the choice of prefix might be casual but, in Internet politics, the use of prefixes has begun to show specific meaning and relevance in the way IG is framed and classified.

As with trying to explain to cooks that a tomato is a fruit, it was also difficult to converge various professions around one IG classification.

In such a complex situation, the optimal way was to leave it to our students and researchers to judge whether Diplo’s classification worked. It was a sort of early and unintentional crowd-sourcing. More than 2000 diplomats and other professionals have attended Diplo’s courses. The classification has sustained test of time and has triggered discussion about the next IG classification. Should we call it 2.0?

In addition, we get back to science by using data-mining for textual transcripts from the IGF. So far, discussion shows that the IG is shifting from traditional IG-issues (ICANN-related issues) towards issues around the use of the Internet (privacy, data protection). This trend has been accelerated by the Snowden revelations.

The five floors in our IG building (infrastructure and standardization, legal, economic, development, and sociocultural) may be extended to include two new ones: cybersecurity and human rights. The new IG building will also have two elevators moving core IG values and principles between different floors.

Discussion has been heated on the issue of whether the building should remain ‘under construction’ or take a more definite shape and look.

Let us know your thoughts. What do you think the new IG building should look like?

Governance of Internet governance: towards a plateau of productivityOnline Reputation Management for Governments: in the national interest or out...
Scroll to top