This week, the Global Cyberspace Conference takes place in The Hague. In March, UNESCO hosted a conference on CONNECTing the Dots in Digital Space. The NETmundial Initiative had a meeting in Stanford recently. In early May, the Freedom Online Conference will take place in Ulan Bator (for dates and a list of events see the 2015 timeline).

In the Internet field, prefix-switching (e-/net/cyber/digital) does not usually change the meaning of the word or phrase. The Hague conference could have been called the Digital Space Conference; NETmundial could easily be CYBERmundial. Although these events have different prefixes, they deal with the same set of issues defined by the UN Commission on Science and Technology for Development as ‘international public policy issues pertaining to the Internet’. They address all or some of 40+ issues that can be classified in seven baskets, as illustrated in Diplo’s ‘IG Building Under Construction’. 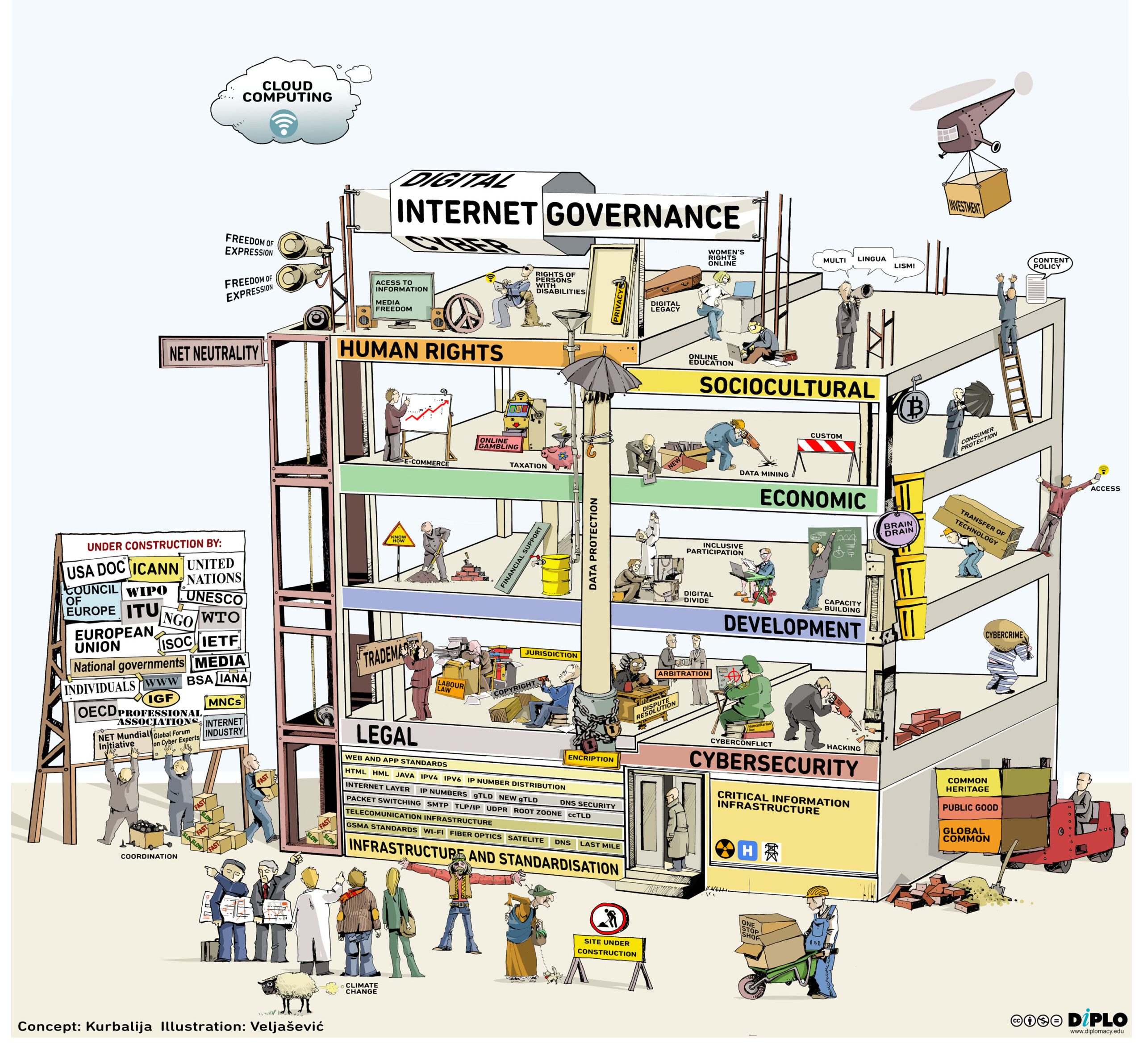 WHY DO PREFIXES MATTER, IF THEY CAN BE USED INTERCHANGEABLY?

First, subtle trends in the use and implications of prefixes have started to emerge. ‘E-’ is used typically for commerce, ‘cyber’ for security and crime, and ‘digital’ for development divides, to name a few. These trends are confirmed by a recent DiploFoundation study analysing nine years of Internet Governance Forum (IGF) transcripts. For example, the study shows a clear trend for the use of ‘cyber’ in discussion on security-related issues.

This process is not surprising. Each policy field tends to develop its own vocabulary, and to frame discussion in certain ways. However, there is a potential risk if the entire Internet policy field comes to be framed through one lens, such as security. For example, although the EU has the Digital Agenda  as its core Internet-related document, the EU Council introduced the concept of cyber-diplomacy. One would have expected digital diplomacy to be a more appropriate name for a foreign affairs representation of the EU Digital Agenda.

In the USA one can identify a wide range of prefixes. The e-Diplomacy unit of the US State Department manages its Digital Diplomacy (use of the Internet in diplomatic activities) and runs, for example, a virtual embassy to Iran. On the national level there is a cybersecurity strategy. A similar ‘prefix salad’ can be found in many other countries worldwide.

The second reason prefixes matter is that different prefixes could create confusion for governments, companies and organisations that have to deal with Internet public policy issues. Different prefixes may convey subtle – and perhaps incorrect – implications about who should cover different issues. During a recent lecture tour in Asia, I realised how difficult is for governments to decide how to deal with these ‘differences’. Who should be in charge of the various issues? Should it be the ministry for communication (digital) or security (cyber) or human rights (online) or…?

For small countries with limited resources, this is becoming a real problem. In a way, by creating more possibilities to participate (more events and more modes of participation), we risk of creating a ‘paradox of inclusion’ (more events, but fewer possibilities for small states to participate actively in most of them). The same challenge of managing the cyber/net/virtual/e- avalanche of events faces companies and the non-governmental sector.

Third, this process of covering similar issues under different titles may increase the difficulty of overcoming policy silos. Policy silos create sub-optimal coverage of multidisciplinary issues such as Internet governance. For example, one cannot effectively address cybersecurity without taking into consideration questions of privacy and freedom of expression, or business interests. Describing similar processes using different prefixes (cyber, digital, net,…) can accentuate the existing gap, making it even more complicated to bridge the policy silos.

WHAT CAN BE DONE?

One has to be realistic in attempts to make policy-making rational. In spite of all efforts, policy-making is rarely optimal. It will always have an element of irrationality, reflecting our imperfection as a society. Security people will meet in their own circles, while human rights, technical communities, and others will tend to stay in their own spaces. We have to accept this reality, but we should not cease our efforts to have multidisciplinary coverage of issues. In many cases we will fail, but the efforts should be made. A few practical steps:

In essence, all of these prefixes (cyber, digital, net,..) refer to the same thing – the Internet. While the process of differentiating meanings and claiming terminology is a natural one, we should be aware that we are creating differences, rather than naming differences which already exist.

The etymology of cyber goes back to the Ancient Greek meaning of ‘governing’. Cyber came into use in our time via Norbert Weiner’s book Cybernetics, dealing with information-driven governance. In 1984, William Gibson coined the word cyberspace in the science fiction novel Neuromancer. The growth of the use of the prefix cyber followed the growth of the Internet. In the late 1990s, almost anything related to the Internet was cyber: cyber community, cyber law, cyber sex, cybercrime, cyber culture, cyber… You named anything on the Internet and you had cyber. In the early 2000s, cyber gradually disappeared from wide use, remaining alive principally in security terminology. One of the reasons is that cyber was used in 2001 to name the Council of Europe Cybercrime Convention. It is still the only international treaty in the field of Internet security. Today we have, for example, the USA’s Cyberspace Strategy, the ITU’s Global Cybersecurity Agenda; NATO’s cyber defence policy, and Estonia’s Cyber Defence Center of Excellence.

E– is the abbreviation for ‘electronic’. It got its first and most important use through e-commerce, as description of early commercialisation of the Internet. In the EU’s Lisbon Agenda (2000), e- was the most frequently used prefix. E– was also the main prefix in the declarations of the World Summit on the Information Society (WSIS, Geneva 2003 and Tunis 2005). The WSIS follow-up implementation is centred on action lines including e-government, e-business, e-learning, e-health, e-employment, e-agriculture, and e-science. Nonetheless, e– is not as present as it used to be. Even the EU has abandoned e-  recently, trying, most likely, to distance itself from the failure of the EU’s Lisbon Agenda.

Today, the EU has a Digital Agenda for Europe. Digital refers to ‘1’ and ‘0’ – two digits which are the basis of whole Internet world. Ultimately, all software and programmes start with them. In the past, digital was used mainly in development circles to represent the digital divide. During the last few years, digital has started conquering Internet linguistic space. In addition to the EU, Great Britain now has digital diplomacy.

The prefix Net almost disappeared after initial popularity, in particular, in Germany (Netzpolitik). It re-emerged with the growing importance of net neutrality discussion and last year with NETmundial in Sao Paolo (April 2014). Future of prefix Relevance of prefix Net will depend on the success of the N. a few years ago after Net was popular in early 2000s

Virtual relates to the intangible nature of the Internet. Virtual introduces the ambiguity of being both intangible and, potentially, non-existent. Virtual reality could be both an intangible reality (something that cannot be touched), and a reality that does not exist (false reality). Academics and Internet pioneers used virtual to highlight the novelty of the Internet, and the emergence of ‘a brave new world’. Virtual, because of its ambiguous meaning, rarely appears in policy language and international documents.

You can find more information in the article ‘Emerging Language of Internet Diplomacy’. Please let us know if you would like to receive updates.

Dr Jovan Kurbalija is the director of DiploFoundtion and Head of the Geneva Internet Platform. You can contact him at jovank@diplomacy.edu

Searching for a European model for net neutrality