You are here: Home1 / Establishing a strong online presence through the use of social media:...

Establishing a strong online presence through the use of social media: E-diplomacy in practice 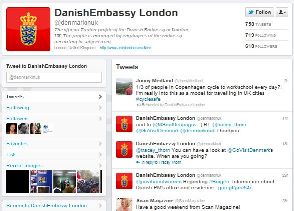 Being involved in an embassy’s use of social media is no mean feat. It’s where two previously distant worlds of traditional public diplomacy and social media engagement meet, and where diplomacy has had to reconsider some of the ways it had of doing things in the light of the social media revolution.

First Secretary Karen Melchior has worked long enough at the Embassy to witness many developments, including the birth of the embassy’s Twitter account, and a more established presence on Facebook. She has an even longer personal history on social media, and has completed an academic study on the use of social media by Foreign Services.

We asked Karen a few questions…

When I arrived at the Embassy we already had a presence on Facebook, but it was not very organised. As part of a Public Diplomacy project concerning the Danish activities in Afghanistan, we made a specific Facebook page concerning this area. We transformed our Facebook persona from a profile into a page and integrated the use of our Facebook page more consistently in our overall communication.

Even though I myself was on Twitter, I did not want to take the initiative to get the Embassy onto the platform because it need more commitment than from just one person at the Embassy. It needs to be a project that the Embassy as a whole or at least a number of people feels an ownership of.

As part of Social Media Week in London in 2010, our colleagues at the Dutch Embassy held a digital breakfast about embassies and foreign ministries’ use of social media. My colleague Peter Krause from our press department participated and returned enthusiastic about getting the Embassy on Twitter. Twitter was then made part of our Communication strategy, and you can now follow @DenmarkinUK.

Do you feel your presence on social media has helped you in your work as a diplomat?

I find social media has added an extra dimension to my work, giving me an opening to the outside world – both for interacting and listening. Social media have put me in touch with journalists in a way that my regular work wouldn’t and also allows me to engage directly with organisations or fellow audience members at public events. My social media profile has become an extension of myself online, and just like my e-mail address, is a way of communicating.

Twitter is often the first place where I find out about new things on the FCO or Downing Street websites. Some of my colleagues use RSS-feeds instead. I have also used social media to follow what NGOs and civil society were thinking and doing concerning climate change in the run-up to COP15 in Copenhagen in 2009.

I feel that it is necessary to try to keep on top of the news in order to be able to prepare answers or just to keep you informed of what is happening. Engaging with journalists is useful in order to make sure that the journalists know who you are and how they can contact you in case they should want to write a story about your country. The Embassy has also been contacted by journalists on Twitter with questions about a news story concerning Denmark before I had read about it elsewhere. We replied to the journalist both on Twitter and by e-mail.

At the Embassy, I can think of two occasions where Twitter has been very useful for me in a very direct way. The first was during the Libya conference in London, where I received the list of participating ministers through a tweet from @foreignoffice long before I received an email containing the same information. A participants list which our minister had been asking for a number of times during the briefing she was being given ahead of attending the conference. So all members of the delegation were very pleased that we were able to read and hand her the participants list before going to the Conference.

The second was when a story about Danish regulation of sale of fortified foods broke on the front page of the Guardian. I first discovered this through Twitter and so did my colleagues in Brussels. Thereby we were forewarned, and could prepare material about the facts of the regulation and the particular case and get that posted on the relevant Department’s homepage. We could also reply to the people posting on Twitter about it and engage with them directly. The people got a reply to their worries about Danish regulation, and felt that the Embassy was responsive. Many were surprised – in a positive way – to get a reply from us. This worked very well and got a good response with many retweets of the message we had posted on the department’s website in Denmark and our own website.

The Marmite story had all the ingredients to work well on social media, as it is a product that most Brits have grown up with and famously either love or hate. News of the story spread quickly through tweets and retweets relating to the Guardian story. It also spread within a day from the original Guardian story to nearly all British newspapers (The Telegraph, Metro, the Daily Mail, The Daily Mirror), and also some TV stations (SkyNews and BBC). Day two after the original article, The Sun, one of UK’s largest tabloid papers, came by the embassy with a big red bus handing out Marmite and interviewed the Ambassador, who explained, ‘I have tried Marmite – but I’m more of a fine-cut English marmalade man.’ A number of blogs (among others: Jonworth, Jacob Christensen, Head of Legal, BoingBoing, Nectorama, Gawker, TheRegister and PeriscopePost) wrote about it was well, and there was also some international coverage in EuroNews, CNN and Huffington Post.

In July, we even did a follow up on our website, informing people that they can bring Marmite with them to Denmark.

How do you integrate social media into your day? Is it easy or challenging to find the time?

I have a computer that is outside the firewall of the Embassy on which I have installed Chrome/Tweetdeck that I use to follow a number of my Twitter-lists, and both my personal and the embassy’s Twitter account. I also use this computer for searches on the Internet, so I go on to it quite often and while I am there I check is there is any news on Twitter.

I also have a text-message service connected to my Twitter account, so I receive a text message whenever @foreignoffice tweets something. Often it is news about new statements made by the British Government concerning foreign policy, and I use this news to keep myself, and colleagues, up to date.

Sometimes when trying to get a longer report written social media can become a distraction, a way of procrastinating when stuck with a piece of work requiring more concentration. However when busy, it is not difficult to find five minutes at the end or beginning of the day to reply to interactions that have come up or share news and events that have been going.

I’ve set up an RSS-feed for a Google alert on ‘Denmark’ and ‘Danish’ and this digs up lots of stories, some of which are not relevant but many are important things I otherwise would not have discovered. These I then tweet about when I have time. This is work that is not directly related to my policy work and could be taken over by the press department, but since I enjoy it I will keep sharing with my or the Embassy’s followers.

Lastly, how did you get started on social media?

Out of curiosity, I tried to get involved privately with new forms of social media to see what it was like. I have – now unused profiles – on MySpace and SecondLife and profiles on YouTube as of 24 April 2007, Facebook since June 2007 and on Twitter since October 2008.

Facebook I joined mainly for private use, but professional use was a large part of why I joined YouTube and Twitter. I first joined YouTube as part of an effort to help spread a viral campaign the Danish Ministry of Foreign Affairs was running to encourage people to have a travel insurance before travelling outside of Europe.

I started thinking of using social media more professionally after I wrote a Master’s thesis on Foreign Services’ use of social media, while I was studying a joint master of Public Administration and Communication at CELSA and ENA in France. I made a comparison between the UK’s Foreign and Commonwealth Office, France’s Quai d’Orsay and my own Danish Ministry of Foreign Affairs.

The thesis was finished during the first few months of my posting to London, and it seemed natural to continue to follow the work done by the people I had studied and connected with on social media.

Furthermore, the Internet and social media are a big element of the way the media works in the UK, so it was natural to engage with the British and the Danish public through these media.

eDiplomacy in a Balkanised Internet

Transparency and atavistic instincts: “To see and not be seen”