You are here: Home1 / Canute, Plato, Theuth and Twitter 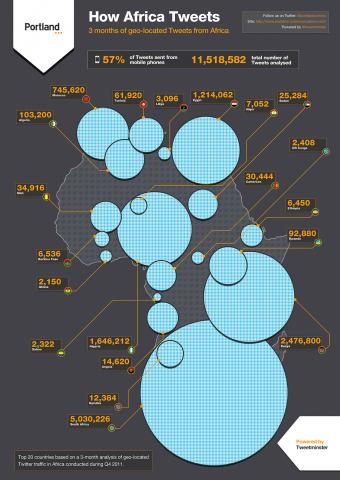 This analysis  by Portland Communications and the platform Tweetminster gathered data about Africa’s use of Twitter. The unsurprising details, such that the continent’s richest country, South Africa, is by far its most prodigious producer of tweets, are less significant than the overall trend illustrated by the mapping. Twitter is as useful and important for active users on the least e-connected continent as elsewhere. Usage patterns of any platform tend to adapt to  local circumstances. A companion survey of 500 of Africa’s most active Twitter users found that the vast majority of those users — roughly 80 percent — use the service primarily for communicating with friends. But 68 percent of those polled said they also use Twitter to monitor the news, an interesting finding in a context where media are often highly restricted.  The US-based  platform dominates local alternatives in most  territories with the notable exception of China. But the most significant overall trend is the exponential growth in adoption of  this simple, to many baffling, tool, where anyone can  make short announcements about  anything to a world audience. Twitter has spawned a sub-economy, of tools to make use easier – such as Hootsuite or Tweetdeck – and many others to help understand what it all means – such as free tools like Tweetreach, Klout and a galaxy of subscription services such as Radian 6. And I am only quoting those tools that I have personally used. David Higgersons Social Media Advent calendar has a great round up of useful tools.

I am hesitant to enter a dialogue that starts with Plato and the great God Theuth but in this context  I want to comment on the exchange between Jovan Kurbalija and Aldo Moretti on Twitter. Part of me is fascinated by the story that Jovan tells of how he uses twitter and the way that it is becoming integrated into his everyday routine. Part of me is puzzled that there should still be debate about the utility of Twitter, and that it should still be subject of mockery when its global adoption is rising like the tide and many diplomats and MFA are active on the space (see #ediplomacy #digitaldiplomacy).

The mockery of Twitter as trivial misses the point, in my opinion. Jovan mentions tweets that say, “I just left my home” and adds ” (who cares?)” The answer is, of course, the people in that person’s network. I think neither author gets under the skin of Twitter. It can be used to broadcast, but it is first and foremost a social media. Examples range from the dramatic to the banal: from the brave, Egyptian, dissident blogger in the time of Mubarak who tweeted precisely, ‘I just left home’ and repeated his progress through the day (he was talking to the people who feared and cared what happened to him) to the myriad of less dramatic examples where daily – hourly – updates serve a social purpose: families, work colleagues, lovers, travellers all use the medium simply to keep in touch. This openness and accessibility is of course why so many are worried about Twitter’s recent moves towards country level blocking. And its social genes are why organisations – including MFA – who don’t allocate resources to engaging a community fail in online social spaces. It is also where we find the latest expression of the fuzzy thinking  which, in his later blog, Aldo celebrates as one of our essential survival skills as a species.

There is something very powerful about age in this debate. The division between digital natives and migrants can be – and has been – overplayed. But there is more than a grain of truth in the assertion that people who have grown up using digital media take it for granted as an integral part of their daily life. That is a different starting point from those of us who grew up in the pre-Internet era of fixed-line phones and broadcast media monopolies. That doesn’t mean older people can’t become fluent in the new languages and integrated culturally, and indeed change the culture as we join in numbers. But we are startled and disbelieving as a result of the pace and scale of changes, and the sheer innovation of something like a broadcast status message – and who on earth would have known what that meant in the 20th Century? 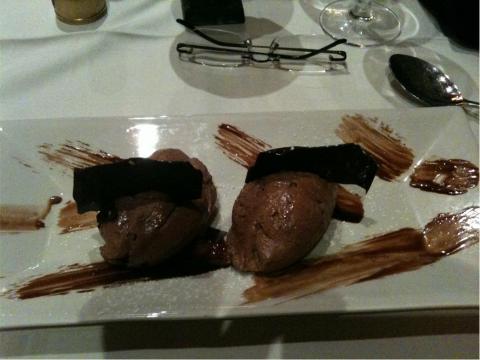 But it doesn’t take much reflection to understand why so many are taking to Twitter and other social media like ducks to water. We evolved, from before Teuth and his ilk, in small groupings, hamlets and communities. We are used to phatic and social communication, reassuring us of presence, contact and caring. So why not tweet a picture of a glistening chocolate mousse from a Brussels restaurant? People will know where I am, and tease me in the way that people tease me in the pub. And I know at least one other person – a manager in a large UN agency – who also tweets her puddings! We also spread a lot of news about how technology supports and challenges professionals in development and diplomacy but does it matter if we also stay human?

The forward march of e-diplomacy paused…?