Legend has it that in the 13th century Dominican friar Albertus Magnus built an artificial ‘brazen head’ that could talk and answer any question asked. According to story, his student, philosopher Thomas Aquinas, eventually smashed the head for ‘talking too much’. Centuries after this medieval escapade, artificial intelligence (AI) ventured into the world of science fiction, Hollywood movies, and eventually, computer science where it positioned itself front and centre.

The hype surrounding AI is nowhere near over. ‘The next big thing’ is in fact increasingly finding its way onto the agenda of governments and international and regional organisations.

AI, an umbrella term used to refer to machine learning, computational neuroscience, and deep learning is becoming part of our daily reality. Take for instance smart assistants such as ‘Alexa’,’ Siri’, and ‘Cortana’ that help us set reminders, give us directions how to get to a destination (perhaps in an AI-powered driverless car), play music, and from time to time, narrate romantic stories.

Practical applications of AI are endless and include a wide range of sectors including: healthcare, security, finance, and military. As this emerging technology climbs the national and international policy ladder worldwide, some countries are also vying for AI dominance. In fact, today we often talk about the race for AI and who will get to sit on the AI throne.

At present, 6% of countries have developed national strategies

According to our comparison of national AI strategies, a total of 14 countries have published official AI strategies while media announcements and official documents (e.g. white papers) indicate that another 20 countries including Finland, Mexico, Russia, Egypt, and Tunisia are following suit.

In their respective documents, governments outline their objectives for development and implementation and the ways of mitigating AI’s potential negative impact on employment, societal inequalities, and the wellbeing of society.

To this end, the Chinese strategy published in 2017, sets out three fundamental goals:
(a) reach a level of AI development that is comparable with globally advanced levels by 2020;

(b) achieve major breakthroughs in basic theories of AI by 2025; and

(c) be a world leader in AI theories, technologies, and applications by 2030

Leadership also features in the German strategy that seeks to secure ‘Artificial intelligence made in Germany’ as a ‘globally recognized quality mark’. 11 of the official national AI strategies explicitly cite leadership aspirations.

Economic prosperity resulting from advances in AI is also an objective in many of the official strategies. South Korea highlights that intelligent information technology (IT) should generate a revenue amounting to KRW 460 trillion (~ €340 billion) by 2030, while China estimates that 26% of its GDP by that same year will be derived from AI-related activities. In a similar fashion, India’s strategy ‘#AIforall’ expects AI to contribute to an increase in its annual growth rate by 1.3% by 2035. In order to generate economic gains, countries will have to invest in AI. To this end, some strategies intend to allocate important financial resources to AI projects with budgets estimated in millions, and even billions of dollars.

Data as the engine behind AI

The high relevance of data for the advancement of AI is reflected in nearly all official strategies. Its availability is seen as the driving force behind AI development.

While some countries acknowledge the availability of large quantities of quality data sets, others, including Denmark and Japan, highlight the need for access to, and digitalisation of, publicly held data so as to enhance AI-related capacities. To this end, the Villani Report, which served as the basis for France’s AI strategy, calls for the development of new means of sharing, governing, and producing data. It also emphasises that a ‘firm stance on data transfer outside the European Union’ has to be ensured given that data is an issue of sovereignty.

One of the recurring themes in national AI strategies and reports is AI research and development given that it appears in 12 documents. Lithuania and Canada both emphasise the importance of collaboration, incentives for investment, as well as talent retention/development, which among other things, entails reskilling and is often discussed on the subject of future of work. It is noteworthy that official strategies tend to underline that technologies, including AI, will not increase unemployment but instead will provoke shifts in labour. 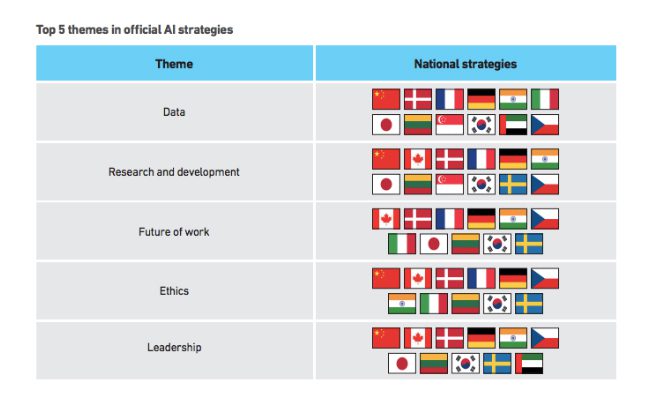 AI is not regarded as an objective or as an end in itself but rather as a tool at the service of the public and society that can be used to pursue economic, commercial, and public interests. For AI to play this role, issues pertaining to ethics such as the responsible use of AI, and respect for privacy, transparency, and equality have to be considered. Aside from featuring in 11 out of 14 documents, ethics and values are also being addressed by world leaders, with the latest initiative coming from Canada and France who announced the formation of an International Panel on Artificial Intelligence.

Given that AI is a fast-moving field with much international participation, it remains to be seen what country will release an AI strategy and transform a legend into reality next .

*The article was originally published in Issue 39 – April of the Digital Watch newsletter under the title ‘Dissecting AI strategies’. Access the newsletter.