You are here: Home1 / Internet governance in April 2019

These and many other developments, trends, and regional updates were covered during April’s just-in-time briefing on Internet governance – our monthly appointment on the last Tuesday of every month – which took place on 30 April 2019. They were also summarised in the Internet Governance Barometer for April and in Issue 39 of the Geneva Internet Platform (GIP) Digital Watch newsletter.

Maciel and Radunović spoke about major Internet governance events from which GIP) rapporteurs provided just-in-time reporting in April 2019. Maciel expounded on the UNCTAD eCommerce Week 2019 held between 1-5 April in Geneva. Radunović then spoke about the second Western Balkan Digital Summit held during 4-5 April 2019 in Belgrade, and the World Summit on the Information Society (WSIS) Forum 2019 held between 8-12 April in Geneva. 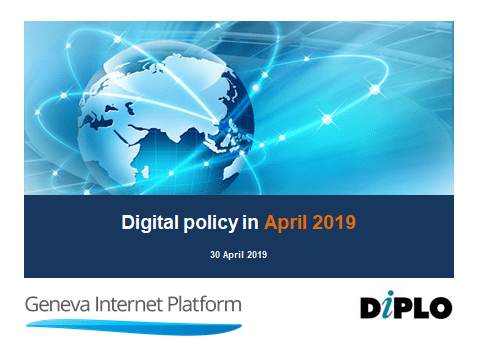 Radunović began by highlighting developments related to cybersecurity. G7 foreign ministers adopted the ‘Dinard Declaration on the Cyber Norm Initiative’. Russia’s State Duma (lower chamber) adopted a law on the stable operation of Runet, which should enable the country to disconnect its Internet traffic from foreign servers if needed. Kamberi then explained China’s considerations regarding the shutting down of cryptocurrency mining operations. Next, Radunović touched upon Wikileaks founder Julian Assange’s political asylum being revoked by the Ecuadorian Embassy, followed by Assange’s arrest by the UK police, and Ecuador reporting a high level of cyber-attacks on its institutions following his arrest. Radunović also mentioned the ongoing controversy over Huawei’s 5G equipment as the US Department of State warned it might stop sharing intelligence with countries that use Huawei equipment, including the UK. Höne zoomed in on two developments concerning artificial intelligence (AI), including AI researchers signing a letter calling on Amazon to stop selling facial-recognition technology to law enforcement agencies and the EU High-Level Expert Group presenting ethics guidelines for trustworthy AI.

The next Internet governance briefing is on 28 May. Registrations are open.

Radunović then briefly enumerated the upcoming events in May, which included the fifth SEEDIG Annual Meeting and the 22nd Session of the Commission on Science and Technology for  Development (CSTD). He also gave an overview of the upcoming activities of the GIP and DiploFoundation, which included publishing the April 2019 newsletter and the start of a new online course titled ‘Artificial Intelligence: Technology, Governance, and Policy Frameworks’.

Regulation of data flows in international discussions and negotiations, possible use of blockchain to avoid censorship, and the link between transparency and AI were among topics discussed during the interactive session of the briefing.

Grace Mutung’u gave updates from Africa. The African Continental Free Trade Agreement (AfCFTA) has come into force. Jumia, the largest e-commerce platform in Africa, has been listed in the New York Stock Exchange (NYSE) through an initial public offering (IPO). The Executive Director of the Collaboration on International ICT Policy for East and Southern Africa (CIPESA), Wairagala Wakabi, was detained at the Julius Nyerere International Airport in Tanzania.

Updates from the Middle East and North Africa were provided by Noha Fathy. Banned social messaging apps are reportedly hinder emergency relief in Iran. The Dubai Future Council on Artificial Intelligence held its first meeting in April 2019 and started discussions on how AI can be used to ‘enhance Dubai’s status as a future global city’.

Andre Edwards provided updates from the Caribbean region. A blockchain project focused on streamlining the agriculture value chain has been launched in Haiti. Orange’s French Caribbean subsea cable, which connects French Guiana with Martinique and Guadeloupe, was upgraded.

Multistakeholderism and Internet governance in Cameroon

Network Neutrality in law – a step forwards or a step backwards? 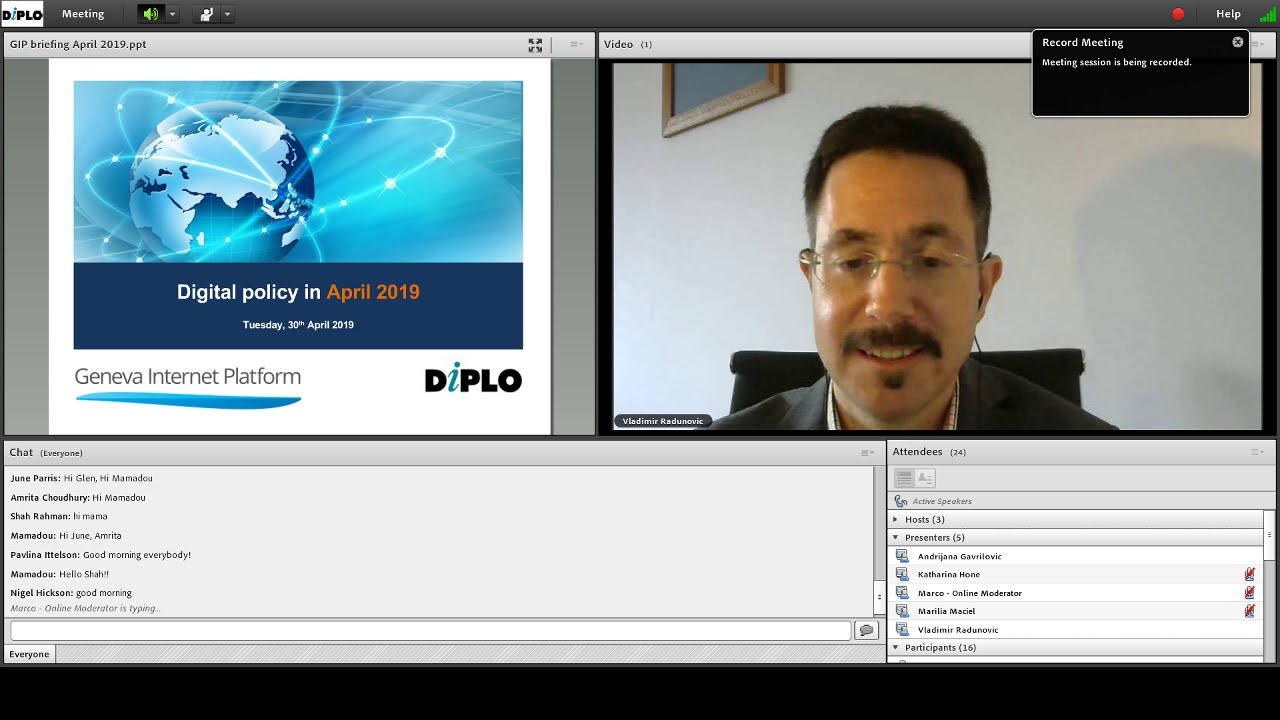