Scholarships covering 20%–50% of the Postgraduate Diploma fee are available for applicants from small and developing states. The programme starts on 3 February 2020. The application deadline is 15 October 2019.

Negotiation Skills is a practical, interactive course that equips participants with the skills to successfully prepare, undertake, and conclude negotiations in formal and informal settings with government and non-government actors. The course starts on 14 October – we are still accepting applications for the last few places. Read more and register now to reserve your place. Partial scholarships are available.

Diplo and the GIP at the WTO Public Forum

DiploFoundation will take part at the World Trade Organization (WTO) Public Forum, the organisation’s largest annual outreach event, which will take place on 8-11 October at the WTO headquarters in Geneva. The event provides a platform for participants to discuss the latest developments in world trade and to propose ways of enhancing the multilateral trading system.

In partnership with the International Trade Centre (ITC), Diplo is co-organising the session ‘Trade norms on access to the source code: What is the impact on trade in services and development?’, which will take place on 10 October, from 10:15 to 11:45 CEST. The session will discuss the legal and economic arguments advanced in favour of and against prohibitions on requiring the transfer of or access to the source code.

The GIP Digital Watch observatory and Diplo will provide just-in-time reporting from selected sessions which relate to e-commerce and other digital trade-related issues. 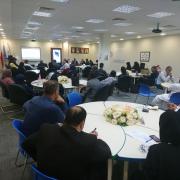 From 1-3 October, the ITU is promoting the workshop ‘Strengthening capacities in international Internet governance‘, held in Manama, Kingdom of Bahrain. The event aims at strengthening the capacities of the ITU membership in the field of Internet governance, and will cover issues such as infrastructure, cybersecurity, privacy, and challenges related to the digital economy and financial services. The workshop is being organised in partnership with DiploFoundation, ICANN, the Internet Society, and RIPE NCC.

Kurbalija voted one of 100 most influental #digitalshapers2019

For the fourth year in a row, Swiss magazine Bilanz’s eleven-member jury selected the 100 most important heads of Switzerland, who are at the forefront of digitisation. Jovan Kurbalija, head of DiploFoundation and the Geneva Internet Platform was voted one of the 100 most influential Digital Shapers in 2019 in the category ‘politicians and administrators’.

Digital (and) Diplomacy: How to deal with digital aspects of foreign policy

On 18 September, DiploFoundation’s Digital (and) Diplomacy conference brought together experienced diplomats and other key stakeholders to discuss how diplomacy and foreign policy can be coupled with digital issues that shape our world. This is particularly relevant since technology pervades every level in our societies, thus demanding diplomats to step up in their abilities to use these modern-world tools for their advantage, and defend them from the pitfalls that come with them. *See the event summary in our blog post below.

The Club suisse de la presse helf a debate on ‘How to defuse war talks‘ on 20 September at the Château de Penthes in Geneva. Jovan Kurbalija, head of DiploFoundation and the Geneva Internet Platform took part in the discussions.

The Common Good in the Digital Age

Jovan Kurbalija, head of DiploFoundation and the Geneva Internet Platform took part in the event ‘Common Good in the Digital Age‘ which took place on 26-28 September 2019 at the Vatican. Pope Francis addressed a Vatican conference that inclued government envoys, the tech sector, academia, philosophers, physicists and ethicists on the ethical challenges of technological progress.

What’s been happening in Diplo’s blogosphere

In [WebDebate summary] Science Diplomacy: Preparing the next generation, Andrijana Gavrilovic and Marga Gual Soler sum up the May WebDebate, which discussed science diplomacy, focusing on the question of preparing the future generation of diplomats for this emerging field.

Digital (and) Diplomacy: Co-operation, transparency, smart approaches, and awareness sums up the event which took place in Geneva on 18 September, where diplomats and practitioners discussed the way forward for digital diplomacy and how to overcome key challenges, during last week’s international conference in Geneva.

In Accelerating action: SDGs need ‘digital steroids’ Jovan Kurbalija discusses the 2030 Agenda for Sustainable Development. The most recent Report on Sustainable Development Goals (SDGs) estimates that 6% of the world’s population is likely to continue living in extreme poverty by 2030, and least developing countries will most likely fail to meet their industrialisation targets. Kurbalija explains how we can turn Agenda 2030’s ‘digital shyness’ into an opportunity.

Ambassador Asoke Mukerji shares ‘An ambassador’s personal reflections on his time at the UN (2013-2015)’ in his blog post.