You are here: Home1 / Wikipedia and the battle of words over political events in Egypt

Wikipedia and the battle of words over political events in Egypt

Wikipedia is the most popular encyclopedia of our time. It influences public understanding of events and it is a relevant platform for public diplomacy. This blog post addresses the way Wikipedia coverage has reflected unfolding political developments in Egypt.

Political disputes usually take place in multiple and simultaneous battlefields. One of them is the semantic universe: the winning narrative about a controversial fact tends to be predominant in public perceptions and in History books. Therefore, it is understandable that actors invest resources on crafting particular expressions or on making them resound in the collective conscience.

In Egypt, the deposition of 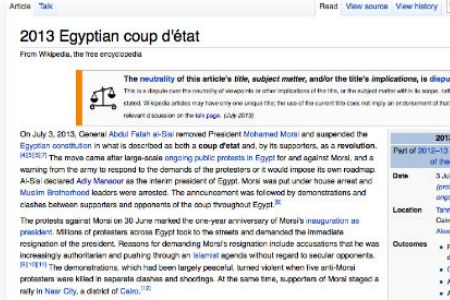 Mohamed Morsi triggered an ongoing debate on how to label it: was it a coup d’état or a revolution?  The importance of this question goes beyond national politics. It affects the international legitimacy of the current government and it also impacts on concrete policies, such as international aid. The United States is one of the countries that conditions aid to the existence of a democratically elected government. If Washington acknowledged the existence of a coup, this would entail suspending the transference of 1,5 billion to Egypt, which would probably lead to a loss of US influence with the group that seized power. The White House and many other governments did not take a clear stand on the issue, but if a dominant narrative emerges, they might be compelled to do it. Politicians usually focus their attention on traditional media to identify these emerging trends on public discourse. Interestingly, this time some analysts have also called attention to the lively debate that is taking place in the backstage of Wikipedia about the title of the article “2013 Egyptian coup d’état”.

The attention raised to the discussion in Wikipedia is not misplaced. The platform is currently the seventh most visited website worldwide and is only behind search engines, like Google and Yahoo, or social networks, such as Twitter, YouTube and Facebook. Many professionals use Wikipedia as a first source of information when they begin their researches on a given topic. In addition to that, unlike traditional media articles, which become old and fade from our memories in a few days, Wikipedia articles are easily retrievable and may have a long lasting repercussion, as they are indexed in the most popular encyclopedia of our time.

The outcome of the discussion in Wikipedia may have a concrete impact on public discussions, but it is still unclear to many how Wikipedia works. Three core policies determine the way a topic should be treated in Wikipedia, establishing the framework for the platform: verifiability, no original research (NOR) and neutral point of view (NPOV). The first two are deeply related. Wikipedia is not a platform to share innovative ideas or the outcome of original thought. Its articles should be a summary of the known and relevant information about a given topic, supported by verifiable sources such as books, published academic works or media news.

The Neutral Point of View policy means that all opinions about a particular topic should be fairly represented. An article about a contentious topic should not reveal where the authors stand on the matter. The discussion of rival opinions should contain no sympathy or bias, but if there is a wide disparity in acceptance of different points of view, they should be covered proportionally. Some discussants in Wikipedia argue that the use of the word “coup” in the title of the article about recent events in Egypt is neutral and factual because sources, such as The Oxford English Dictionary, describe a “coup d’état” as an “illegal seizure of power from a government” and most legal analysts agree that this description matches the events that unfolded in Egypt. Other members of the Wikipedia community affirmed, also with good arguments, that the title of the article violates NPOV because there is no predominant view on the matter. The opinions of Egyptian citizens, the main international media and governments are split.

Wikipedia discussants will have no problem in finding sources to support whatever view they affiliate themselves to. Traditional media channels, for instance, have made their preferences for the word “coup” or “revolution” very clear from the start. Some of the media has allegedly even omitted facts that would not support their preferred view. Governments, on the other hand, have avoided taking a clear position. They know the potential political and diplomatic pitfalls of trying to pre-assess the legitimacy of a government, and the long historical debate between the Tobar and Estrada doctrines did not take them very far. Moreover, the geopolitical importance of Egypt cannot be overlooked. For all that, the words used by particular governments or media channels to refer to recent political events in Egypt are important, but they do not necessarily point the way for achieving neutrality in Wikipedia.

At least two conclusions can be drawn from this case. The first is that many of the issues that split opinions in society will also be controversial in platforms such as Wikipedia. However, the enforcement of clear policies like NPOV and the existence of constant peer review create incentives to produce balanced Wikipedia articles. This kind of pressure seems to be missing in traditional media. Wikipedia is, therefore, filling a gap and being increasingly regarded as a relevant source of information. The second conclusion is that, in spite of its growing importance and astonishing popularity, this platform has been practically absent in assessments of the public opinion and in strategies for public diplomacy. Paying attention and contributing to Wikipedia could be particularly relevant for diplomats, professionals who use words as key instruments to produce international reality and who always need to look at a picture from all sides.