You are here: Home1 / What is a diplomatic cable?

What is a diplomatic cable?

A diplomatic cable is a diplomatic message. The etymology goes back to the mid-nineteenth century when the first diplomatic messages were sent via telegraph. Telegraphs were connected by telegraph cables and the focus on telegraph as the technical device was very often on laying and managing cables (e.g. the epic attempt to lay trans-Atlantic Cable in 1860s). Since then telecommunication has evolved with diplomats using radio links, fax and today, the Internet. But, in spite of changes in technology, the term ‘cable’ remains part of diplomatic lingo. The recent WikiLeaks has quickly been dubbed ‘CableGate’.

One possible reason why the term ‘cable’ remains entrenched in diplomatic language and professional ’sub-consciousness’ is the high importance of cables for the world at the end of nineteenth and beginning of the twentieth century. Big powers were rushing to lay as many cables as possible in order to create their own global telecommunication infrastructure. 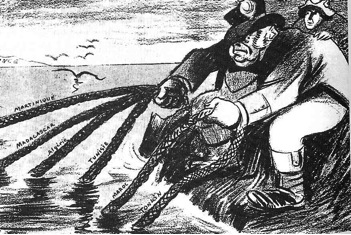 Global policy, including colonial expansion, depended on the availability of telegraph-based communication facilities. Initially, until the 1880s, the ‘cable rush’ was mainly inspired by commercial and telecommunication needs. Britain developed a considerable lead during this period, having established a starting advantage that would be difficult for many countries to catch up to in the forthcoming decades.

Crises at the turn of the century, especially the Fashoda crisis between Britain and France, as well as the Boer War, highlighted the geo-strategic importance of the network of telegraph cables. The rush for laying cables thus began. France, Germany, and the United States tried to develop their own networks and counterbalance the British predominance in this field.

Table 1. A survey of the global distribution of telegraph cables between 1892 and 1923.

Daniel R. Headrick, The Invisible Weapon: Telecommunications and International Politics 1851-1945 (Oxford University Press: 1991), p. 94 and 197.; Note:  the data for Germany for 1892 and 1908 includes The Netherlands; the data for “Others” for 1923 includes German cables, whose extent could not be determined

The geo-strategic importance of the telegraph network also led towards the establishment of one of the first international organisations: the International Telecommunication Union.

A few cables influenced the history of the early twentieth century. The Ems cable/telegram led to the re-unification of Germany. Some authors, such as Stephn Kern, argue that misuse of the telegraph contributed to the start of the First World War: ‘This telegraphic exchange at the highest level dramatised the spectacular failure of diplomacy, to which telegraphy contributed with crossed messages, delays, sudden surprises, and unpredictable timing.’ The Zimmerman Telegram from 1916 brought the USA into the First World War and influenced the outcome of that war.

After CableGate, it is likely that the use of the term ‘cable’ will be extended for many more years to come.

On the way how high cost of telegraph (cable messages) in 19th century influenced diplomatic writing style see: ‘Twitter and the first US Diplomatic Cable – Where’s the Connection?’

Second Committee approves draft resolution on ICT for developmentThe more confidential documents you have, the less confidential they become...
Scroll to top