You are here: Home1 / What can Twitter diplomacy learn from Ancient Greek diplomacy?

What can Twitter diplomacy learn from Ancient Greek diplomacy?

In short, full transparency and openness is not an optimal environment for successful diplomacy aimed at solving complex problems through convergence and compromise.

Let me develop the argument:

Ancient Greece is often called the cradle of modern civilization. Greek philosophy is as valid today as it was more than 20 centuries ago, in its attempts to explain our existence. Theatre, geometry, and astronomy, to name a few subjects, originated in ancient Greece.

However, in one field – diplomacy – ancient Greece is not considered a golden era. Professor Raymond Cohen, a leading historian of diplomacy, says ‘The practice of Greek diplomacy was quite rudimentary’ … ‘Compared with Persian cosmopolitanism, Greek diplomacy was provincial and unpolished’. [1] Diplomacy in ancient Greece was not as developed as the earlier diplomatic practices in ancient Egypt and Persia, or later diplomacy in the Byzantine Empire, and eventually the Italian city states. 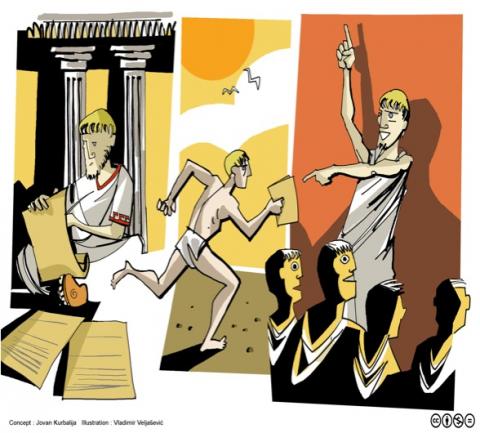 In the March webinar of our series on the evolution of technology and diplomacy, we discussed the diplomacy of ancient Greece, and what we can learn from it. The strong focus on openness and transparency is one of the parallels between ancient Greece and our era. Ancient Greek diplomacy was one of the most open diplomacies ever practiced. Envoys addressed public gatherings of citizens of the receiving states. Like today’s Twitter diplomacy, diplomats spoke to the public. Paradoxically, at least at first glance, this openness created one of the major weaknesses of ancient Greek diplomacy. Facing the foreign public, envoys were advocating more than negotiating. Their task was to persuade the wide population of the receiving state, not to negotiate compromise with the opposite side. Today, Internet public diplomacy also focuses on advocacy.  However, major diplomatic breakthroughs are usually achieved via ‘translucent diplomacy’ (the public is aware of the negotiations and their results, but it does not follow the process as it unfolds).

For example, the Myanmar transition, one of the main diplomatic breakthroughs in 2012, was achieved mainly through traditional and ‘translucent diplomacy’. Currently, the negotiators for Kosovo and Serbia are spending long days (and nights) in Brussels negotiating a new deal for Kosovo. The public is informed about negotiations taking place and the results of each round. But cameras and Tweets are not in the negotiating room. If they were, negotiations on such emotionally charged issues would turn into public posturing on national pride for the public back home in Belgrade and Pristina. Negotiators would not aim at reaching convergence with the opposite side across the table, but on investing in their individual political careers and preparing for the next elections.

Today’s discussion on e-diplomacy and its demands for full transparency must consider the primary purpose of diplomacy: achieving peaceful solutions for conflicts through compromise. Often, it is not possible to achieve compromise while negotiating in the public eye.

Modern diplomacy cannot, and should not, tolerate secret diplomacy. However, some form of ‘translucent’ diplomacy is often more effective in reaching compromise solutions than today’s often choreographed public diplomacy, increasingly conducted online. This is at least one historical lesson that we can learn from ancient Greek diplomacy.

In April, we will search for new lessons, this time from the Roman era and Byzantine diplomacy.

The power of data

Truth in the social mediasphere – lessons from #Kony2012