You are here: Home1 / What aspects of the Internet can be considered global public resources...

Report from the second panel of the conference The Internet as a Global Public Resource (29‒30 April 2015), which tackled the question: What aspects of the Internet can be considered global public resources? The panel speakers were Mr Louis Pouzin, computer communications pioneer and one of the fathers of the Internet; Dr Alex Sceberras Trigona, Special Envoy of the Prime Minister of Malta; and Professor Joe Cannataci, Head, Department of Information Policy and Governance, University of Malta, and Chair in European Information Policy and Technology Law, University of Groningen.

Not many can recall the historical evolution of the Internet better than one of the fathers of the Internet. Mr Louis Pouzin, inventor of the datagram and the early packet communications network, was the keynote speaker at the conference The Internet as a Global Public Resource, organised by DiploFoundation on 29‒30 April 2015 in Malta. 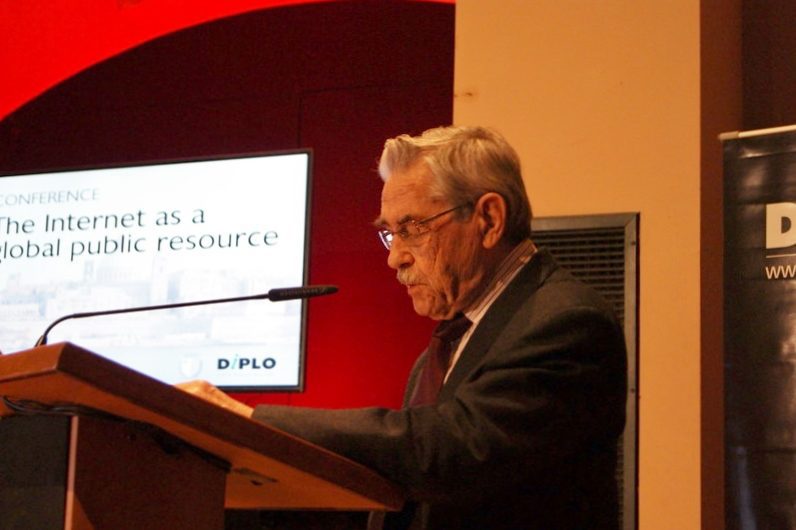 In his keynote speech, Pouzin recalled how the Internet started in the 1980s with the TCP protocol and ARPANET – the first network to implement the protocol suite TCP/IP, and was developed by Vint Cerf and Bob Kahn who invented the fundamental communication protocols of the Internet.

At the time, it was an experiment. No one was thinking about security. Rather, the goal was simply to make the transmission of data work.

There have been improvements to the system, such as increased speed and more Internet protocols. Yet the Internet is the same ‘system’ as the one invented years ago. In some aspects, it is obsolete and needs to be redesigned – a development which has been largely resisted. According to Pouzin, the Internet we know will not last forever.

The same technical system created 40 years ago underwent a major change: it became commercially oriented, and based on a business model in which Internet companies collect personal data in exchange for free services. It is a system on which we have become dependent.

Today, millions of computers and mobile devices connect to the Internet, and rely on the domain name system (DNS), the Internet directory. The domain names architecture is managed by US-based ICANN (Internet Corporation for Assigned Names and Numbers). What was formerly a system of just a few top level domains (TLDs) has recently expanded into a system with hundreds of TLDs.

Pouzin believes that ICANN has become a monopoly, and yet, the naming system does not have to be unique. ‘We have to decide to take back our freedom […] we have to create something else’, he said. One example is Open-Root, a company founded on an idea developed by Pouzin, selling TLDs on ‘open roots’ (i.e., TLDs which are accessed through directories operating independently of ICANN).

With regard to surveillance, Pouzin recalled how the first signs of surveillance activities emerged 10 years ago. Yet, nothing was done to protect the users. He believes that the Internet is serving an industry of spying networks. It is here that encryption becomes very important and unavoidable: while not everything has to be ciphered, having no encryption is like sending postcards where anyone can read the message.

In the face of all these challenges, there is certainly a need for a more critical system:

Pouzin believes that we need a supranational framework for cyberspace. Whether it is a global framework, or a mix of frameworks, remains to be seen.

Dr Alex Sceberras Trigona, Special Envoy to the Prime Minister, is certainly not a newcomer to the discussion. In fact, his intervention on declaring the Internet as a common heritage of mankind, at the World Internet Forum in Kuala Lumpur in June 1997, was one of the earliest known iterations on the subject.

Sceberras Trigona explained that three different legal and political architectural designs can be used to protect the Internet, all of which fall under the umbrella term ‘global public resource’. This term is closer to Elinor Ostrom’s Nobel prize-winning work on common pool resources.  The following three main concepts can be used to declare the Internet:

Recalling the diplomatic journey between 1967 and 1982, and against a backdrop of difficult negotiations in which the newly elected US administration had introduced the interests of multinational private companies in the sea bed and sub-sea bed at a time when Malta was promoting its protection as a common heritage of mankind, Sceberras Trigona proposed the same concept for the Internet, in order first to retain its universality:

‘We have something to refer to now as a legal concept, so it would be rather ‘amateurish’ if we were to carry on a debate ignoring a huge institute of public international law which is there [and which has] been established since 1982, with constant practice.’ Even the non-ratifying USA is practicing it and acquiescing in UNCLOS, so one could therefore say it is not only global treaty law but also global customary international law. Similarly with regards to the Internet, we must move from power to law; from globalisation ‘de facto’ to globalisation ‘de jure’.

The legal concept of common heritage is firmly established and used in many other international treaties: the Outer Space Treaty (1967), the Moon Treaty (1979), the UN Convention on Biological Diversity (1992), and the Antarctica Treaty (1959). UNESCO also has its own legal and administrative track record in protecting the human genome under the 1997 Declaration, and under the 1972 Convention protecting cultural heritage as a common heritage of mankind.

With reference to his intervention in March at UNESCO’s CONNECTing the Dots conference, Sceberras Trigona also referred to the Antarctica Treaty, and the sharp contrast between Antarctica and the Arctic at law and in fact – the latter attracting many overlapping and colliding sovereignty claims. Which was the better model for the Internet – the chaotic Arctic model or the harmonious Antarctic Treaty model, he asked. They are both geographically as well as legally ‘poles apart’.

Both business and government interests sought and demanded that degree of certainty which only came from stable and harmonious international legal regimes to operate efficiently and successfully. From a legal perspective, whether the notions of res nullius (ownerless property) or res communis omnium (belonging to the entire global community) could apply to the Internet in the context of the Internet being an unpatented artefact were moot points. Establishing the Internet as part of the common heritage of mankind would remove a large number of these destabilising factors.

In war or armed conflict situations, besides in peace, the Internet required more protection. Sceberras Trigona asked whether the common heritage concept would solve this or whether amending the Geneva Conventions was sufficient to protect the Internet’s critical infrastructure in the same way as these conventions protected hospitals, ambulances and Red Cross operators during armed conflicts and war.

By analogy with UNCLOS, could its specific norms be transposed mutatis mutandis to the Internet? For example, the confirmation of the seabed as common heritage (article 136, UNCLOS) would be easily transposed. Yet, could the principle of non-appropriation in article 137, barring any claim or exercise of sovereignty as an erga omnes obligation, apply to the Internet? He noted further that in article 137(2), once recovered, minerals may be subject to property rights as a useful model for the public/private mix required for the Internet.

Could the obligation to exploit the seabed area for peaceful purposes under UNCLOS’ article 141 and for equitable non-discriminatory sharing among all under articles 140, 143, 144, 148, and 150, including developing countries, be applied to the peaceful use, conservation and non-discriminatory benefit sharing of the Internet globally?

The WSIS Declaration of Principles (2003) was encouraging in talking of the international management of the Internet, and the 2005 report of Working Group on Internet Governance Report had gone further by identifying critical internet resources which could be usefully analysed whether best governed under each of the three regimes.

Was it common concern, global public goods, or common heritage which best governed the four pillars of the Internet’s critical infrastructure (according to WGIG’s paragraph 13a and 15: the domain name system, the Internet protocols and addresses, the administration of the root server system, and the technical standards). Was there, therefore, a need to have analogous institutions to UNCLOS’s International Seabed Authority and the Hamburg International Tribunal to have common  management, common governance and common adjudication on the Internet?

Therefore, of particular use to the forthcoming research project, Sceberras Trigona concluded, was to analyse the above three different regimes, and how they compared with regards to the various aspects of the Internet, especially its critical infrastructure.

Professor Joe Cannataci, head of the Department of Information Policy and Governance, University of Malta, and chair in European Information Policy and Technology Law at the University of Groningen, said that in analysing the notion of global public good, we should factor in a number of perspectives, including economic and legal, which should be more complementary than they are divisive.

More specifically, citing the Internet protocols and physical networks as examples, Cannataci reflected on aspects which could be afforded protection if one were to declare the Internet as a common heritage.

In this analysis, Cannataci said he could foresee a number of political and legal issues. At the same time, one has to find a balance between the ideal way forward, and the practical way forward.

Referring to surveillance, in practice today, a number of countries and companies are doing whatever they can get away with, simply because the system enables them to do so. Every country has interests; it is the way we carry out such activities that differentiates us from a less civilised approach.

Cannataci believes that we also have to look at the analysis of global public resources from a very practical point of view. Many concepts have been discussed for years, and yet they have not progressed into tangible action. For example, the vision for the Internet as a global public good has been around for many years; the community has long been discussing a treaty for the Internet; the IGF (Internet Governance Forum) is yet another talk show, he posits. In most cases, legal frameworks are resisted by a small number of countries, which believe it is not in their interest to be bound by frameworks.

Yet, we now have a chance of looking at international law growing exponentially and incrementally, rather than through one treaty governing all aspects related to the Internet. It is in this context that the discussion could take place, Cannataci concluded.