You are here: Home1 / The Internet: an exceptional global public resource

Report from the first panel of the conference The Internet as a Global Public Resource (29‒30 April 2015): Official welcome by the Hon. Dr George Vella, Minister for Foreign Affairs of Malta; Introductory statements by Ms Megan Richards, Principal Adviser to the Director General of DG CONNECT, European Commission and Dr Jovan Kurbalija, Director of DiploFoundation, and Head of the Geneva Internet Platform.

‘The Internet, because of its outreach, has become a national, regional, and an international commodity.  Governments, the private sector, and the civil society must work together in their respective roles, to ensure [the] Internet’s sustainability, security, and even its critical contribution to the survival of the human being,’ Foreign Minister the Hon. Dr George Vella said in his official welcome  to the International Conference on the Internet as a Global Public Resource. 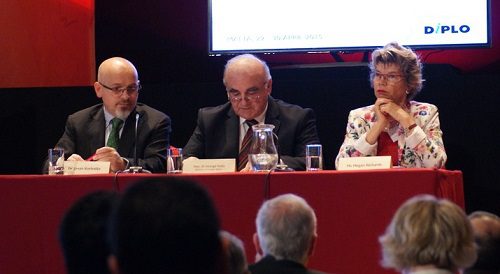 The conference, which took place at the St James Cavalier Centre for Creativity in Valletta, Malta, on 29‒30 April 2015, was organised by DiploFoundation with support from the government of Malta, the World Economic Forum (WEF), and other partner organisations.

Welcoming Louis Pouzin – one of the fathers of the Internet – among the conference delegates, and saluting the names of visionaries who promoted the concept of ‘Noosphere’ (literally, ‘mind-sphere’ or Earth’s mental sheathe), Minister Vella described the Internet as ‘a resource [that] all the stakeholders must respect and utilise diligently for the benefit of our societies, large or small, rich or poor’.

‘The Internet can be considered an exceptional global public resource’, considering also the contribution it has made to bridging the digital divide and to achieving the millennium development goals, he noted. At the same time, cyber-attacks and cybercrime remain a challenge to the security and protection of ICT systems, especially critical information infrastructures.

Referring to local challenges, Minister Vella said that Malta faces a challenge in how to address the highly interdependent digital policy in an integrated manner – a challenge common to many countries. The challenge will be more pronounced when Malta hosts the upcoming Commonwealth Heads of Government Meeting (CHOGM) in November 2015, and takes up the Presidency of the Council of the European Union in 2017.

‘I am therefore of the view that  these broad international initiatives require a cohesive and coherent approach to digital and other related issues of our modern world’, he said.

Ms Megan Richards, Principal Adviser to the Director General of DG CONNECT, European Commission, referred to the history of Malta dating back thousands of years. Because of its location and size, Malta has been at the crossroads of communication and transportation and has had to be outward-looking throughout its long history.

Looking back at the Internet’s short history, Richards said that the Internet has transformed our lives and improved our economies in a short time. Globalisation, transportation, and information and communication technologies have changed the way we live, and even the way we govern. The Westphalian approach no longer applies; we have to look at other ways to manage in a more global world. She suggested that we think about what will happen in 20 years’ time and beyond, and what we would like to see in the future.

Though by no means perfect, she referred to the Internet and its multistakeholder governance model as a useful model in a complex, interconnected world that links different networks and connects many layers, involving players with different roles.

The basic principles for the European view of Internet governance are those mentioned by Ms Neelie Kroes in the Compact for the Internet and which look at  the civic responsibility of users, an open unfragmented Internet, multistakeholder governance, the Internet as a pro-democratic instrument, the architecture of the Internet, confidence of users as a prerequisite, and transparent governance. Similar principles ‒ including openness, freedom, non-discrimination, and respect for human rights ‒ were also adopted by the G8 meeting in Deauville in 2011.

As we look towards an important year of events related to the Internet and its governance, including the WSIS+10 review, the renewal of the IGF mandate, and CHOGM, we also need to think about the impact that these discussions will have on those who are not yet connected. The WSIS+10 review process should focus on development aspects and bridging the global digital divide.

Richards said that the International Conference on the Internet as a Global Public Resource was important for determining whether the Internet could be considered a global public resource, and what the implications would be. The definition of global public good requires universal availability, non-exclusivity, and non-rivalry. Does the Internet meet those criteria? It is theoretically available worldwide, but access is not yet possible for everyone; it is in principle non-excludable, although some countries try to restrict access; and it is certainly non-rivalrous, as indeed in some ways, the more it is used the more data and information is created.

Richards concluded that the conference and the research that will look at the issues and how to address them will be very useful. ‘We look forward to seeing the results’.

Welcoming the speakers and delegates to St James Cavalier Centre for Creativity, Dr Jovan Kurbalija, Director of DiploFoundation, and Head of the Geneva Internet Platform, said that the venue – a magnificent sixteenth-century fort – offered the right interplay between tradition and innovation.

Kurbalija traced the roots of the discussion on the Internet as a global public resource, and the first institutions in Malta to be connected to the Internet. He referred to the work of Joseph Tabone, former executive chairman of the Malta Communications Authority and of the COMNET Foundation for ICT Development, whose foresight drove him to establish an Internet connection for COMNET from MSU – the Management Systems Unit (the progenitor company to MITTS – the Malta Information Technology and Training Services, now MITA – the Malta Information Technology Agency). The Mediterranean Academy for Diplomatic Studies – the institution from which DiploFoundation was born – was also one of the first institutions connected to the Internet.

The discussion on the Internet as a global public resource finds its roots in an intervention made by Dr Alex Sceberras Trigona, Special Envoy to the Prime Minister of Malta and former Minister for Foreign Affairs, at the World Internet Forum in Kuala Lumpur, Malaysia, in June 1997, in which he advocated in favour of applying the legal concept of common heritage of mankind to the Internet.

More recently in 2014, Prof. Klaus Schwab, founder and chief executive of the World Economic Forum, referred to the notion of global public goods during the inauguration of the NETmundial Initiative.

Kurbalija concluded that to take the discussion forward, we now have to discuss which aspects can be considered a global public resource. For example, should the root zone file, the IP numbering system, or the cables that carry the data – to mention a few – be considered global public goods?

More reports from the International Conference on the Internet as a Global Public Resource are available on the conference webpage.

[Briefing #14] Internet governance in April 2015What aspects of the Internet can be considered global public resources?
Scroll to top