You are here: Home1 / Webinar digest: (Un)knowns in digital politics in 2014

Internet governance (IG) developments in 2013 confirmed vividly the old saying that it is difficult to make predictions, especially about the future. Who could have predicted the Snowden revelations that have substantially affected global digital politics? It is a good reminder about the need for humility when referring to the future. This is how Dr Jovan Kurbalija set the stage in last week’s webinar.

Dr Kurbalija started with a reality check of the 2013 predictions made a year ago. The main unforeseen development – influenced by Snowden’s revelations – was the shift of human rights and the Internet to the top of the IG agenda. Yet, apart from a shift in the order they were placed, the main issues predicted in last year’s crystal ball exercise did actually materialise. The Snowden revelations triggered a tectonic shift that altered the relationship among Internet users, governments, and the Internet industry. According to The Guardian, which has access to the Snowden archive, only 1% of the documents have been revealed, with the more controversial information yet to come.

In this context, Dr Kurbalija clustered the predictions for 2014 according to the ‘Ramsfeld classification’ of the ‘known knowns’, ‘known unknowns’, and ‘unknown unknowns’.

What is certain is that various IG processes and events will be taking place this year, some in parallel streams; these events are expected to shape Internet policy in a substantial way. One of the most anticipated events is the Global Multistakeholder Meeting on the Future of Internet Governance, which will take place in São Paulo, Brazil, on 23-24 April. Other events include meetings organised by ICANN, the ITU, UN bodies (UNGA, UN Human Rights Council), the World Economic Forum, and of course, the 9th Internet Governance Forum in Istanbul in September. (Prof. Wolfgang Kleinwachter summarised the main events for 2014 here, while the Council of European National TLD Registries (Centr) has compiled a detailed flowchart of the main events with dates here.)

The ‘known unknowns’ relate to substantive discussion: Will major stakeholders come closer to a zone of possible agreement, especially during the São Paulo meeting? Will they agree on an institutional agreement for policy developments? Will governments support Internet principles, and will the principles require implementation mechanisms? Can the international inviolability or immunity of the root zone – introduced in a recent blog by Dr Kurbalija – solve one of the oldest and hottest issues of IG debates, concerning the relationship between ICANN and the US government, in managing the Internet ‘address book’ (domain names and numbers)?

1. Topping the list are the developments related to the IG architecture, especially on an international level. The hottest issue will be how to achieve the right balance between Internet functionality (run by private sector and non-government actors) and the need for legitimacy (high involvement of governments). The new Internet ecosystem, as it is sometimes labelled, will be at the top of the agenda of the São Paulo meeting and other meetings during 2014.

3. Closely linked to privacy issues are data protection and cloud regulation. Here we can expect two trends: a) the extent to which individuals can ‘trade’ their data (e.g. a more explicit arrangement between the Internet industry and users about ‘buying’ private data) and b) the tendency of countries and regions to retain as much data as possible on servers located within their territories.

4. The 2011 US International Strategy for Cyberspace made it clear that existing international law is applicable to the Internet. Last year, the anchoring of IG into existing law was also one of the reinforced elements in the UNGA draft resolution on the right to privacy in the digital age. The continued anchoring, and a special focus on public and private international law, will remain in focus.

5. Cybersecurity has been a constant focus of digital politics. This year, we can expect more linkages with the main IG debates, including discussions on achieving a balance with human rights issues (e.g. cybersecurity and the protection of privacy).

6. It has been a relatively quiet period for discussions on ICANN’s new gTLDs programme. The spotlight in digital politics has shifted from ICANN to the Snowden revelations. Yet, many of the controversies about the new gTLD have not been resolved. Questions about who will manage sensitive domains like ‘Amazon’ or ‘Islam’ or ‘Christianity’ remain unanswered. The highly symbolic relevance of names and identities leaves very little space for ICANN to find innovative solutions that will result in leaving all those concerned (‘all’ often being a huge number) equally satisfied or even equally unsatisfied.

7. Intellectual Property Rights was another area which stayed in the ‘policy shade’ in 2013. It is a structural issue of digital politics which is likely to re-emerge in 2014.

As the Snowden revelations have shown, we cannot predict ‘unknown unknowns’. Yet, these are likely to influence IG negotiations substantially. This has already happened in the past with the Titanic catastrophe, which directly influenced the adoption of a set of ITU radio regulations. The best way to address ‘unknown unknowns’ is to make the system robust enough to deal with them. We cannot predict earthquakes, but we can prepare to deal with them.

What ‘unknown unknowns’ do you think we can expect for 2014? Post a comment below… Let us monitor these predictions and see what this important year will bring us.

Listen to the webinar recording here: 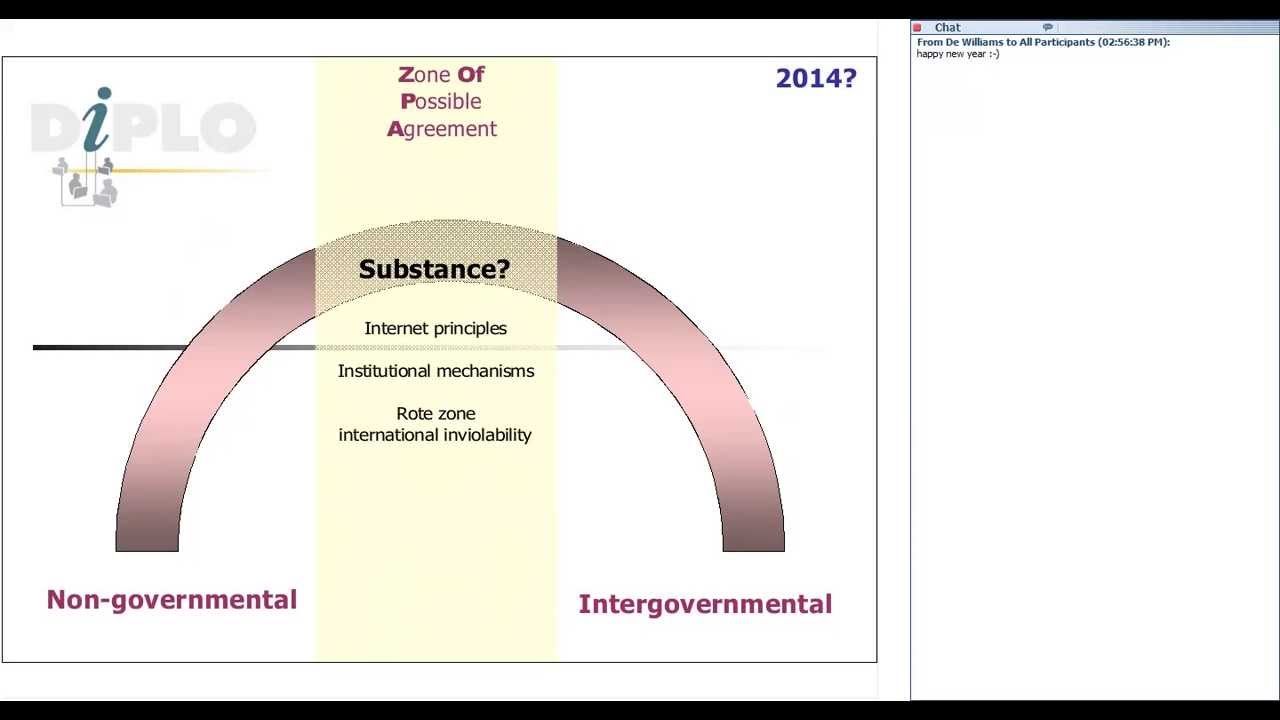 and view the presentation here.

To receive news and announcements about our IG webinars, please subscribe to our IG webinars list. Read more about Diplo’s January IG webinar, Internet governance in 2014: Between change and continuity, here.

‘The poorer the country, the higher the cost’ – webinar host

Hierarchy is here to stayKeeping up with Google
Scroll to top