The 8th IGF in Bali, Indonesia, took place at a delicate time when surveillance and privacy issues were dominating most IG meeting agendas.

The Snowden leaks  led to a strengthening focus: the heavy air of distrust pervading online users has driven major Internet companies to focus on more transparent methods of operation; meanwhile, however, more leaks continue to emerge.

Trust has been undermined, and this has led to a serious crisis, including in Internet governance, explained Dr Jovan Kurbalija during last week’s webinar on the main developments, outcomes, and general atmosphere of IGF 2013. The webinar was the latest in Diplo’s series of monthly IG webinars.

Dr Kurbalija said that there is an urgent need to find a way out of the current situation. Unsurprisingly therefore, surveillance was among the top three issues discussed during workshops and sessions at IGF 2013. The High-Level Leaders’ Meeting, on Day 0, touched on the issue, while the Taking Stock/Emerging Issues closing session focused on Internet surveillance.

In recent weeks, we’ve seen IG issues being tackled in other forums, placing IG in the premier league of global governance, according to Dr Kurbalija. The fact that other players are now discussing issues that fall under the broad IGF umbrella probably led so many workshop organisers to discuss the IG’s institutional framework at this year’s IGF.

The recently announced meeting which Brazil – whose President has been highly critical of the USA’s surveillance operations – and ICANN are co-organising in May 2014, is possibly a way out of the current IG crisis, Dr Kurbalija explained.

Not only can we expect the meeting to tackle Internet surveillance, but also to focus on the IG institutional framework. As ICANN’s CEO Fadi Chehadé stressed during the IGF, ‘It will be a truly multistakeholder meeting, with a multistakeholder steering committee, where Brazil and maybe 3 or 4 other organising countries will be involved, attended by a multistakeholder audience.’

What can we expect in the forthcoming period? 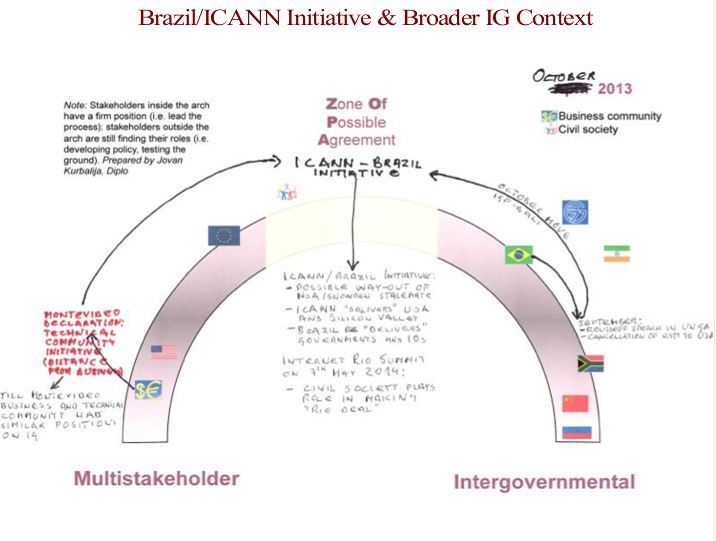 A series of meetings are lined up for 2014 (see ‘high politics’ along the vertical axis in Dr Kurbalija’s IG geometry sketch). These include the WSIS +10 High-Level Event in Sharm el-Sheikh in April, the Brazil/ICANN meeting in May, and the ITU Plenipotentiary Conference in Bhutan in October.

In the broader IG context, Dr Kurbalija explained that the Brazil/ICANN meeting is moving towards a Zone of Possible Agreement– a scenario in which it is possible for players from both sides of the spectrum to find common ground. The spectrum includes players in favour of the multistakeholder model, and those who lean towards an intergovernmental model.

At the same time, it is yet to be seen whether other players, especially governments, will also move towards the common-ground zone. What is certain is that statistics from Diplo’s study on the emerging language of the IGF have revealed that at this IGF governments were less talkative than in the past. Now the big question is whether the Brazil/ICANN meeting will break the deadlock in the current wait-and-see approach which many stakeholders have adopted?

We invite you to listen to a live recording of the webinar: 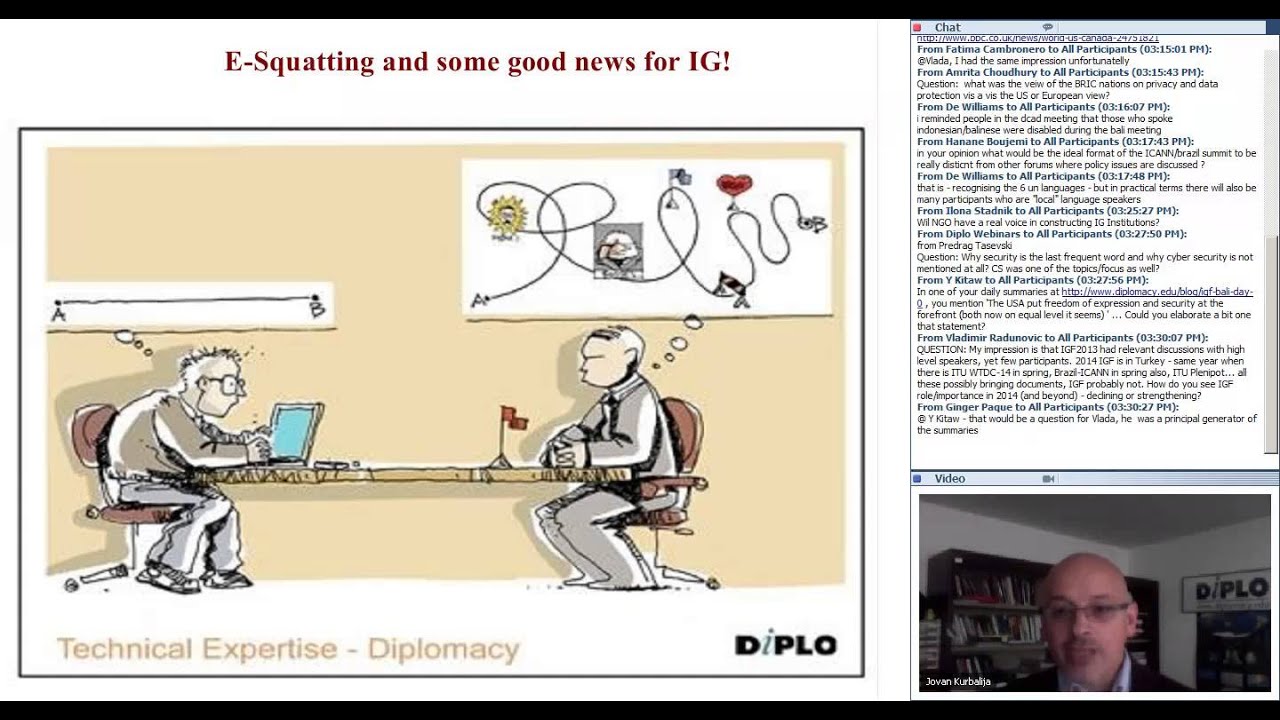 in which Dr Kurbalija also discusses questions and comments by webinar participants, including: Which organisation or forum has come closest to proposing a sustainable model for IG? How many people spoke in languages other than English in IGF 2013 focus sessions? What can be done to encourage government participation at IGF meetings? You can also download the PowerPoint Presentation in PDF format, separately, here. To receive news, announcements and follow-up e-mails regarding our IG webinars, subscribe to our IG webinars group.

The right to be forgotten: from Spain to Luxembourg and beyond

Diplo faculty in the news

Webinar digest: TV broadcasting and the impact of the CNN effect on diploma...
Scroll to top