You are here: Home1 / Webinar digest: Is Brazil leading a new revolution in global digital p...

The September IG webinar was co-organised by DiploFoundation and the Center for Technology and Society of the Getulio Vargas Foundation in Brazil (CTS/FGV). Marília Maciel, from CTS/FGV, and Diego Canabarro,from the Federal University of Rio Grande do Sul, discussed the impact of the Snowden case on Brazil-US relations and on Brazil’s traditional support for the multistakeholder model. They also assessed recently announced measures, such as the creation of a BRICS cable, and of the risks of Internet fragmentation.

The IG webinar started with a discussion on the diplomatic consequences of the Snowden revelations for the bilateral relations between the United States and Brazil. Both speakers agreed that there is a well-established history of good relations, and that the co-operation between the governments and among private actors will continue. The future consequences are still unclear and could translate into a reduction in US soft power in Brazil. On a global level, Internet governance has definitely been brought to the forefront of discussions and is becoming a key variable for explaining policy-making opportunities and risks for countries.

Diego positively evaluated the fact that Brazilian President Dilma Vana Rousseff chose to take the issue to the UN General Assembly, addressing the problem in a straightforward and transparent way, and not bilaterally and behind closed doors. Both agreed that resorting to a multilateral space does not necessarily mean that Brazil will step away from the multistakeholder model the country has traditionally defended. Marília posited that multistakeholderism in Brazil may even be strengthened after the NSA revelations. Rousseff specifically wanted to listen to the Brazilian Internet Steering after the case, reinforcing CGI.br’s political role on national politics. Her speech at the General Assembly has also been largely inspired by the set of principles put forth by CGI.br, which is also meaningful. Moreover, the government has asked the National Congress to urgently examine the text of the Civil Rights Framework for the Internet (Marco Civil), a bill that has been discussed in an open and participatory way online.

Participants raised concerns about the much-announced BRICS cable and the possibility of fragmentation of the Internet. The speakers explained that some measures announced after the NSA are positive, and the BRICS cable is one of them. Together with the creation of more Internet exchange points, it would decentralise Internet traffic. Diego noticed that most actors focused on the harsh words used during Rousseff’s speech, but not so much on the positive proposals she made, such as preserving network neutrality. This would be something very positive for the development of the Internet. On the other hand, Marília pondered that, because countries are under pressure to respond to the monitoring of communications, they may introduce hasty regulation and policies that could lead to disruption or fragmentation of the Internet. In her opinion, multistakeholder dialogue has become more important than ever in order to prevent this trend. She mentioned some shortcomings of Brazil’s plans to legally force companies to store data in Brazil.

The speakers agreed that a global framework to foster privacy of communications is needed. Marília mentioned that there are issues, such as security, that do not find a home in current organisations; therefore, after the Snowden case, we may witness a stronger push to take these topics to existing organisations that are not necessarily appropriate forums. In her opinion, NSA policies show that there are problems in the current global Internet governance regime. Stakeholders should think outside the box and be creative to come up with institutional solutions. She said that the CSTD Working Group on enhanced cooperation should take the opportunity to innovate. 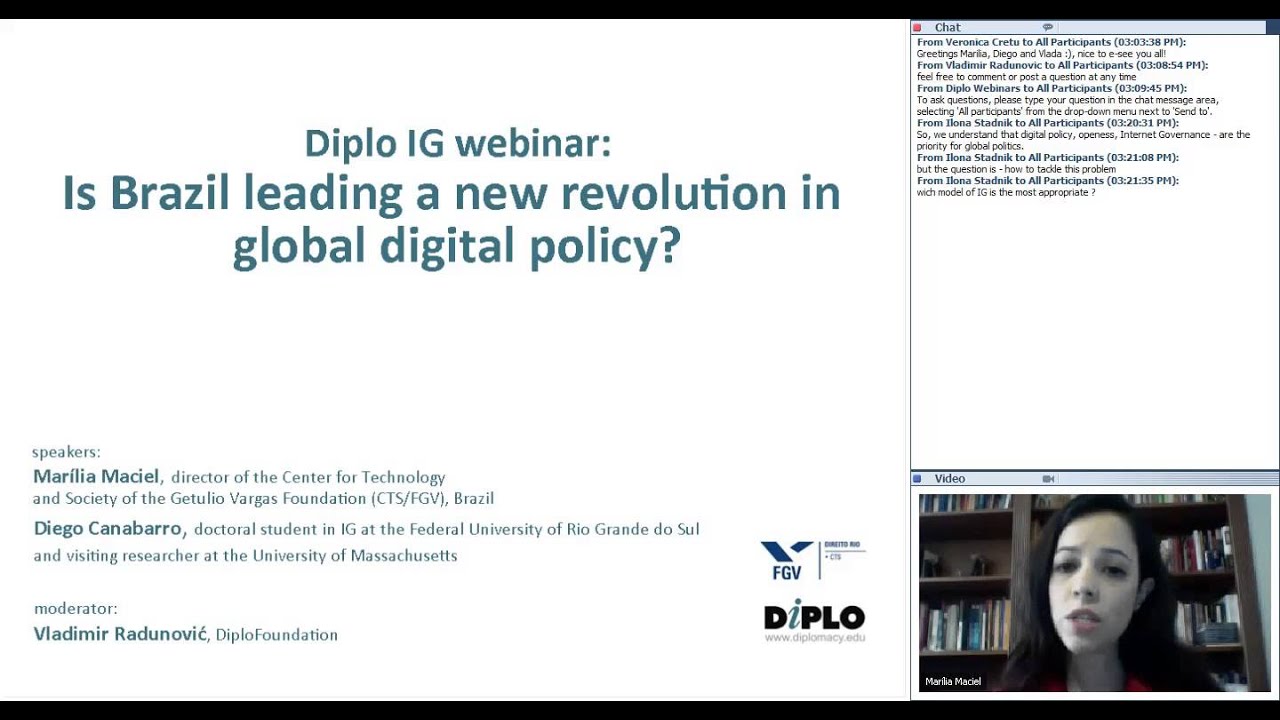 in which Marília Maciel and Diego Canabarro discuss the issues in more detail, including questions and comments by webinar participants.