You are here: Home1 / Social media diplomacy: the rules of engagement

In the early 1800s, John Marshall wrote: “To listen well is as powerful a means of communication and influence as to talk well.” The longest-serving Chief Justice of the US Supreme Court and the father of American Constitutional Law, Marshall didn’t have tools like Twitter and Facebook. In his time, communications technologies were relegated to quills and inkwell, and the First Amendment was only a few years old. Yet, Marshall understood the power of communication and the importance of listening to better communicate.

Today, 200 years after Marshall’s times, listening has become a key element in what we call digital diplomacy. Social media made the point loud and clear to all politicians, policy makers, and diplomats around the world: we need to listen and engage with our publics to be more efficient, transparent, effective, and to better respond to new challenges. Engagement has become a key element in terms of influence and reach.

But what are — loosely adopting a diplomatic term — the rules of engagement? Well, Marshall seems to have them already laid out: listening, communicating, being influential and clear in your message are all important elements to take in to consideration when planning a social media strategy, especially when it comes to diplomacy and foreign policy.

The term ‘engagement’ has been used and abused by presidents, prime ministers, cabinet ministers, ambassadors, and the entire diplomatic infrastructure. However, according to a recent study conducted by Burson-Marsteller, very few world leaders are truly engaging on social media, especially when it comes to their peers.

“Almost half of world leader accounts analyzed don’t follow any of their peers,” reads the study. “A quarter of world leaders and governments follow President Barack Obama and the White House, but @BarackObama and the @WhiteHouse have established mutual Twitter relations with only three other world leaders: Norway’s Jens Stoltenberg, the UK Prime Minister and Russia’s Dmitry Medvedev.”

While at first interconnections between presidents might not be the most relevant element — as the study reveals that only very few do their own tweeting and often tweets are targeted to constituents —  the engagement level is key when it comes to determining how your influent and on point a government’s social media communication plan is in terms of foreign policy priorities and public diplomacy.

“It is not the size of the followership that matters, but the quality of the conversations,” writes Matthias Lüfkens, Digital Practice Leader at Burson-Marsteller and author of the firm’s Twiplomacy study on government relations and Twitter, in a recent essay published by the Canadian International Council.

It’s certainly hard to analyze the quality of a social media conversation or even define exactly what engagement is — or rather, how to measure it.

In social media, engagement quite simply could be described as an ongoing interaction between two or more users who are nurturing an open online conversation. But engagement can counts various levels and layers… And because of that it can be tricky to quantify and relate it to how successful a social media strategy is. Even more so when it comes to digital diplomacy.

Measuring the levels of engagement and influence has attracted many different social media players both within and outside the diplomatic community. In a previous blog post I argued that, while most efforts are marketing-related, it’s key to: (1) understand how to be engaging beyond the elusiveness of online conversations; (2) look at influence measuring tools as a sort of reference, not as exact statistics on our interactions online.

Observing how diplomatic interactions on social media work today and how far governments have gone to establish a presence on tools like Twitter and Facebook, I identified what I called the rules of engagement: two parallel paths to plan and enact an engagement plan on social media. 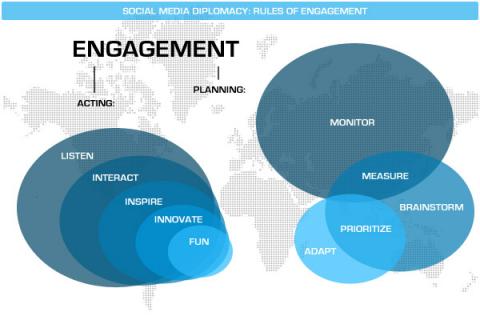 The first path shows five key elements to consider in order to better engage your public — both at home and abroad — and articulate a successful and consistent message on social networks: (1) listen to the world around you, offline and online – (2) interact with all relevant stakeholders and the public in general; (3) inspire others in making your message theirs and thus expanding your reach; (4) be innovative in the message you are broadcasting and in the ways you use social media tools; (5) have fun and be personable as it’s easy to loose the reader’s attention — and followers — when your message becomes boring and doesn’t reflect your personality.

The second — but parallel — path identifies those steps necessary to plan and expand your engagement: (1) monitor your activity and that of your network; (2) use tools like the AFP’s eDiplomacy Hub and Klout to measure the level of engagement and influence; (3) brainstorm and analyze your findings — it’s key in this process to include your staff at all levels as the best ideas might come unexpectedly; (4) prioritize and identifies what message better circulates so that you can empower your social media tools with a deeper engagement level; (5) adapt and embrace new ways to communicate your foreign policy agenda, on social media and beyond.

Adaptation is key in the social media process, as what today we call Twiplomacy has been drastically changing the way governments interact with their citizens and foreign publics alike.

“This is not the first time in history diplomats are challenged to radically change their “protocols” to new realities, to a new culture, to a different society,” Italian Foreign Minister Giulio Terzi — aka, @GiulioTerzi — said at arecent Twiplomacy conference in Turin, Italy. “In fact isn’t this exactly what we do every time we change posts in our career abroad? We adapt. We have been doing this for centuries: each technology-driven revolution shifted the way diplomacy works and communicates, but neither telegraph nor tv broadcasting had ever led diplomacy to such a close, direct and quick interaction with people.”

Do we need diplomats more or less than in the past?