You are here: Home1 / Ready for the future? Germany’s emerging AI strategy

Last Friday, the German newspaper Die Zeit organised its third Artificial Intelligence (AI) conference. I was born in Germany and have just moved back after a nine-year stint in Great Britain, so I went to get my first direct impression of the country’s relationship to AI and to hear debates about digital politics in general. Much like the experience of the first few days back in the country, the conference was an exercise in encounters that seemed both extremely familiar and strangely different at the same time. While I could intuitively understand the cornerstones of the debate, they also seemed new and odd from the perspective of an outsider. And in between the two, I (re-)discovered the German AI strategy. 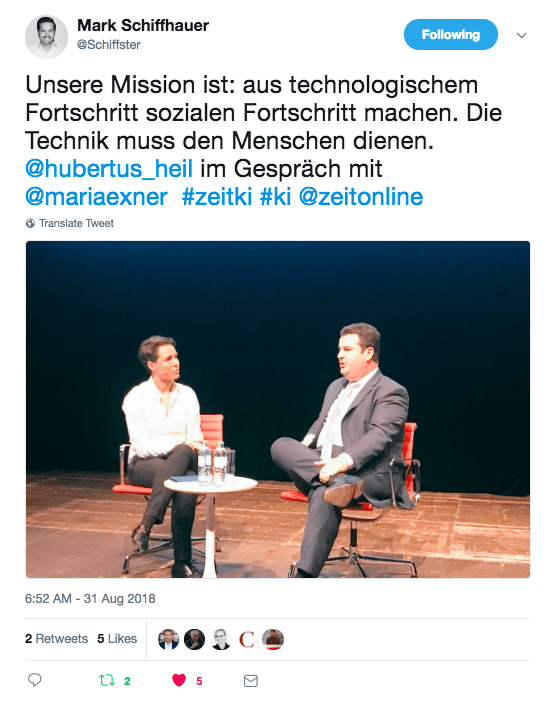 Like a number of other countries, Germany is developing a national AI strategy. A preliminary Eckpunktepapier (white paper) is already available and the full strategy will most likely become public in November and be launched at the Digital Summit in early December. As with most of the other strategies, the German plan, unsurprisingly, aims to put the country in a leading position when it comes to AI, both in terms of research and practical applications in the business and service sectors.

The Eckpunktepapier stresses that Germany is already in a good position to achieve its ambitious goal of becoming a leader in AI. It emphasises that key steps have been taken or are underway (examples include the High-Tech Strategy and the Platform Industrie 4.0).

Yet, the debate on the conference’s main stage and in its corridors was dominated by the argument that Germany needs to catch up. There was a palpable sense, not to say fear, that Germany is either behind or in danger of falling behind (den Anschluss verlieren) other countries, especially in terms of AI innovation and concrete business applications.

When I describe this particular attitude to friends abroad, I’m usually greeted by a lack of understanding. The German self-perception and how others perceive the country from the outside when it comes to leadership in technology and innovation are often at odds. To encounter self-critique so prominently in the debate struck me as typically German. 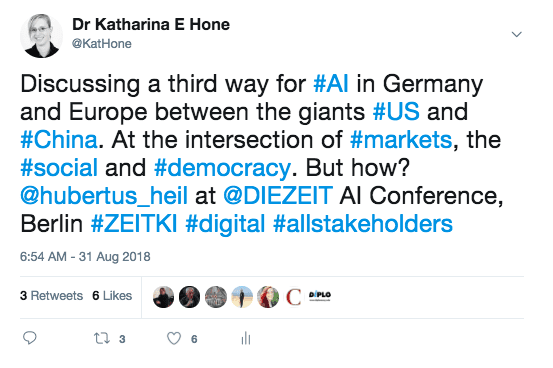 Mr Hubertus Heil, a social democrat politician and currently Federal Minister of Labour and Social Affairs, emphasised that Germany needs to find a third way when it comes to its AI strategy. He argued that Germany and Europe should cultivate a third way between, on the one hand, the USA and its free-market approach to AI innovation and, on the other hand, China with its state-sponsored and state-controlled approach.

Heil then went on to define this third way as rooted in three principles: market economy, social welfare, and democracy. I can’t help but imagine that the idea of a third way, articulated by a social democrat, somehow draws on Anthony Gidden’s 1998 book of the same title, which focused on bringing social democracy back to the centre of the debate.

Doing it the social way

While the idea of positioning Europe as a third option between the two AI giants, the USA and China, is certainly not unique to Germany, the strong emphasis on social aspects caught part of me off guard ‒ the part that is used to a more Anglo-Saxon approach.

Heil made a very strong statement when he argued that technological progress also needs to be social progress. Looking through my outsider’s glasses, I was struck by Heil’s emphasis on workers’ rights, workers’ organisations, and collective labour agreements that support the workers of the gig economy and of future AI industries.

Heil also raised questions of competition regulations for the big Internet companies in relation to data (implicitly referring to the Data for All law: ‘Daten für Alle’ Gesetz) in order to break monopolies on consumer data and foster innovation based on open data.

The future is now?

The next big step for Germany’s AI strategy will be the Digital Summit in December. Financial commitments for the coming years to support digital infrastructure and education are also taking shape. But beyond rhetoric, it remains to be seen to what extent a German or a European way to leadership in AI is feasible and what its cornerstones will look like in practice.

EuroDIG 2019: Highlights from The Hague