You are here: Home1 / NETmundial: On the path to Brazil

NETmundial: On the path to Brazil

Preparations are under way for the NETmundial meeting, which takes place on 23-24 April in São Paolo, Brazil.

Mr Echeberría elaborated on the origins of the NETmundial meeting, initiated by Brazil following interventions by President Dilma Rousseff at the 68th UN General Assembly in September 2013. Discussions continued during the Bali Internet Governance Forum (IGF), where the meeting took the shape of an international multistakeholder discussion on IG, with a focus on Internet principles and an IG roadmap.

The aim behind the NETmundial meeting was not to compete with the annual IGF or other processes, but to facilitate and feed into these processes. The IGF should remain the centrepiece of global IG landscape, Mr Echeberría said.

The physical limitations of the São Paulo venue have set the participation limit at 800 people. Around 200 representatives of governments and 100 representatives from international organisations including the ITU and UNESCO are expected to attend, together with another 500 participants from civil society, the technical community, the corporate sector, and academia. Applications to attend NETmundial in São Paulo, in the form of expressions of interest, were reviewed and prioritised to encourage the participation of as many countries as possible.

Online (remote) participation, including remote hubs, will be organised. These will follow the successful models which have been implemented by ICANN and the IGF for several years.

The meeting will run on a single track, with no parallel sessions, to facilitate discussions on the outcome document that will be prepared based on contributions received.

Mr de la Parra explained that the meeting was not entirely in reaction to the NSA revelations; it was also in response to the overall IG processes and open issues that require such a discussion. It is not a one-time event, but rather the beginning of a process.

Two aspects will be the main focus of the discussions: Internet principles, and an IG roadmap.  It is expected that ICANN globalisation, the transition of the IANA functions, and surveillance issues will be high on the agenda, although not expected to dominate the discussions. Some aspects – including multistakeholder mechanisms, diversity, openness, net neutrality, privacy, security, transparency, and inclusiveness – will have a much broader agenda. A set of ‘orphan issues’ for which there is no by-default existing organisation to deal with, are also likely be important.

The meeting’s aim will be that of reaching a common position – an outcome document – similar to the outcomes of the WSIS+10 review meeting in Paris in February 2013. It is hoped that the outcome paper will set an example for the IGF to follow in terms of tangible outcome. The paper is expected to contain a list of agreed principles and steps, including any objections. It is hoped that NETmundial will go beyond general concepts and principles as outlined by WSIS, and move towards concretising these general concepts, and identifying the lowest common denominators. While we cannot expect a revolutionary development or outcome from NETmundial, valuable progress should be welcomed.

What value will NETMundial bring to Internet users? It will enable the Internet community to participate and directly contribute to multistakeholder debates on IG. There is also a general need to have local multistakeholder-based discussions so that the IGF process can also take place on a local level with local policies.

As for the expected outcomes, Mr de la Parra said that ICANN wishes to see an improved ecosystem based on the multistakeholder model, and expects a mapping of issues to unite the ecosystem. Both speakers emphasised that NETmundial will not negotiate a resolution, but rather deliberate a common outcome document as a summary of agreed (unagreed) positions on principles and a roadmap.

Meanwhile, the 180 contributions that were submitted and made available on the NETmundial website  are now being analysed by the NETMundial team, which is expected to publish a draft document within the next few days. Other institutions also are analysing the contributions, including DiploFoundation who, as part of the Swiss-driven Geneva Internet Platform (GIP), is conducting a data-mining and discourse analysis. A draft declaration based on the findings will be presented during the launch of the GIP on 8 April.

Both webinar participants and guest speakers praised Diplo’s efforts to bring NETmundial closer to communities around the world – through data-mining and analysing the contributions, and through discussion webinars – and suggested that another webinar might be organised closer to NetMundial with a special focus on particular regions. 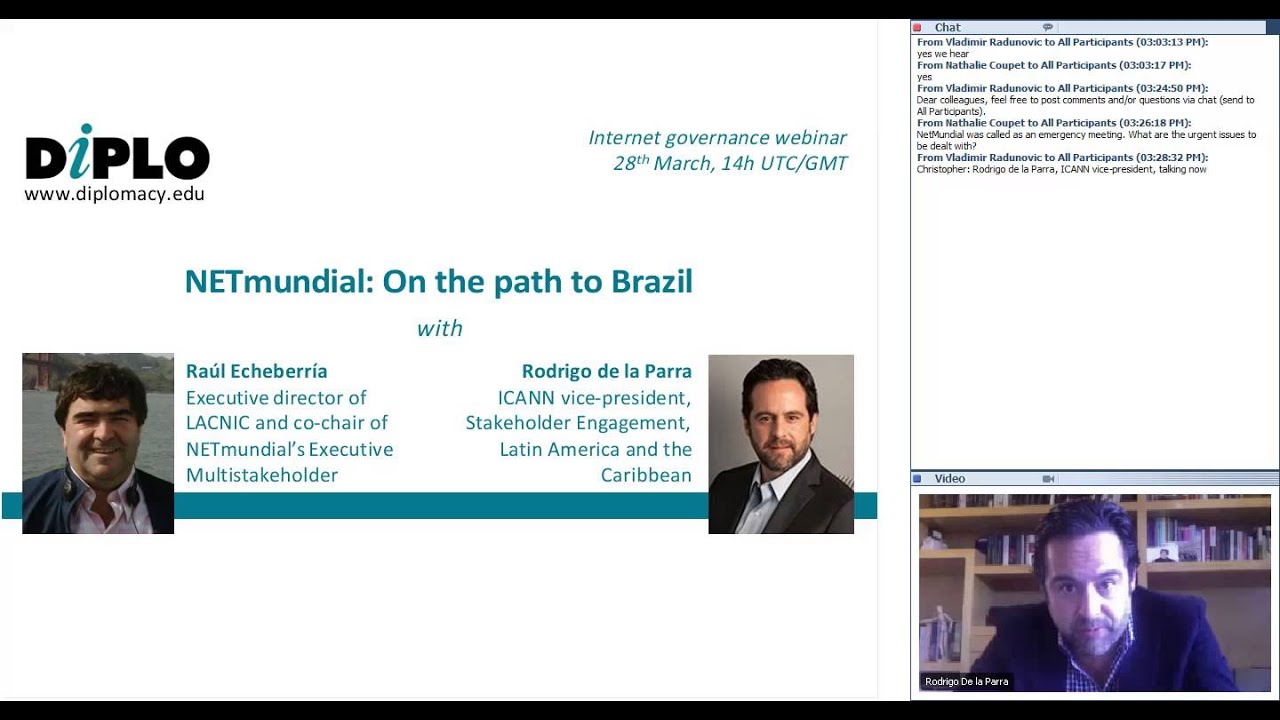 in which Mr Raúl Echeberría and Mr Rodrigo de la Parra also discuss questions and comments shared by the webinar participants, including: Does NETmundial have the potential to ‘concretise’ Internet principles? Will NETmundial unite the Internet community more or further polarise an already saturated subject of IG across the globe?

I’m not a ‘technical person’, but I don’t have to be

EuroDIG 2019: Highlights from The Hague