You are here: Home1 / Low-profile changes are what happen while we await the BIG change

If you are following recent Internet politics, you will have found hundreds of articles and blogs dealing with the main Internet governance battle, usually portrayed as a struggle between ITU and ICANN. The next big round in this ongoing battle is planned for December in Dubai at the World Conference on International Telecommunication (WCIT-12).

While we have been waiting for a ‘big’ events and possible changes, for better or for worse, the Internet governance scene has changed profoundly. The competition for position in Internet governance has made the main players, in particular, the ITU and ICANN, improve themselves. Over the last few years, both organisations have become more transparent and inclusive.  Even if they have not changed fast enough, they have a clear idea of what needs to be changed and the desirable way in which they should operate.

One particular example is eParticipation, where these two organisations have made major breakthroughs. In this process, the Internet Governance Forum (IGF) has played an interesting role as a ‘conveyer belt’ between the two main IG players. 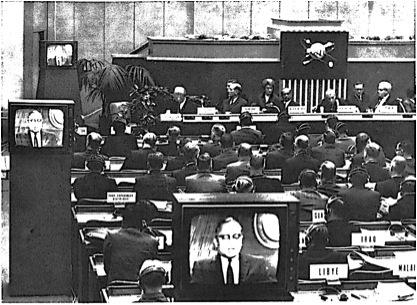 The ITU had a very early start in eParticipation back in 1963 (see photo). Later on, in the early 2000s, ICANN made major breakthroughs in the use of the Internet for international meetings. For example, ICANN started the transcription of speeches, which is fairly low profile, but has had high impact for change in international meetings. In 2006, the newly established IGF borrowed the idea from ICANN and started transcribing its sessions. The ITU did the same, in 2009, at the World Telecommunication Policy Forum. Today, in the Internet governance field, the minimum standard is to have active eParticipation. Many hosts  also make an effort to find funding for real-time transcription of the sessions. Examples from the ITU and ICANN have influenced regional and national Internet governance events.

The impact is broadening even beyond the Internet governance field. Today, the ITU is by far the most advanced eParticipation institution in the UN world. It has developed a special method for broadcasting sessions in all official UN languages. Organisationally, the ITU’s council discussed and adopted decisions for the introduction of eParticipation. Many international organisations are approaching the ITU to acquire its know-how in eParticipation.