These and many other developments, trends, and regional updates were covered during September’s just-in-time briefing on Internet governance – our monthly appointment on the last Tuesday of every month – which took place on 27 August 2019. They will also be summarised in the Internet Governance Barometer for September and in Issue 42 of the Geneva Internet Platform (GIP) Digital Watch newsletter.

A look back to events in September

Radunović spoke about major Internet governance events in September. The first substantial meeting of the Open-Ended Working Group (OEWG) on developments in the field of information and telecommunications in the context of international security took place in New York on 9-13 September. Risks emerging from cyberspace, application of international law, rules, norms, confidence-building measures (CBMs) and capacity building, as well as ways to establish institutional dialogue were on the agenda of the meeting. A team of GIP rapporteurs provided individual reports of the discussions, which can be accessed here. Radunović also spoke about the Sustainable Development Impact Summit; and the General Debate of the 74th session of the UN General Assembly (UNGA). As in previous years, the GIP will analyse the speeches for mentions of technology, data, and digital policy and the findings will be available in the September issue of the GIP Digital Watch Newsletter. 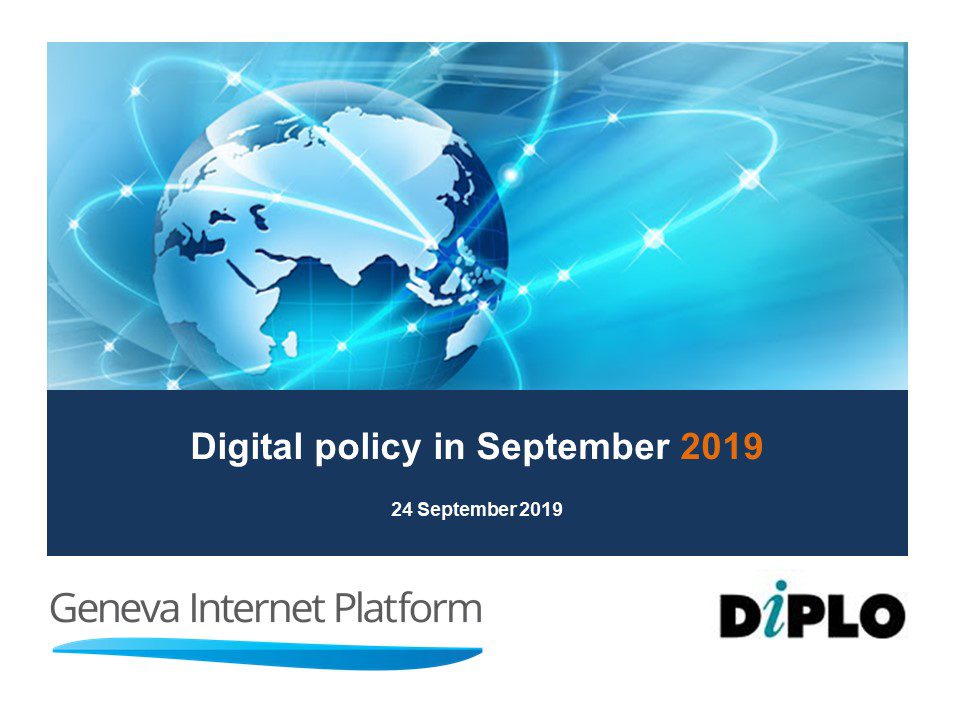 Radunović explained that the global Internet governance architecture will be under pressure because of the UN General Assembly general debate. Kurbalija  spoke about sustainable development, highlighting the Sustainable Development Impact Summit in New York. Kurbalija stated that the summit would hopefully discuss: digital tools for achieving SDGs, use of data for monitoring the implementation of SDGs, and possible use of SDGs as a guardrail for the development of artificial intelligence (AI). More on this can be read in Kurbalija’s article Accelerating action: SDGs need ‘digital steroids’. Radunović later explained that security was a prominent issue in September, with the first substantive session of the OEWG, and cyber-attacks on Wikipedia and Ecuador. In terms of e-commerce and the Internet economy, it was noteworthy that a bipartisan coalition of attorney generals launched an antitrust investigation on Google in the USA, while the EU’s antitrust chief called for more rules on the company’s use of information. Expounding on AI developments: Radunović highlighted that a report found that at least 75 countries use AI surveillance technology; the US Air Force published its AI strategy; and the Moroccan data protection authority (CNDP) announced a temporary facial-recognition ban.

Mixed rules for gig workers are being adopted, Maciel explained. California passed the Assembly Bill 5 which entitles gig workers to employment rights, to take effect on 1 January 2020. However, the Brazilian Superior Court ruled that Uber drivers are independent contractors, based on the fact that drivers have flexible working hours and the freedom to manage their rides. There is a legal patchwork of different rules, which brings uncertainty to workers and companies operating in the gig economy.

Facebook’s cryptocurrency Libra is facing opposition, Kameri highlighted. French finance minister Bruno Le Maire said that France and the EU ministers of finance cannot authorise the development of Libra on European soil. He also issued a joint statement with German Finance Minister Olaf Scholz that virtual currencies can pose a serious threat to consumers, and that France and Germany need more input from Facebook and others in order to clarify the idea behind the cryptocurrency. Libra stated it will not launch Libra until full compliance with EU regulation is reached, and committed to co-operate with regulatory authorities to achieve a safe, transparent, and consumer-focused implementation.

New digital ID programmes will be rolled out, Höne underlined. Malaysia, Singapore, the Irish city of Dublin, and the Catalan region of Spain all announced digital ID programmes which will mostly use mobile phone applications, and blockchain technology and ledgers. These examples can be replicated in other countries, and help achieve the SDGs main aim to ‘leaving no one behind’. However, questions about the security and use of the data collected are being raised.

The next Internet governance briefing is on 29 October. Registrations are open.

The next issue of the Digital Watch newsletter will be published in the beginning of October. DiploFoundation and the International Trade Centre (ITC) will organise a workshop titled ‘Trade norms on access to the source code: What is the impact on trade in services and development?’ on 10 October at the WTO Forum. DiploFoundation will also launch three digital policy courses mid-October: Cybersecurity, AI policy, and the GIP Digital Commerce course. Applications for Master’s in Contemporary Diplomacy with specialisation in Internet governance will be closing mid-October. On 29 October, the GIP will hold the October IG briefing.

Shita Laksmi gave updates from Asia, which included an Internet shutdown in West Papua, Indonesia; and 5G developments in Cambodia.

Wanda Perez provided updates from the Caribbean regarding the World Bank’s approval of a US$ 30.6 million project to build resilience of public health systems in the Organisation of Eastern Caribbean States (OECS), and Google’s Caribbean School of Data (CSD).

Hanane Bujemi highlighted the developments from the Middle East and North Africa regarding a report on Middle East fintech sector’s projection to raise more than US$ 2 billion by 2022, and mobile travel bookings dominating the Middle East.

2020: The year of online participation 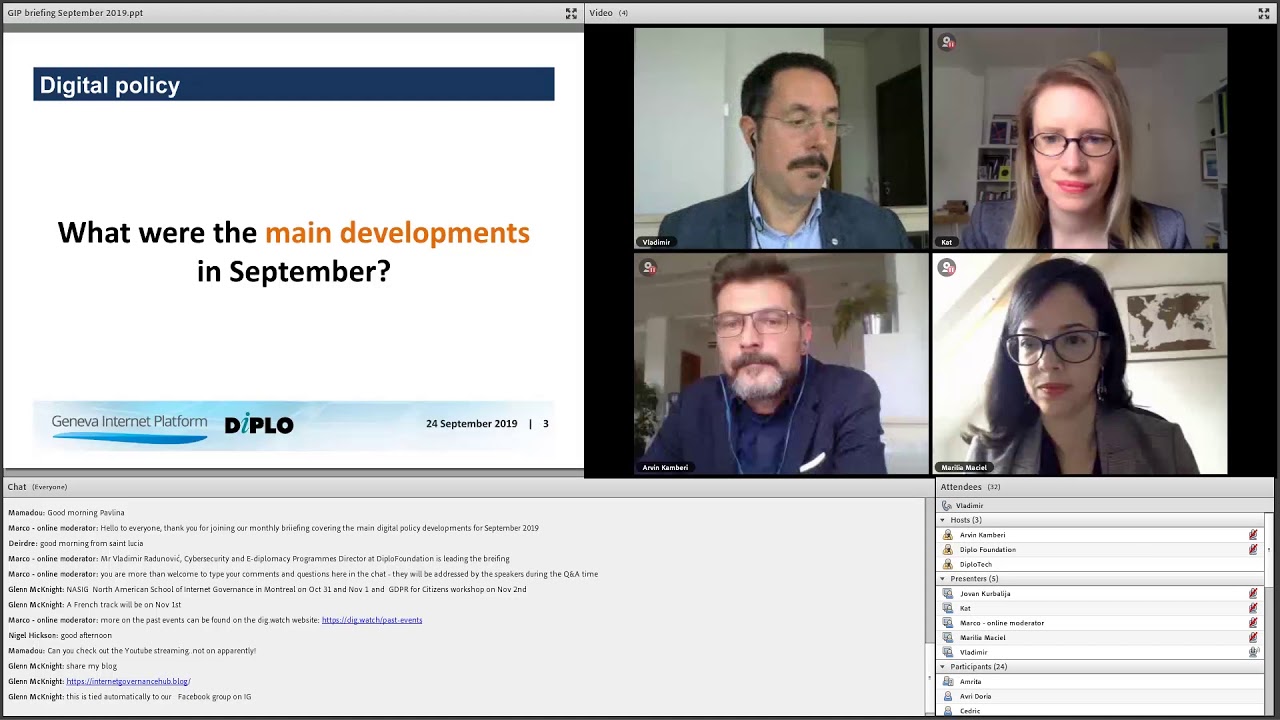