You are here: Home1 / Internet governance in September 2018

Countries stepping up their cyber offensive capabilities, data governance debates intensifying, and the calls for modernisation of the World Trade Organization (WTO) continuing were among main digital policy developments in September 2018.

These and many other developments, trends, and regional updates were covered during September’s just-in-time briefing on Internet governance – our monthly appointment on the last Tuesday of every month – which took place on 25 September 2018. They were also summarised in the Internet Governance Barometer for September, and in Issue 34 of the Geneva Digital Watch newsletter, published on 2 October 2018.

Dr Stephanie Borg Psaila, interim director at DiploFoundation and editor of the GIP Digital Watch observatory, gave an overview of some of the events held in September 2018, such as the 39th Session of the UN Human Rights Council, and the first meeting of the UN High-Level Panel on Digital Cooperation.

Dr Borg Psaila then spoke about the main digital policy updates in September, including: 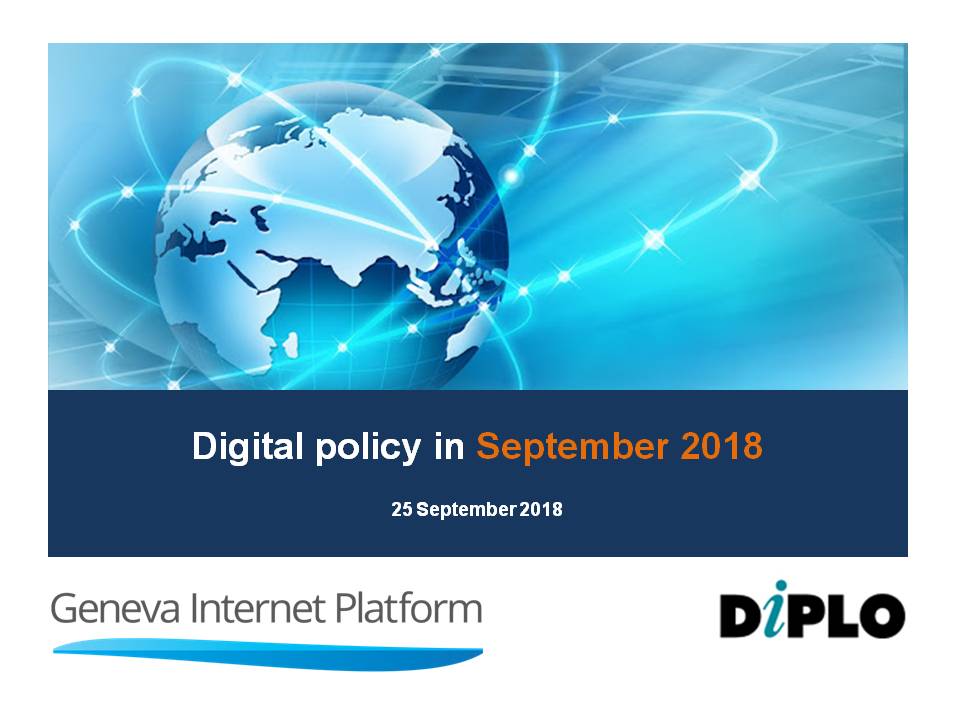 Among the topics discussed were the impact the European Commission’s proposed rules regarding removing terrorist content online will have on freedom of expression online; the multistakeholder approach of the new US cybersecurity strategy; the impact of future modernisation of the WTO on developing countries; and the extraterritorial effects of the right to be forgotten.

Dr Borg Psaila then spoke about the upcoming events in October, including the UN High-Level Panel on Digital Cooperation: Virtual Town Hall Meeting, the WTO Public Forum, ICANN63 Annual General Meeting, and CyberMediation and the role of blockchain and AI.

Grace Mutung’u gave an overview of digital policy developments in Africa. The Zambian government approved introducing taxes on Internet calls to protect local telecom companies. Activists put pressure on Benin to abolish social media taxes imposed on ‘open Internet services’ which are not based in the country and therefore do not contribute to the local economy. Kenya introduced excise taxes of 15% on Internet services, and 20% on mobile money transfers. The report for the Working Group on the Universal Periodic Review (UPR) – Cameroon raised concerns over the effect of Internet shutdowns on freedom of expression, assembly and association. News that the US will begin flying armed drones out of a remote base in Niger has raised concerns about human rights violations in the use of combat drones.

Shita Laksmi provided updates from Asia. The World Economic Forum (WEF) on ASEAN was held in Ha Noi, on 11-13 September with the theme, ‘ASEAN 4.0: Entrepreneurship and the Fourth Industrial Revolution’. The Deputy Prime Minister of Singapore Teo Chee Hean announced the establishment of the ASEAN – Singapore Cybersecurity Centre of Excellence. The ASEAN Ministerial Conference on Cybersecurity (AMCC) followed up on the directions given by ASEAN leaders during the 32nd ASEAN Summit in April 2018, specifically to better co-ordinate ASEAN cybersecurity efforts.

Updates from the Caribbean region were provided by Wanda Perez. Grenada, Saint Lucia, and Saint Vincent and the Grenadines have decided to collaborate to build their broadband infrastructure, under a historic public-private partnership (PPP) arrangement. The fourth International Telecommunication Union (ITU) Regional Frequency Coordination Meeting for Central America and Caribbean Region took place in Belize City, between 11-14 September 2018. The outputs from the meetings facilitate the region’s transition from analog to digital terrestrial television and the allocation of the digital dividend.

GDPR to take effect one year from now

Cybermediation: What role for blockchain and artificial intelligence? Developing data capacities in the Caribbean
Scroll to top