These and many other developments, trends, and regional updates were covered during June’s just-in-time briefing on Internet governance – our monthly appointment on the last Tuesday of every month – which took place on 25 June 2019. They will also be summarised in the upcoming Internet Governance Barometer for June and in Issue 41 of the Geneva Internet Platform (GIP) Digital Watch newsletter.

A look back to events in June

The main developments in June 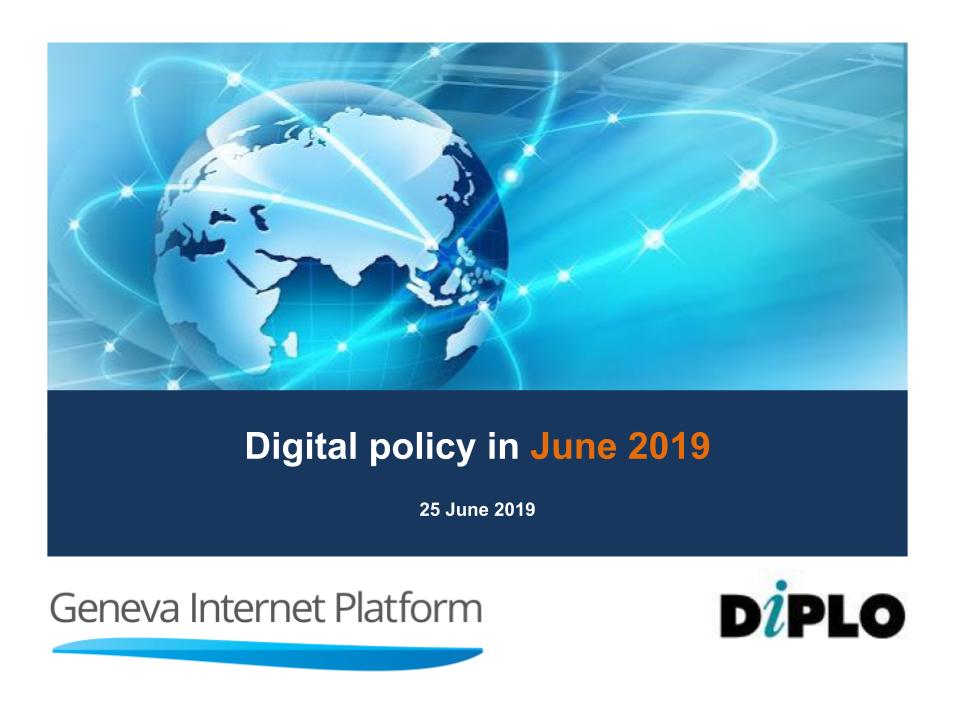 The report of the High Level Panel on Digital Cooperation was launched on 10 June in New York and 17 June in Geneva. Kurbalija briefly presented the    five sets of recommendations the report contains: on digital society and economy; building human and institutional capacities (including help desks); human rights and human agency (including the question of artificial intelligence [AI] and providing guidelines for the development of AI); trust, security, and stability; and on the mechanisms for digital co-operation;  and overall digital governance. The launch of the report was followed by a meeting with permanent missions in New York, a meeting with the UN Foundation, a session at RightsCon, a session at EuroDIG 2019, and a presentation in Geneva unpacking the panel’s recommendations organised by the GIP. Speaking of the UN follow-up on the recommendations, Kurbalija stated that the UN is discussing the exact construct of the consultation process, but that the process will be inclusive, multistakeholder, and  involve different actors. In the meantime, different organisations started discussing how to contribute to the implementation of the panel’s recommendations – EuroDIG launched European consultations and the actors from Geneva community discussed how they can contribute. An important milestone in consultations will be the Internet Governance Forum 2019 (IGF) in Berlin. The UN supported consultations will last from 6 to 10 months, and important dynamics will be built around the celebration of 75 years of UN in 2020, which the UN Secretary-General would like to use to discuss the current state of multilateralism and how to make it more inclusive.

Radunović then spoke about security related developments in June. He noted that there have been media reports that the US Cyber Command conducted cyber-attacks against Iran’s computer systems which control rocket and missile launches. The attack happened shortly after the US President Trump dismissed the option of a conventional attack as unproportioned response to alleged Iranian attacks on two oil tankers in the Gulf of Oman. This lead to analysts commenting that the cyber-attack was deemed proportionate by the US government. Radunović then spoke about reports that the USA is stepping up digital incursions into Russia’s electric power grid. These reports are worrying, he highlighted, because all international law and international agreements deem attacking a country’s critical infrastructure as irresponsible behavior in cyberspace. Next, Radunović spoke about the organisational meeting of the UN Open-Ended Working Group (OEWG) held on 3-4 June in New York, where the group agreed on rules of procedure and re-confirmed that decisions will be taken on a consensus basis. The group will be chaired by Amb. Jürg Lauber, Permanent Representative of Switzerland to the UN in New York, and will gather all the interested UN member states. Lastly, Radunović invited the audience to visit the GIP Digital Watch observatory’s dedicated UN GGE and OEWG page, which follows the composition, work, and discussions of both groups.

Many of these topics are discussed in more depth in Diplo’s Cybesecurity course scheduled for October 2019.

Kamberi explained that the Libra digital currency is a joint endeavour of Facebook and 27 assembled companies. Libra is a ‘stablecoin’ – a cryptocurrency backed by a basket of major fiat currencies. Kamberi explained this means that users will be able to buy Libra with fiat currencies, not by mining. The Libra Association will run a private blockchain on Libra once its developed, govern the emission of Libra currency, and work on monetary policies around the currency. It will be based in Geneva and will consist of major money transfer companies such as PayPal, Visa, and MasterCard; online companies such as Uber, Lyft, Spotify; and a consortium of telecom operators, the biggest of which is Vodafone. Facebook will be represented in the Libra Association via its new subsidiary company Calibra, which will create digital wallets and store financial user data separately from general Facebook user data. However, the association might run into regulatory problems concerning the creation of primary emission, the reserves of the currency, and the Libra Investment Token. Issues will also arise around adherence to existing consumer protection laws, as the members of the association ‘are committed to working with authorities to shape a regulatory environment that encourages technological innovation while maintaining high standards of consumer protection’. Libra could bring significant changes to the banking system. When users use in-app payment systems (like WeChat), they transact fiat currency and financial organisations control this money flow according to the global financial framework. Calibra users will transact Libra cryptocurrency which can then be used to convert to fiat currency; however, because of its global nature, users might also decide not to convert Libra, but actually save it for further use. Currency conversion might add up significant costs for users in cross-border money transactions. However, to say that it will change the face of cryptocurrency would be an overstatement, especially since it is not a cryptocurrency as we know it – it will not be built on open blockchain but rather on a private blockchain run by the association under its own monetary policy.

Online rental businesses have come under fire, Maciel explained, with regulation being put in place in several cities around the world. In Europe, ten major cities (including Amsterdam, ​​Berlin, Brussels, Munich, Paris) asked for help from the European Commission to address problems raised by Airbnb and other holiday rental websites, as locals have been displaced from the housing market. Movements to regulate these platforms are also happening in New York, Dublin, San Francisco. At the same time, advocacy groups made up of Airbnb hosts called ‘homesharing clubs’ are being created, and homeowners who rent their homes on Airbnb are fighting against stringent regulation of these platforms.

Renewed push for digital taxing of tech giants is coming from G20 finance ministers, Borg Psaila explained. The ministers agreed to compile common rules on taxation to close loopholes used by the tech giants by 2020. The 2020 deadline might be too ambitious; as similar attempts have either not seen enough progress (OECD) or have been dropped altogether (EU). Psaila highlighted there are three tracks related to taxation: the OECD process, the G20, and national tax rules. Taxation and digital economy are and probably will remain very high on governments’ agenda.

Differences between Libra, M-Pesa, and WeChat were discussed; the issues that might arise with the Libra Association issuing Libras; Libra reaching the unbanked; the possibility of Libra undermining national currencies; the lower cost of using Libra; and the possibility of money laundering were among the topics discussed during the interactive session of the briefing.

The next Internet governance briefing is on 27 August. Registrations are open.

Borg Psaila gave an overview of the upcoming activities of the GIP and DiploFoundation, starting with Unpacking the HLP’s Report: Contributions from Geneva, University of Geneva’s Internet L@w School ending, and publishing Issue 41 of the Geneva Internet Platform (GIP) Digital Watch newsletter. Borg Psaila also spoke about the launch of the Digital Watch 2.0, which is now more data-driven. She announced the in situ event Digital Policy in 2019: a mid-year review. She also reminded that the GIP will organise a side event during the 41st session of the UN Human Rights Council, as well as reporting from sessions related to digital policy.

Jacob Odame Baiden provided updates from Africa. Huawei and the African Union (AU) signed a memorandum of understanding (MoU) to strengthen their technical partnership on ICT. The Ethiopian parliament has reportedly approved a draft law aimed at enabling foreign companies to invest in the countries telecommunications industry.

Noha Fathy highlighted the developments from the Middle East and North Africa. Internet shutdowns were reported in Sudan. RightsCon 2019 in Tunis discussed the impact of technology on society and human rights.

Andre Edwards provided updates from the Caribbean. The fiber optic cable connecting Grenada, St Lucia and St Vincent and the Grenadines has been completed. GK General introduced a cyber insurance product that will provide insurance protection for individuals and commercial entities with revenue below US$10 million. 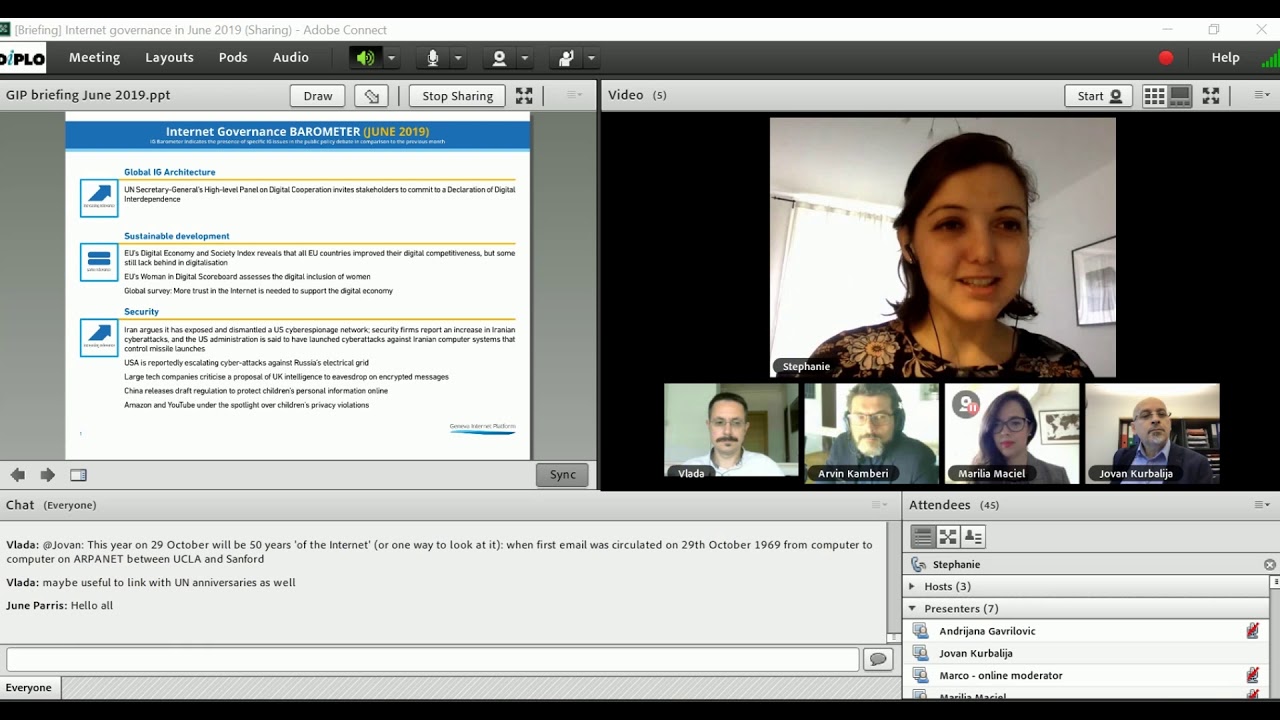