Unsettled weather, with fresh winds, and storms at times, sums up the forecast for Internet governance (IG) in 2015, according to Diplo’s director Dr Jovan Kurbalija, speaking during Tuesday’s ‘crystal ball’ exercise – an annual event to discuss IG predictions for the year ahead. The discussion gathered over 80 participants online and in situ from Geneva. 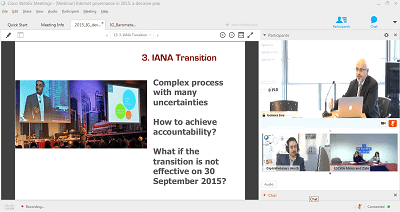 The crystal ball exercise takes place in context: using terminology from US Secretary of Defense Gordon Rumsfeld’s famous quote, the year includes (a) developments expected during meetings and events planned for the year (known knowns), (b) debates which we know will take place but which will unfold in uncertain ways (known unknowns), and (c) unforeseeable developments that will undoubtedly take place during the year (unknown unknowns).

Predictions, reality checks, and IG in 2014

The spell of cloudy and stormy weather has persisted. It is not difficult to see why: cybersecurity threats are on the rise, users’ rights and freedoms continue to be threatened, and public interest is often sidelined by other dominant interests.

Dr Kurbalija’s predictions for cloudy weather with sunny spells and windy at times in 2013, and stormy with sunny spells in 2014 were in fact quite accurate. While some issues gained or lost importance due to known unknowns and unexpected twists, most featured on global agendas as predicted. Developments of the global IG architecture following the NETmundial meeting (April 2014) dominated the year, followed by the IANA transition process which kick-started right after the NTIA’s surprise announcement in March 2014; online privacy and data protection, and Net Neutrality also dominated discussions last year.

The community confirmed the importance of these developments in a survey conducted by Diplo and the Geneva Internet Platform (GIP) in December 2014. The survey findings show that the NETmundial meeting was considered the most important event in 2014, with the IANA transition process (closely followed by surveillance and privacy/data protection) as the most important development. ICANN CEO Fadi Chehadé was voted as the most prominent IG personality in 2014.

Dr Kurbalija identified seven main issues that are likely to dominate the 2015 agenda:

Referring to the vibrant online debate on the webinar platform and Dr Kurbalija’s main predictions, Diplo’s Vladimir Radunović added that the US FCC’s rules on network neutrality will be important not only for the USA, but worldwide. Given the civil society’s and corporate sector’s involvement, a decision is likely to send a signal in favour of the multistakeholder model, and will also serve to highlight the roles and responsibilities of the actors when it comes to promoting and protecting the public interest.

On cybersecurity, Mr Radunović said that international peace and security aspects were now emerging. The number of cybersecurity measures, including confidence-building measures, sharing of information, and diplomatic training, were also increasing. Cybersecurity was thus moving away from the realm of engineers and the technical community to the level of leaders, diplomats, and other high-level representatives.

In a comment from the audience, Richard Hill from the Association for Proper Internet Governance (APIG) added that the newly formed Internet Social Forum was broadening the debate among players who have not yet been very active.

From the Internet governance barometer: developments in January and  February 2015

An innovation from DiploFoundation and the GIP, launched by Dr Kurbalija during Tuesday’s webinar, was the Internet governance barometer, an analysis of specific IG issues in the public policy debate in comparison with those of the previous month.

With regard to the IG barometer for January, Dr Kurbalija explained that while there were no major developments in online privacy and data protection, jurisdiction, and ICANN and new domain names, the cybersecurity debate heightened following President Obama’s State of the Union address, and the reaction to the Charlie Hebdo attacks. Cybersecurity was also high on the agendas of last week’s World Economic Forum annual meeting in Davos.

January also saw the entry into force of the 2012 International Telecommunication Regulations.

Next month will also be particularly busy for online privacy and data protection, with preparations for the UN Human Rights Council meeting on 2-27 March 2015.

The discussion included additional comments from online and in situ participants. One addressed the lack of importance of the development objective leading the participant to ask whether the multistakeholder model was actually working, given that we are still addressing problems which the model never addressed. Other comments referred to the NETmundial Initiative, the newly announced Internet Social Forum, and zero-ratings in the Net Neutrality debate.

Listen to the briefing recording for the full discussion: 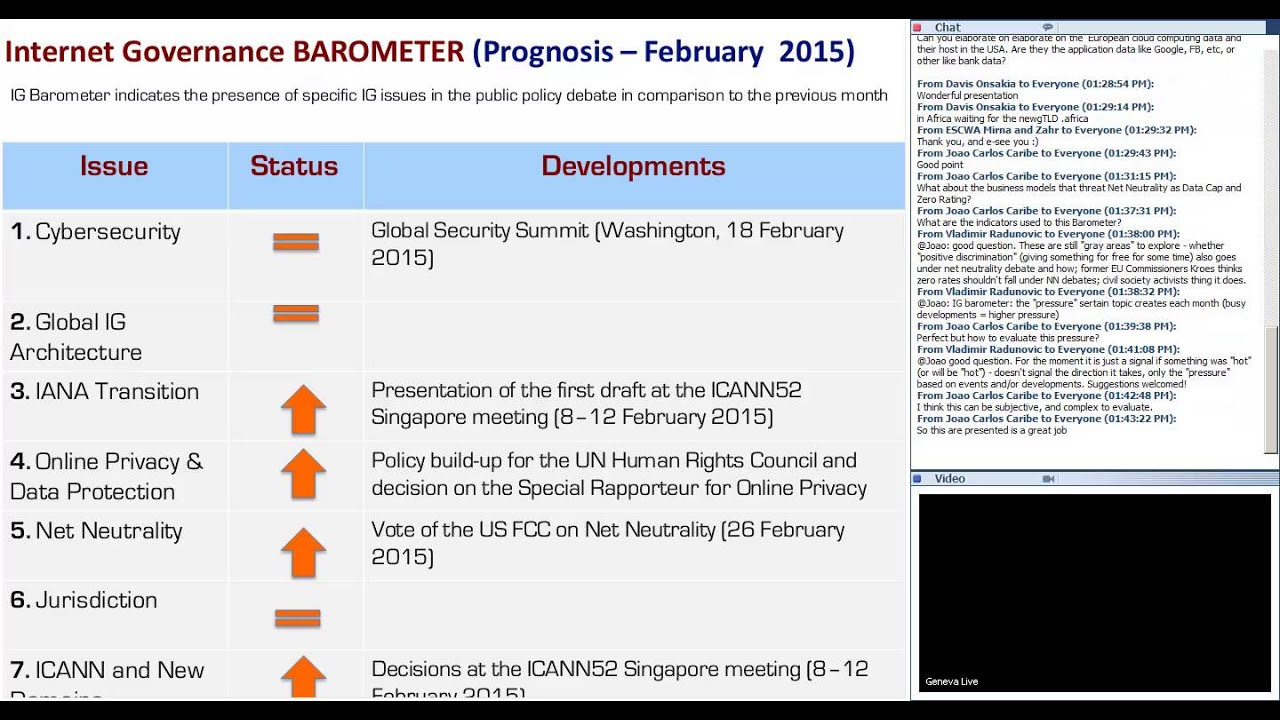