You are here: Home1 / I share therefore we are

Facebook’s $1billion purchase of the photo-editing and display platform Instagram has split the digital commentariat, illustrated by two differing perspectives  in the same UK newspaper, the Sunday Observer. An enthusiastic piece in the main paper argues it’s who we are that makes us share and we share because we like it. In early research with Tim Davies and others on the potential of social networking, as we then called it, for UK Youth Work and HIV/Aids Communication  we argued that social media tapped into our essential nature as social animals. And that applies to all forms of content sharing, whether online or via paper leaflets in Tahrir Square, the latter of course an icon both to the mobilising power of online media and the centrality of physical gatherings in achieving change. However, research quoted in the Observer article takes it further and suggests: 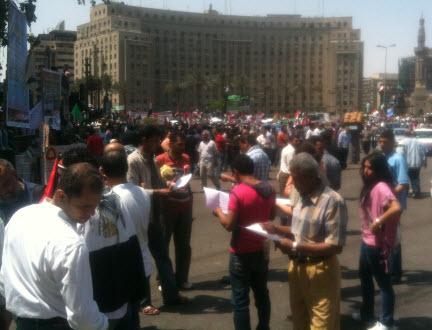 “Social media have tapped into something quite fundamental and the sharing urge in human nature may stem from something more basic than anything else: simple arousal and the fight-or-flight response that we share with our distant ancestors. In scientific terms, this means the activation of our autonomic nervous system; in simpler terms, that extra boost of energy, the quickened heartbeat, that tingling of nerves that says something in the environment has caught my attention…..

……. And while the sharing urges aren’t new they are now activated on a near-constant basis. One need only look at the proliferation of sites that are devoted to sharing exclusively – Reddit, Digg, Stumbleupon – to see the phenomenon in action. I see, I react, I share. I become part of a community and your “likes” validate me. I feel rewarded with every retweet and endorsement, while conversely I feel sad if something just kind of plops into a virtual neverland. Was it something I said? In fact, being virtually rejected actually activates the same brain areas that are associated with physical distress, the dorsal anterior cingulate cortex and the anterior insula.”

As well as going some way to explaining the fanatical following of celebrities on Twitter and other social media it underscores the importance of personalised content for engaging followers and audiences, something which is always going to be difficult for public officials in embassies and MFAs. But it doesn’t follow that we need more  infra-red or cartoonised photos of embassy receptions. It points instead to the ever-increasing importance of  the major platforms as they hunt relentlessly for more eyeballs and fingers.

“Recent internet history suggests it may be a huge haul of overpriced pixels” says the ineffable John Naughton in a jaundiced, but– as ever – insightful perspective on the purchase of Instagram. From a list of recent headline-grabbing acquisitions he argues that,

“”At the moment it looks as though YouTube was the only really shrewd acquisition in the sense that one can at least envisage a way that it might eventually turn into a serious money-pump for Google. ICQ was a disastrous mistake for AOL, as was MySpace for Murdoch. And it’s hard to see how Microsoft will ever get its money back from Skype.”

And then any of us who have uploaded information to Wikipedia may ourselves feel a little jaundiced about last week’s hot story in many African online spaces. That was the announcement that access to Wikipedia will be free on mobiles in Africa and the Middle East. Free for users of Orange phones that is, representing a percentage of the fraction of Africans who have smartphones. While there will certainly be positive outcomes from the deal between the Wikimedia Foundation and Orange and it is at least arguably more important for people’s lives than Facebook’s purchase of Instagram, it is hard not to feel uneasy about the commodification of publicly contributed  content. I retreat to Naughton:

“So what has Facebook bought? Not the platform – Zuckerberg and co could have built that in a weekend. No, what Facebook bought was Instagram’s users. Which illustrates the First Law of Online Services: if they’re free, then you’re the product. Caveat uploader”

What can Twitter diplomacy learn from Ancient Greek diplomacy?

Wikipedia and the battle of words over political events in Egypt

GUEST BLOG: How the USA is using e-diplomacyIs it time for a review of the Vienna Convention on Diplomatic Relations?
Scroll to top