You are here: Home1 / [Guest blog] The Internet of Things: keeping pace with technology

What differentiates the Internet of Things (IoT) from today’s Internet-in-general is the belief that one day everything can be online and accessible. The IoT lives connected to the Internet, as we know it today; it is not a separate Internet.

The extremely generalised ideas surrounding the IoT mean that nearly any new electronic device can be marketed with reference in some way to the term IoT: all it needs is just a smattering of online capability. This newfound level of marketing within the electronics industry, has led to a very high hype-factor associated with the term IoT. Maybe this hype is well founded? Maybe it’s not? Only time will tell. According to the Gartner Technology review we have not yet reached the peak of the hype.

Independent of how widespread the hype is or is not, there’s no doubt that we are moving into a world where consumers will purchase enormous numbers of devices which in some way will communicate online. Whereas today we live in a world where humans interact with devices (laptops, tablets, mobile phones) in order to create data or post data, the future looks different.

‘The fact is that our social future will be determined by the human qualities of the activities being mediated through hundreds of millions of programmed devices, and by our ability consciously to resonate with and thereby to recognize these qualities.’ Steve Talbott (2003)

Will our fridge refill itself with eggs and milk from the local supermarket or maybe a new division of Amazon? It’s this new world that means policymakers should take a look at both existing rules that govern how we communicate and perhaps, much more importantly, the rules around how we store data.

Data could be the key issue with the IoT. Even today there is a growth in online data that’s created without any human review. The amount and depth of that data will only increase as the IoT takes hold within society. How will policymakers react to these new communication capabilities built into cars, refrigerators, running shoes, pacemakers, and all manner of other devices? How will these new devices be viewed when we realise we are posting potentially private information into a massive cloud storage system? Independent of how useful we find these devices for our daily lives, there’s a telling digital trail being left scattered around the Internet’s vast data centres. The IoT as a category for the devices may succeed; the IoT’s data creation may well be its Achilles’ heel.

There are a lot of good things about the IoT. Consumers of electronics are clearly in favour of more online capabilities and it’s those consumers who will dictate how the market place evolves. Early projections show that consumers like posting their daily workouts or jogging maps online via social media. In fact that may well be the saving grace for the IoT’s data.

Considering that privacy is a key element of how social media sites operate, then IoT data being posted to social media sites could mean that the IoT data is as well protected as general data within those sites. For example, today, when you post a simple update or picture on Facebook or Twitter, Instgram, etc., you can have the privacy setting as open or as closed as you require. The same could be implemented, should you really want your refrigerator’s contents shared. The status of your milk or eggs could be shared with just friends and colleagues or with the whole world. The fact that this sharing could extend from a trivial example like your fridge to something more complex like your pacemaker or dialysis machine (sharing vital stats directly with your doctor) is where there’s still a lot of careful review needed. All in all, the fact that the consumer is thinking positively about this shows there’s a massive future for the IoT.

Missed the November IG webinar on the Internet of Things, with Desiree Miloshevic? View the webinar recording here: 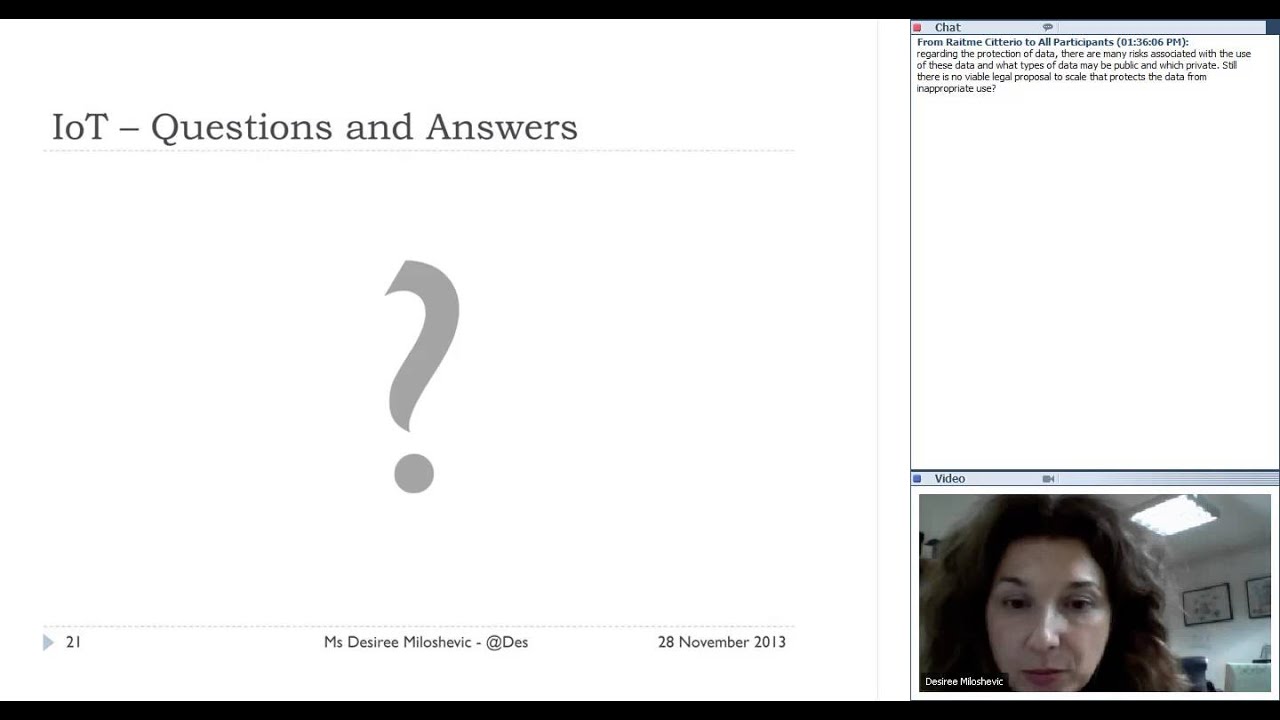 Webinar digest – International Law for DiplomatsMandela, a giant of empathy
Scroll to top