You are here: Home1 / Diplo director addresses Torino symposium on evolution of the Internet...

As Internet governance rises in complexity, we are faced with a growing challenge to bridge policy silos, DiploFoundation director Dr Jovan Kurbalija explained during a symposium on The Evolution of the Internet Governance Ecosystem, taking place in Turin, Italy, today. 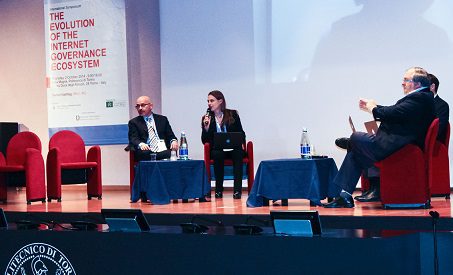 Dr Kurbalija said that as a result of the rising complexity of IG, DiploFoundation was currently updating its IG illustrations to reflect the importance of human rights and cybersecurity issues, including the IG Building Under Construction – which will see two new floors as well as elevators connecting the building’s storeys –and the ‘subway’ illustration A Journey through Internet Governance.

He introduced the Geneva Internet Platform and its functions, stressing the role of Geneva as a hub, and also explained the GIP’s latest text-mining analysis of this year’s Internet Governance Forum (IGF), which was based on verbatim reporting of the IGF proceedings, considered a goldmine for research.

The symposium, which forms part of an ongoing Network of Centers (NoC) event series on the future of Internet governance organised by the Global Network of Interdisciplinary Internet and Society Research Centers, serves as the conclusion of the first phase of a global, IG research effort within the NoC and is also intended as an initial contribution to the NETmundial initiative.

The event is being live-streamed here.

The Internet Balkanization FragmentationBitcoin: boom or bust?
Scroll to top