You are here: Home1 / Center to Periphery: differentiating spheres of control in China’s cyb...

Center to Periphery: differentiating spheres of control in China’s cyberspace

International news features regular reports of tensions on China’s borders. Relations along its maritime frontier, for example, are dominated by acrimony over the disputed Spratly and Diaoyutai/Senkaku Islands. Thousands of kilometers to the west, China closely guards its Central Asian borders against the infiltration of Islamist extremists.

Respect for and protection of national sovereignty has long been a cornerstone of Chinese foreign policy, and it defines how Beijing conducts itself within the international system. Increasingly we are witnessing this not only in the geopolitical space but in cyberspace as well.

Utilizing a center-periphery approach, this two-part post will provide an overview of how China’s ideas and uses of geopolitical space are paralleled in the virtual world and in how Beijing controls its cyber borders.

Popular observations of Chinese notions of geographic, political and imaginary territory focus on borders and their fortification. Catch phrases such as ‘bamboo curtain’ and ‘great firewall of China’ reference historical symbols of China’s territorial opacity and ideational isolationism. They speak of a paranoid defensive posture in which impermeable borders protect all within from foreign aggression or contagion.

Looking a little deeper we find the idea of Chinese boxes – a series of boxes of graduated size, fitting into each other like the components of a matryoshka doll. This onion skin ordering is often used as a metaphor for the existence in China of borders within borders.  It describes the concentric layers of meaning and security that characterize the spatial hierarchy of the walled Chinese compound, the medieval Chinese city and the Chinese state itself.

This spatial hierarchy has long been a feature of the Chinese state, manifest historically in centralized bureaucracy, systems of tribute, concessions and treaty ports, autonomous regions, special economic zones (SEZs), special administrative regions and free trade zones. Viewed through a center-periphery model, we see the center organizing and utilizing spaces on its peripheries in different and often contradictory ways. 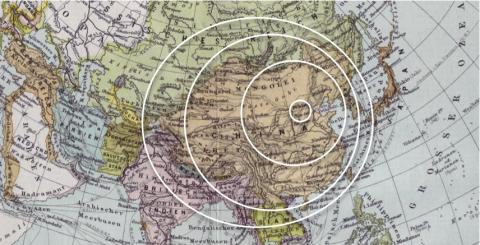 In contemporary China we see certain spaces along the country’s geographic periphery subjected to lifecycles of controlled experimentation and contestation. In liberalized trade zones, such as SEZs, controlled economic policy experimentation contends with the maintenance of political and ideological control. In restive border regions, the center attempts to balance its minority nationalities policies with nationalist security-driven imperatives.

The frontier remoteness of peripheral localities makes them ideal spaces for risk taking by the center, yet it also makes them risky infection points for the transmission of unwanted foreign trouble. Despite possessing nominally ‘autonomous’ or ‘free’ status, these sites of contestation are heavily controlled spaces in which risk is managed, ordered change effected and the center remains one step ahead.

China’s ethnic peripheries have long shared a problematic relationship with the center. The autonomous regions of Tibet and Xinjiang, for example, portrayed by Beijing as examples of the inclusivity of the poly-ethnic Chinese nation, are also sites of separatist violence and discontent. Ironically, the center is perhaps more present here than in less far-flung provinces, protecting borders against the ‘extremist’ influence of militant Islamism and the ‘Dalai clique’, and monitoring neighborhoods for suspicious activity. Domestically, the Chinese Communist Party (CCP) must be seen to be maintaining firm control over these peripheries as a measure of its competence to rule overall.

In the post-Mao reform era, China’s coastal peripheries have presented a very different set of challenges. 1980 saw the establishment of Shenzhen in the southern province of Guangdong as China’s first Special Economic Zone. Geographically remote from the center, Shenzhen became the testing ground for export-based capitalist reform within a hitherto closed communist system. Its proximity to the coast and to Hong Kong made it ideal for trade; its remoteness from Beijing meant that any failures or unintended outcomes might be quarantined – and political fallout minimized.

SEZs, coastal development zones, technological and industrial development zones and free trade zones are now located throughout China. The success of Shenzhen symbolizes the triumph of China’s policies of ‘reform and opening up’ in their careful balancing of economic liberalization and political control. This success avoided for the CCP a perestroika-type fate and has underwritten its modern era economic performance-based legitimacy.

Quarantined peripheral zones have also been temporarily created by China’s political elite as a way of managing risk in the hosting of events of international significance. The 1995 International Women’s Conference, held in Beijing, is a curious example of this. After authorities reportedly feared participants would engage in political activities, the 30,000 registered attendees of the conference’s NGO forum were forced to convene in Huairou – a sleepy town 60km from central Beijing.

At one point, authorities allegedly banned all taxis from ferrying passengers between Huairou and the main UN conference site, and outrage over the level of surveillance participants were subjected to resulted in organizers almost closing the forum down. Despite the controversy, the quarantining of event served the purpose of containing the perceived risks that it posed to a host government wary of inviting trouble. As described in part two of this post, the 2008 Beijing Olympic Games was to provide the context for authorities to demonstrate a not dissimilar approach.

But what does all this have to do with the virtual world? Part two, which utilizes the center-periphery approach to analyse the management of China’s cyberspace, appears next week.

Social business: a change of paradigm for economic and development diplomacy?

The Iran nuke deal: secret negotiations in an era of transparencyLost for words: the value of investment in language training for diplomats
Scroll to top