You are here: Home1 / Beyond the hype of the race for 5G

Beyond the hype of the race for 5G

The 5th generation of cellular wireless technology (5G) is a big step forward for mobile broadband as it will significantly increase internet speeds, improve latency, and provide higher bandwidths. It is an enormous economic opportunity that will unlock the potential of the internet of things (IoT), connecting a barrage of smart devices to the internet.

Additionally, 5G will also be used to control water and electric supplies, integrating 5G with critical infrastructures of a country. Intelligence and military applications of 5G have received a lot of attention as well. Danielle Cave argues that 5G is a key strategic technology. 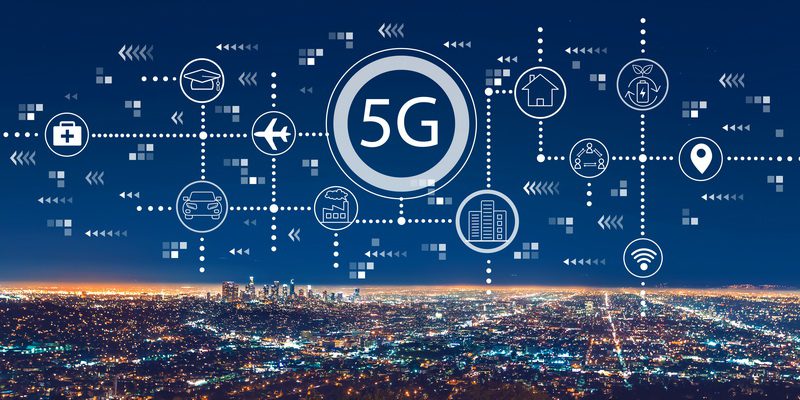 The digital geopolitics of 5G

Crucially, the development and deployment of 5G comes at a time when China is challenging the technological superiority of the United States. China also holds a tight grip over its companies, including major 5G infrastructure providers like Huawei, and it exports digital authoritarianism through its technology exports. 5G has been securitised in the West due to the strategic implications of the technology.

5G is no longer viewed as a purely technical matter. Instead, it has spilled into the world of geopolitics and great power competition, and is increasingly viewed from the lens of national security. The logic followed is that a technological lead in 5G will give the first-mover advantage and allow them to dominate specific sectors in the foreseeable future. However, research shows that any advantage that China gains would be short-lived due to the difference in the way the market functions in the two countries, and late adopters of the technology may achieve a greater growth rate than early adopters because they can take advantage of matured technological solutions, cheaper deployment costs, and more specific business cases. Notwithstanding, 5G is seen as a ‘national security imperative’ by Major General Bob Dees, while Allison and Schmidt suggest that if the United States is to turn the tide in this ‘race’ against China, it must make 5G a ‘national priority’. Challenges to 5G in the Global South

The promise of 5G, or its geopolitical implications, captures most of our attention. The obsession with 5G obscures the ground reality in the Global South where a large chunk of the population will not have access to 5G and its benefits for years to come. If there is an actual race for 5G beyond the hype, well over half the world’s population is not in it.

The UN Secretary-General’s report on the Roadmap for Digital Cooperation highlights the potential of digital technologies to exacerbate the existing inequalities in society. The report mentions that in 2019, the percentage of individuals using the internet in developed countries was over four times higher than in least developed countries (LDCs). It draws attention to the usage gap of mobile broadband and various barriers responsible for this digital divide, such as costs, limited fibre-optic networks, lower purchasing power, and a lack of digital skills.

While internet uptake has increased during COVID-19, roughly 2.9 billion people do not use the internet, 96% of whom live in developing countries. In developed countries, 90% of people use the internet. This number drops to only 57% in the developing world. The urban–rural gap and gender parity index also leaves much to be desired.

The type of broadband used also varies, with much of the developing world relying on mobile broadband as it is the cheaper and often the only option. This is proving to be a challenge due to the affordability crisis of mobile handsets triggered by pandemic-related disruptions. 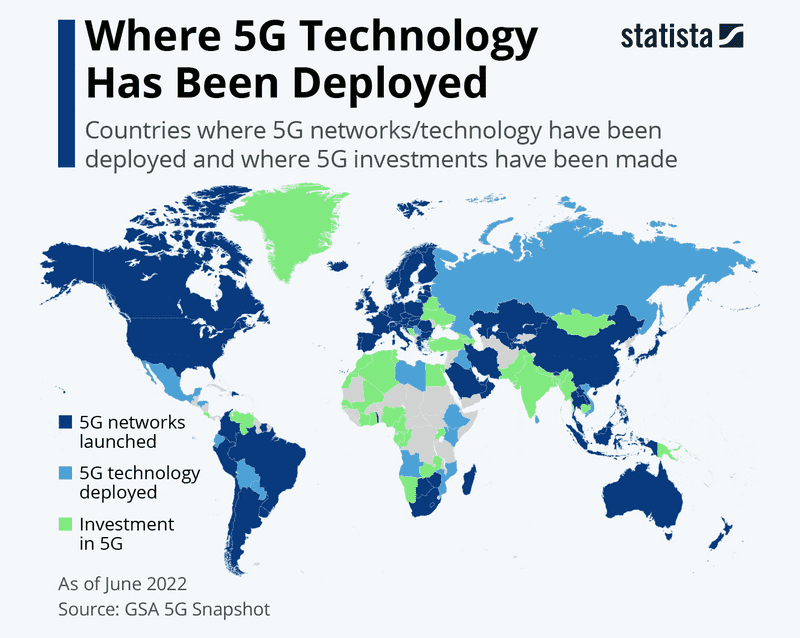 Countries where 5G networks were launched, where 5G technology has been deployed in mobile networks, and where investments in 5G technology have been made (as of June 2022). Source: Statista.

In this context, a large-scale deployment of 5G remains a pipe dream in the developing world. The USA–China tussle only makes things worse by disrupting global supply chains and coercing countries to avoid cheaper Chinese products. The resulting excess costs could be put to much better use in product development and tackling the digital divide. An even more considerable risk for the long-term future of the internet is a fragmentation of the internet due to parallel 5G ecosystems due to limited interoperability between supporters of either camp.

Take the case of South Asia, for instance. South Asia has the largest usage gap in the world at 61%, despite only a 5% coverage gap. The digital divide persists, especially in rural areas, because of low literacy and poor digital skills, and in a place as diverse as this, language is also a barrier. This is despite the excellent affordability of mobile internet in the region. While countries in the region have 5G aspirations, the process is delayed endlessly by spectrum auctions and trials. The few that have deployed 5G have done so in very few locations, as the fibre backhaul needed to support the higher bandwidths of 5G is not in place. Countries are opting to use less-than-ideal non-standalone technology to save costs. In the Maldives, there are no 5G phones to use the 5G network deployed, and the costs are too high in countries where they are available.

There is no denying that 5G is the future of mobile broadband. However, beyond the high-income countries that can deploy a 5G network at a fast enough pace with decent coverage, expectations for 5G must be tempered. Innovation in 5G should be encouraged, but countries in the developing world are better off focusing on digital inclusion through digital skills training, affordability, accessibility of essential equipment such as smartphones, and increasing the reach of their networks to rural and remote areas.

Yug Desai is a doctoral researcher at the South Asian University in New Delhi. He holds an MA in International Relations from the South Asian University, New Delhi, and a BTech in Computer Engineering from the Narsee Monjee Institute of Management Studies (NMIMS), Mumbai. He is currently enrolled in Diplo’s online course Internet Technology and Policy: Challenges and Solutions.

Intercultural communication and logical fallaciesIt was 20 years ago today: Two decades of the increased research, education,...
Scroll to top