You are here: Home1 / Back to cable geo-politics? (first part)

Back to cable geo-politics? (first part)

News of the laying of a BRICS-cable triggered public attention as news of laying telegraph cables did a century ago. The ‘cable rush’ by Britain, Germany and France – then major industrial and colonial powers – heralded the start of cable geo-politics which still exist today.  Despite all the promises of the end of geography and Internet ‘virtuality’, geography remains as important as ever. Are we facing a renewed interest in cable geo-strategy?

News of the laying of a BRICS-cable triggered public attention as news of laying telegraph cables did a century ago. The ‘cable rush’ by Britain, Germany and France – then major industrial and colonial powers – heralded the start of cable geo-politics which still exist today.  Despite all the promises of the end of geography and Internet ‘virtuality’, geography remains as important as ever. Are we facing a renewed interest in cable geo-strategy?

In Part 1 of this two-part blog, we will look at the emergence of cable geo-strategy. Later on this week in the second blog we will discuss parallels between telegraph and Internet cable geo-politics, including the potential impact of a BRICS cable. With all its limitations as a teacher, history can provide some useful insights, at least, when it comes to what should be avoided.

Invention of the telegraph and cable geo-politics

Like the Internet today, the telegraph developed very quickly, in the matter of a few decades. ITU statistics show that in 1868, 29 million messages were sent; this increased to 121 million in 1880 and to 329 million at the end of century.

The first challenge to the development of the international telegraph network was the laying of the trans-Atlantic cable. Although Queen Victoria and US President Buchanan managed to exchange messages in 1859, the cable stopped functioning a few months later, after only 732 messages had been sent. It required another two attempts for the cable system to become fully functional in 1866. One of the reasons for this delay was the American Civil War (1861-1865).

Unsuccessful attempts to establish a trans-Atlantic link are often cited as one of the reasons for the US decision to purchase Alaska from Russia. Western Union president Hiram Sibley urged the purchase of Alaska in order to establish a 16,000 mile land-based wire between the USA and Europe through western Canada, Russian Alaska across the Bering Strait and through Siberia. This terrestrial telegraph scheme was abandoned in 1868 when the trans-Atlantic cable proved to be a success.

Telegraph cables became a main new investment area. Private investment in the development of the telegraph, mainly the transatlantic cable amounted to almost $12 million. The scale of this investment can best be illustrated by the fact that the total US military budget in 1860 was $15 million and that Alaska was purchased from Russia in 1867 for $7.2 million. 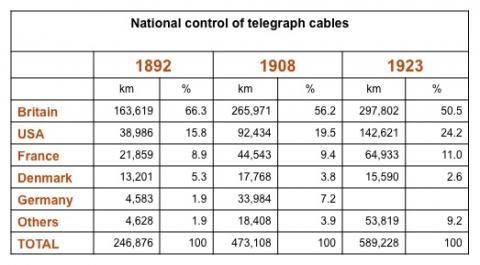 Great Britain was the first country to discover the economic potential of the telegraph and moved very early and quickly into wiring the world with telegraph cables. Towards the end of the century, Great Britain controlled most of the global telegraph network.

With its dominant telegraph network, Great Britain was well set for the forthcoming international crises, which started on the cusp of two centuries. The level of British dominance can be illustrated by the fact that other countries had to use British networks for their official and diplomatic communications.

Other countries realised relatively late, both the importance of having a telegraph network, and the extent of the British dominance. Although France pioneered the development of the telegraph (‘mechanical telegraph’), it was a late-comer in the development of a global telegraph cable network. It was only after a series of crises (Tonkin, Siam, and Fashoda) that the French parliament started to take the problem of the lack of its own telegraph network, and British dominance in this field, seriously.

Germany also entered the race for the development of cable networks late. There were many reasons for this, including its late start in developing a colonial empire, long after the main colonies were established by other powers. The maintenance of links with its colonies, as an important motivating force for the development of a telegraph network, did not exist. Yet Germany was very rapidly gaining strategic power. With formidable scientific and technological developments, Germany achieved the critical mass needed to become a global player. In order to play the global game, however, Germany needed a global communication system. 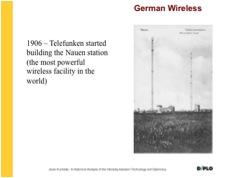 Germany, like France, faced British dominance in this field. After many failed attempts, Germany managed to create its own transatlantic telegraphic link via the Azores. This cable, like other German-owned telegraph cables, was cut at the beginning of the First World War. The strategic importance of telegraph cables became more vivid. One disadvantage turned into an advantage for Germany: Faced with British ‘cable monopoly’ Germany started developing its own wireless communication.

The emergence of the United States as a global political and economic power can be traced via the extent of its share in the global cable network. This was particularly noticeable after the First World War. When the British tried to extend their cable monopoly to the Americas, the USA reacted by developing its own network in the Americas, some sort of ‘cable Monroe Doctrine’.

The telegraph and geo-politics 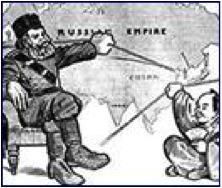 The history of telegraph cable geo-strategy reflected, to a large extent, the complex geo-strategy of the European balance of power system. For example, the British cable system followed the Rimland line of Machan/MacKinder (Gibraltar-Malta-Suez-Aden-India). Other players, mainly Russia and Germany, tried to strenghten the Heartland (Euro-asian continental mass). Russia was extending its cable network towards Asia. New telephone cables were supposed to support the Berlin-Baghdad railway.

Britain’s primary goal of protecting the Rimland was also obvious in its blocking of German plans to establish a telegraph cable between Basra (the Persian Gulf) and Goa (India). Although the refusal for landing rights for the cable officially came from the Ottoman Empire (Basra) and Portugal (Goa), the main opponent of such plans was actually Britain, which had a strong influence on both the Ottoman Empire and Portugal. Ultimately, in 1913, Germany approached the real decision-maker, British Foreign Secretary Sir Edward Grey, who refused the request for support of the Indian cable: ‘Germany has no great commercial need for such a cable… and he is accordingly led to the conclusion that the object of their request is political.’

A similar situation existed in the colonial fight for supremacy, where the laying of cables followed colonial divisions and zones of influence. This was particularly noticeable in the relations between the British and the French colonial empires.

The telegraph and diplomacy 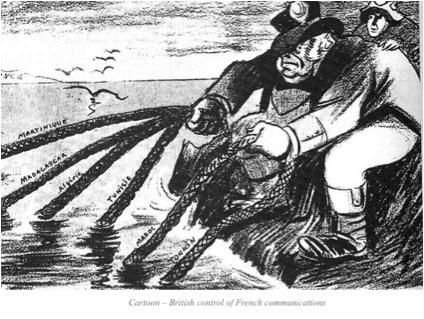 Telegraphic dominance provided the British Foreign and Commonwealth Offices with an enormous advantage in forging international policy. Most global business and government communication had to pass through British-controlled cables. There are numerous historical examples when this advantage proved decisive.

One historical example of the impact of the control of communication on the outcome of a military conflict is the Fashoda crisis, involving French and British colonial ambitions in Africa. The French plan to control Africa from the west (Dakar) to the east (Djibouti), clashed in Fashoda with the British ambitions to establish north-south control over the continent, from Cairo to Cape Town. The British victory in this crisis was determined to a large extent because the British commander (unlike his French counterpart) had a means of communicating, via the telegraph, with his headquarters.

This resulted in two main developments. First, while London was fully informed, Paris did not have a clue about what was going on in Fashoda. Second, exploiting his communication monopoly, British Commander Kitchener conveyed false information about the difficult position of the French troops in Fashoda. Paradoxically, in spite of France’s strong position on the ground in Fashoda, the outcome of the crisis was not favourable to French interests. The technological advantage was so strong that the French officials were forced to ask their British counterparts to send a message to Paris via the British telegraph.

It is reported that the British used their communication advantage for commercial purposes as well. For example, the USA was concerned that information sent to the USA Board of Trade via the telegraph was also made known to British firms.

The use of the telegraph gradually became part of international life and part of diplomatic tactics. Some authors, such as Stephen Kern, argue that ‘telegraph confusion’ contributed to the July Crisis and outbreak of the War in 1914. He said: ‘This telegraphic exchange at the highest level dramatised the spectacular failure of diplomacy, to which telegraphy contributed with crossed messages, delays, sudden surprises, and unpredictable timing.’

The second blog will focus on the parallels between telegraph and the Internet cable geo-politics.

This text is an extract from the broader study on historical interplay between technology and diplomacy. You can also visit series of webinars on this topic or contact me at jovank@diplomacy.edu

[1] There were a few primitive communication options which did not depend directly on means of transport, including smoke signals, fire beacons, and signalling using mirrors. Carrier pigeons were also a means of communication not directly linked to transportation.

WILF – new words for old phenomena Jet lag and the IGF 2013 in Bali: Whom will it hit hardest? Are we prepared...
Scroll to top