You are here: Home1 / 10 points for the EU’s future digital policy

‘It is about digital, stupid’ is the main message from Jean-Claude Junker, the new president of the European Commission. In the Policy Guidelines for the EC delivered at the European Parliament (15 July 2014), Junker outlined the EU’s digital policy focusing mainly on digital data, the oil of the modern economy. The first test of the EC’s approach will come soon in 2015, when key decisions on Internet governance will have to be made (the data protection regime, the future of ICANN, the WSIS process). 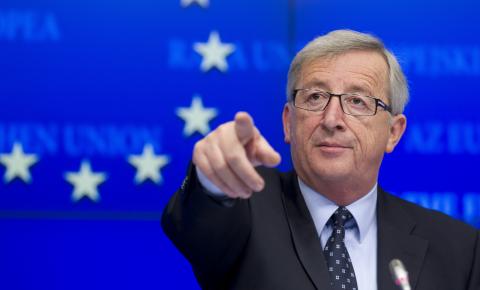 Digital policy will feature prominently in the EU’s priorities for the next five years, as presented on 15 July 2014 at the European Parliament by Jean-Claude Junker, president-elect of the European Commission.

Junker’s speech focused on the EU post-crisis.  Europe is on the edge of becoming the third world of the digital era.  There is not a single European company among the top Internet companies. Close to 80% of European Internet searches are done by Google. Some traditional areas of the European economy, such as the wine industry, were challenged by the recent controversy over the supervision of the new Internet domain ‘.wine’. Mass surveillance poses threats to the core democracy and human rights pillars of the European Union.

The EU’s ‘hard’ digital power is based on the attraction of a 500-million-person market with a high Internet penetration (65%). As the concentration of the Internet industry lobby in Brussels shows, this type of hard power matters. By negotiating with the EU on anti-monopoly and data-protection, Google and Facebook, among others, negotiate with the rest of the world (the EU’s arrangements with the Internet industry often inspire other countries and regions to take similar action).

The more Europe depends on the Internet, the more strategic Europe’s digital policy issues become. It is not surprising that Junker put the digital agenda second among the ten policy priorities for the EU in the next five years.  ‘Digital’ was one of the most frequently mentioned policy issues (10 times) in his speech. A linguistic analysis of the section on ‘A Connected Digital Single Market’ shows a high level of optimism and active language.[1] 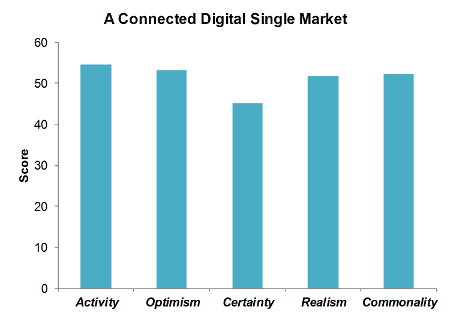 Excerpt from the semantical analysis of the Junker’s speech.

Here are the 10 main ‘digital’ points in Junker’s Policy Guidelines:

1. The digital sphere should be the engine of the EU’s economic and social growth, with an estimate that it will generate ‘up to €250 billion of additional growth in Europe in the course of the mandate of the next Commission’. According to the OECD’s estimate, 20% of economic growth in OECD countries is linked to the Internet.

2. The digital economy should generate new employment. However, there are some cautious voices. For example, a recent study by Bruegel, a Brussels-based think-tank, argues that 54% of jobs in the EU are at risk due to computerisation (e.g. robotisation, artificial intelligence). Will the EU manage to replace old jobs with new, mainly, digital jobs?

3. The digital sphere is also linked to the priority of the promotion of small and medium sized enterprises (SMEs). Digital SMEs will have to find their own space in a global digital market dominated by the major Internet companies. Here, the EU will have some leverage in ensuring a digital level playing field through, for example, anti-monopoly rules and net neutrality regulation, among other measures.

4. Junker recognises data as a key resource of the modern economy. Data protection was mentioned 10 times in his speech. The first step in the EU’s data protection strategy will be ‘swiftly concluding negotiations on common European data protection rules’.  With a more consolidated internal data protection regime, the EU will be better positioned ‘to uphold this right in our external relations’. Data protection becomes a foreign policy issue, mainly in relation to the USA, where most of the data belonging to EU citizens are stored.

Here, Junker opted for a ‘carrot and stick’ approach. On a conciliatory note, he is ready to give another chance to a ‘safe harbour’ arrangement between the EU and the USA, which involves the light regulation often favoured by the US business community. But, at the same time, he makes a strong and clear request to the USA that European data must be protected in accordance with European law. In addition, Europeans should have their rights protected in front of US courts. It is a demanding requirement.

5. Smart regulation and solid institutions are essential for digital growth. While Europe is strong in invention, it is weak in commercialisation. Europe does not lack good universities and investment in research. However, it lacks a ‘Silicon Valley’ approach, which can turn inventions into commercial successes.

There is a historical pattern with Europeans, mainly the French, inventing new communication technology, but failing to make it a commercial success. This happened with telegraph in the nineteenth century, when the French invented the mechanical telegraph, but lagged behind in the commercialisation of the electric telegraph. More recently, in the 1970s, the French Minitel system was an early form of Internet-style services (online purchases, exchange of messages), and French scientist Louis Pouzin laid the conceptual basis for the Internet (packet-switching networks). But the Internet, as a pervasive global network, was developed in the USA.

With reference to telecoms rules for the Internet, the main challenge will be the question of net neutrality. It is a messy issue which will be difficult to resolve. The European telecom industry, organised in ETNO, would like to see less net neutrality and more diverse traffic that should enable new services and sources of income for telecom operators.  While less net neutrality may serve the EU’s telecom operators, it might prevent the future growth of the European Internet industry, which may not be able to challenge the position of the main Internet players.

Junker proposes ‘modernising copyright rules in the light of the digital revolution’ without any other details on what that will entail.

On consumer protection, the EU could become the guardian of ‘Internet users’ in the EU, and globally. Without the need to protect the interests of the Internet industry, the EU has more freedom to promote and protect interests of Internet users.

Cybercrime was mentioned, while other aspects of cybersecurity were missing. This approach reflects the EU’s cautious approach when it comes to security issues that are the prerogative of member states. However, given the interplay between cybercrime and cybersecurity, it will be difficult to keep this separation in practice.

7. The digital sphere ‘should become a horizontal policy, covering all sectors of the economy and of the public sector’. Here, the EU – like the rest of the world – faces a challenge how to develop a holistic approach to digital politics. Typically, digital policy issues are addressed in policy silos. For example, data protection is discussed in the UN as a human rights issue, in the WTO as a commercial issue, and increasingly, in various bodies, as a security issue.  Junker will also have to deal with ‘vertical’ policy coherence with increasingly active member states in digital policy issues.

8. Standards are at the heart of the digital economy. Standards and software code can ultimately become de facto law by shaping how human rights are used and protected (e.g. freedom of information, privacy, and intellectual property). In the part of his speech dealing with the Free Trade Agreement (FTA) with the USA, Junker mentions ‘product standards’ (not only digital ones) as the field where both the USA and the EU should recognise each other’s standards, and work towards transatlantic ones. The EU has already highlighted the relevance of standards in the EC Communication on Internet Policy and Governance.   The question of standards has been introduced into the global Internet governance debate as well.

9. On the question of jurisdiction, Junker reassured his audience that the jurisdiction of EU courts won’t be limited by special regimes for investor disputes, as was announced in the first discussions on the EU-USA FTA.  He concludes that ‘the rule of law and the principle of equality before the law must also apply in this context.’

10. Junker’s request for  ‘enhanced transparency when it comes to contact with stakeholders and lobbyists’ may affect Internet governance by introducing more robust procedures in multistakeholder processes in order to ensure  transparency in the activities of different stakeholders.

ICANN-related issues are missing. In the broader diplomatic context they are not as important as they look from the perspective of the Internet governance community. Governance of data, the oil of the modern economy, is likely to dominate global digital politics in the forthcoming period.

It remains to be seen how the EU’s ambitious digital agenda will be implemented. Junker’s Cabinet will have the first tests very soon in 2015 when a series of important decisions on digital politics will have to be made (e.g. global data protection regime, US relations with ICANN, WSIS+10 summit).

[1]  For more details please consult the study: ‘Word Frequencies and Sentiment/Rhetorical Tone Analysis of the Speech by Jean-Claude Junker, President of the European Commission delivered at the European Parliament on 15 July 2014’ by Geneva Internet Platform and Diplo’s Language Lab.

The Future of the Internet