You are here: Home1 / Applying the pedagogy of positiveness to diplomatic communication

As one of the key-concepts in human linguistic life, “communication” has prompted several definitions for linguists, for example, that term can broadly refer to every kind of mutual transmission of information using signs or symbols between living beings (humans, animals), as well as between people and data-processing machines (Bussman, Hadumod, Routledge Dictionary of Language and Linguistics. London and New York: Routledge, 1996, p. 83).

In its narrowest sense, however, “communication” can be taken as meaning “the transmission and reception of information between a signaler and a receiver” (Crystal, David, The Penguin Dictionary of Language, 2nd ed. London: Penguin Books, 1999, p. 62).

If we leave the language and communication sciences and turn to international relations, what interpretations of “communication” can we find? That it is a process of negotiation “between states seeking to arrive at a mutually acceptable outcome on some issue or issues of shared concern” (Cohen, Raymond, Negotiating Across Cultures: International Communication in an Interdependent World, 2nd ed. Washington, DC: United States Institute of Peace Press, 1997, p. 9).

How about communication in diplomacy, or rather, among diplomats? Here is a definition taken from a dictionary for diplomats: “Communication among diplomats is a two-way street: one cannot expect to obtain much information unless one is able and willing to convey information” (Karl Gruber, 1983, quoted in Chas Freeman, Jr., The Diplomat´s Dictionary, revised ed. Washington, DC: United States Institute of Peace Press, 1997, p. 49).

What is shared in such definitions/characterisations? The shared nature of the process: communication is first and foremost an act of sharing.

HOW DO WE COMMUNICATE ORALLY?

By sharing the language used in a particular context at a specific time, by interacting, by co-constructing a dialogue or a multilogue, by expressing our attitudes, emotions, feelings in a friendly or in an unfriendly manner, by relying on many nonverbal signals (body language, facial expressions), by sometimes emphasising what is said – content – and sometimes emphasising how it is said – form, or we can communicate, more typically by integrating forms and meanings in contexts of use which can create different effects on our interlocutors. We can communicate by being explicit or by preferring implicit speech. We can communicate by hedging, by avoiding coming straight to the point, through purposely vague language. We can communicate by using not only words but terms (typical of different professional fields), as for instance in International Relations, lexical items used for talking about anti-globalisation: inhuman labour conditions, risky technology, abject poverty (cf. Varyrynen, Raimo, “Anti-Globalization Movements at the Crossroads,” in Policy Brief No.4. University of Notre Dame: Joan B. Kroc Institute, November 2000, p. 3).

As humans, we can communicate by expressing both positive and negative (or “questionable”) perceptions, by delivering both good and bad news, or by leaving out the positive side. We can communicate in socially responsible or irresponsible ways; in other ways, to bring out communicative harmony or disharmony. These reflections would lead us to questions such as: how are diplomats perceived? Why does there seem to be a practice of presenting diplomacy/diplomats negatively in books of quotations, for example? What would be the ratio of positive and negative perceptions of diplomats in such books, if a world bibliographic survey were conducted? How about diplomatic communication? How has it been described and why? What misperceptions are there concerning such process? What positive features and questionable features are being associated to the way diplomats communicate in speaking (face-to-face or on the telephone, etc.) and in writing?

In a recent conference held in Maryland, US, in July last year, US negotiators were described as tending “to be explicit, legalistic, blunt, and optimistic” (Peace Watch Vol. VI, No. 6. United States Institute of Peace Press, October 2000, p.1). Note that one of the adjectives conveys a potential negative or questionable meaning: “blunt” (discourteous, abrupt, curt). What is it that sometimes leads negotiators to communicate in such questionable ways? What would seem to be missing in the linguistic/communicative preparation of diplomats?

When I was asked to share a little of the philosophy underlying my Pedagogy of Positiveness, it occurred to me that to make it transparent, I should state some of its principles. Here they are:

APPLYING THE PEDAGOGY OF POSITIVENESS TO DIPLOMATIC COMMUNICATION: A CHECKLIST

Considering the apparently widespread misperceptions of diplomats and diplomacy in the media and in reference works (see especially books of quotations), in the light of our Pedagogy of Positiveness, a plea is made for (present/emerging/future) diplomats to launch an international movement which would help build an accurate, fairer image of the work (being/to be) done by those who commit themselves to helping bring about a truly interdependent world, through the international discourse of diplomacy. Having come across small but convincing evidence that a positive, public perception of diplomats and their activity is urgently needed – a plea is similarly made for organisations engaged in the education of diplomats to join in such cooperative effort.

Also considering that one of the most salient positive senses of “diplomatic” – to the public at large – is that of “being tactful” or displaying a friendly attitude toward other human beings – a plea is similarly made for that “positively marked sense of the term” to be capitalised on, through more research on the spoken/written vocabulary used in diplomatic communication as well as on the teaching of a constructive-human-dignifying use – and monitoring – of such lexicon to emerging/future diplomats so that they can be deeply aware of language using as a great humanising force in human interaction, especially in situations involving peace negotiation, mediation, and other challenging processes experienced by diplomats as true world citizens. One of the strategies suggested for the semantic preparation of diplomats would be their sensitisation to the functions of “positivisers” in diplomatic discourse (verbs, adjectives, and nouns which reflect/enhance inherently constructive actions and attributes or qualities in human beings). Another strategy would be that of learning how to read diplomatic texts constructively, by identifying “positivisers” in such texts: frequency of occurrence, potential impact, ratio of “positivisers” and “negativisers”, confrontational types of sentence structures, types of hedging and vague uses of language, among other features.

Considering the pioneering nature of this conference and the growing interest of linguists and other language-related interdisciplinarians in Political Discourse in general and the emerging interest of language-centred researchers on Diplomatic Discourse, a recommendation is made that that conference be sustained and broadened – through workshops, intensive seminars, and other pre-conference events which can enable participants to benefit from the expertise of specialists in the several language-focused domains of theoretical and practical relevance to the challenges of today´s diplomacy.

Considering that diplomacy has its own distinctive repertoire of terms (cf. Chas. Freeman, Jr., The Diplomat´s Dictionary, 2nd ed. Washington, DC: United States Institute of Peace Press, 1997) and that a profession’s lexicon should realistically reflect collective decisions and choices – another plea is made for a project centered on a Dictionary of Diplomacy (as multilingual as possible) to be prioritised on the Agenda of Relevant Reference Works for the Preparation of Diplomats. What I have in mind is a collectively shared, international project which could very well be sponsored by this conference’s host institution: the Mediterranean Academy of Diplomatic Studies.

Last but not least, a final plea is made for the study of Human Linguistic Rights to become a required subject in the education of diplomats. As promoters of “communicative peace” among persons, groups, and nations, diplomats need to become knowledgeable in that new category of human rights. A visit to the site of the Universal Declaration of Linguistic Rights (www.linguistic-declaration.org) may give an idea of the breadth and depth of the insights which can inspire needed research on the communicative rights and responsibilities of diplomats. In short, it is my conviction that a Pedagogy of Positiveness can contribute to the education of diplomats, especially in close interaction with International Relations, Linguistics, Communication Science, Peace Psychology, Peace Linguistics, and Human Linguistic Rights, to name but a few of the contributory domains.

We have made some progress since the mid-seventies, when researchers’ attention was focused on DoubleSpeak (Cf. Daniel, Dieterich, ed., Teaching about DoubleSpeak. Urbana, Illinois: National Council of Teachers of English, 1976. See especially the chapter on Guidelines for the Analysis of Responsibility in Governmental Communication, by Dennis Gouran, pp.20-32) to the present-day investigation of DiploDiscourse (for an example, see Ray T. Donahue and Michael H. Prosser, Diplomatic Discourse: International Conflict at the United Nations: Addresses and Analysis. Greenwich, Connecticut and London: Ablex Publishing Corporation, 1997) but much more should be accomplished if we are to start transforming Diplomatic Communication into dignified and dignifying discourse, thus contributing to harmonising and humanising an important domain within Political Discourse. For a suggested strategy on how to read a political text positively, see my article “Harmonizing and Humanizing Political Discourse: The Contribution of Peace Linguistics” (Peace and Conflict: Journal of Peace Psychology Vol. 6, No. 4. 2000, pp. 339-344). In short, if I may adapt my characterisation of “communicating well” therein to the diplomatic context, I would say that “communicating well diplomatically means communicating for the well being of diplomatic interlocutors and, more broadly, for the well-being of humankind.”

To joke or not to joke: A diplomatic dilemma in the age of internet

Part of Language and Diplomacy (2001): The first paper, presented by Prof. Peter Serracino-Inglott as the keynote address at the 2001 conference, examines the serious issue of diplomatic communication in a playful manner, through one of the most paradigmatic and creative examples of language use: joking.

Part of Language and Diplomacy (2001): In the preface below, Jovan Kurbalija and Hannah Slavik introduce the chapters in the book, and extract the general themes covered by the various authors.

In this chapter, Walter Fust talks about the role of knowledge management, and knowledge for development, in diplomacy. He describes various methods to assess what knowledge should be stocked, and explains the need for managers who are assigned the task of deciding what should be stocked. These decisions need to be guided by principles, or guidelines - referred to as value management. 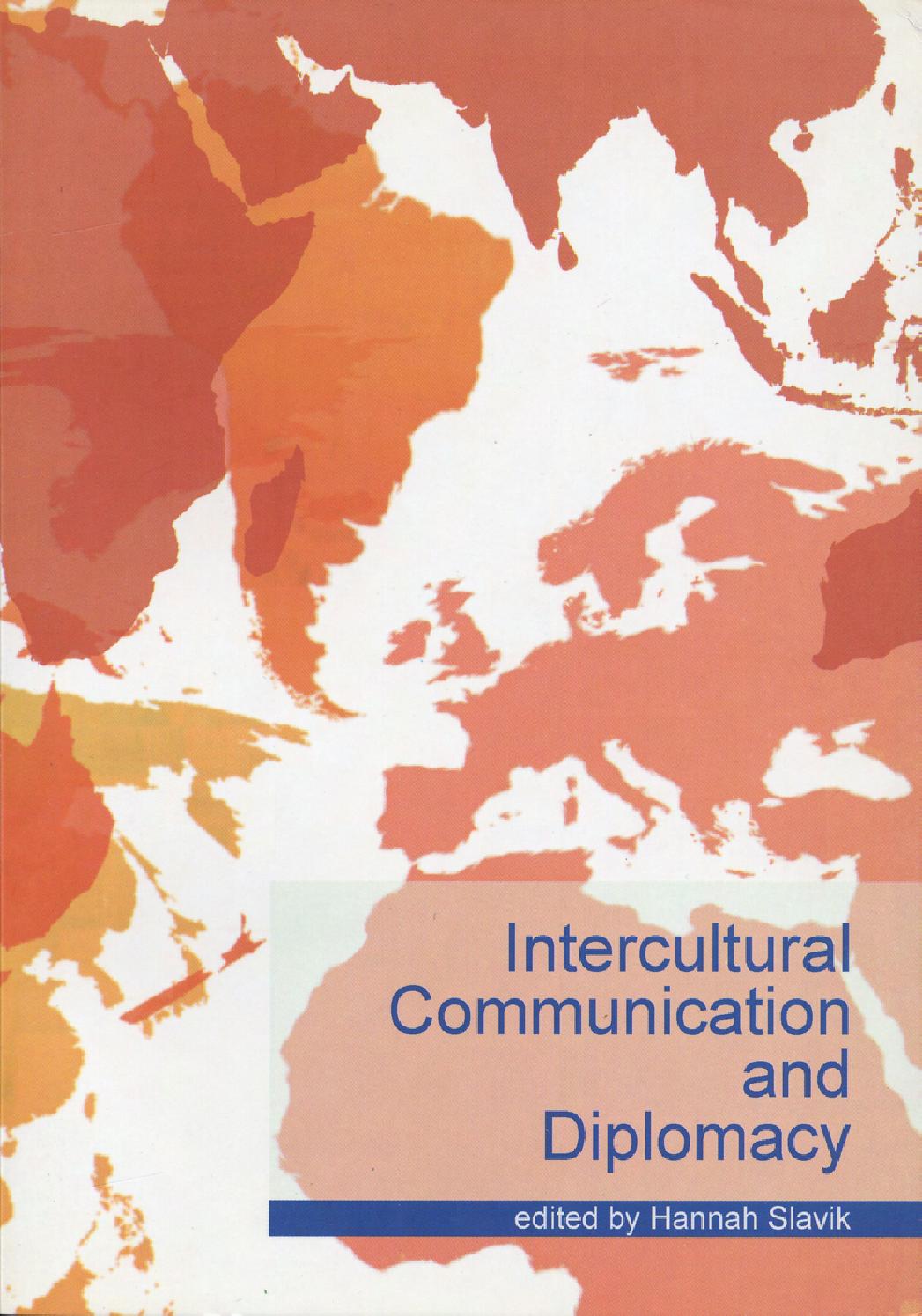 When two negotiating parties from different cultural backgrounds attempt to communicate, the potential for disagreement and misunderstanding is great. People from other cultural backgrounds, especially from the West, often find the behaviour of Chinese negotiators strange and unintelligible. This paper examines communication barriers between Chinese, Australian and American negotiators.

In one of his last essays before his premature death in 1972, Martin Wight described international conferences as ‘the set pieces punctuating the history of the European states-system, moments of maximum communication’.