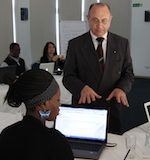 ‘It was an awesome, eye-opening, interesting, and very formative experience that helped to broaden my perspective on the complex scenario of economic diplomacy in our increasingly changing world. It gives you an accurate and updated view, as well as the tools you need to face the many challenges of economic diplomacy in the 21st century.’ Berenice Díaz Ceballos, Head of the Consulate of Mexico in Oxnard, California

Diplo invites you to apply for our upcoming autumn 2014 online courses:

In recent years, consular and diaspora diplomacy have both emerged as important areas in diplomatic studies; governments are becoming more citizen-centric. Consular diplomacy has gained prominence in many foreign ministries, a dramatic turnaround from its earlier status as a routine activity. This is directly connected with the enhanced role of publics in foreign affairs. Consular diplomacy deals with two sets of people. The first is one’s own citizens, who need travel documents to go overseas, and protection and help while they travel abroad: extradition, emergency assistance, and repatriation. The second group includes foreign citizens who need visas, illegal migrants, and overseas workers. Migration produces diasporas. Globally, some 215 million people are migrants (i.e. the first generation of those that have gone to foreign countries). Subsequent generations sometimes merge into the local population, but often retain their connections with the home states, over many generations. Today diasporas are active in international affairs. The interconnected areas of providing citizens with consular services, and working with the diaspora, are now priorities in international affairs.

Today’s headlines often feature the word ‘cyber’, reporting on threats related to the virtual world: online child abuse, stolen credit cards and virtual identities, malware and viruses, botnets and denial-of-service attacks on corporate or government servers, cyber-espionage, and cyber-attacks on critical infrastructure including nuclear facilities and power supply networks. What are the real cybersecurity challenges? What is the role of diplomacy, international legal instruments, and regional and national policies in addresses these threats, and how efficient are they? How does international cooperation in cybersecurity work, and what are the roles of the various stakeholders? The 10-week advanced thematic course in Cybersecurity covers policy challenges, actors, and initiatives related to cybersecurity, and specifically to cybercrime, security of the core infrastructure, cyberwarfare and cyberterrorism, and Internet safety.

Economic diplomacy deals with the nexus between power and wealth in international affairs. Economic diplomacy not only promotes the state’s prosperity but also, as occasion demands and opportunity permits, manipulates its foreign commercial and financial relations in support of its foreign policy – as in the case of sanctions against Iran. Accordingly, economic diplomacy is a major theme of the external relations of virtually all countries. At home, economic ministries, trade and investment promotion bodies, chambers of commerce, and of course foreign ministries, are all participants in economic work. Current trends include increasing collaboration between state and non-official agencies, and increased importance given to WTO issues, the negotiation of free trade and preferential trade agreements, and accords covering investments, double taxation avoidance, financial services and the like. Abroad, embassies, consulates, and trade offices handle economic diplomacy. The main focus is on promotion, to attract foreign business, investments, technology and tourists. Economic diplomacy connects closely with political, public and other segments of diplomatic work. This online course is practice-oriented, and aims at capacity development.

What makes one set of words more convincing than another, and how can language best be put to work in the service of diplomacy and international relations? This course promotes language awareness as a means of improving the skills of opinion shapers. Close attention is paid to case studies of treaties, presidential speeches, public announcements, government advertising and media materials in order to link theoretical discussion to practical examples. Since effective communication has much to do with reading intentions and contexts correctly, insights are provided into relevant cultural, social and psychological variables.

Click on the course titles above to read more and apply, or contact admissions@diplomacy.edu for further information.

Torino Symposium: The Evolution of the Internet Governance Ecosystem