In our June WebDebate, we explored the potential of artificial intelligence (AI) for peacemaking:  the opportunities AI tools offer for mediation, the feasibility of these tools, and how they fit into the role and work of the mediator. We were joined by Mr Enrico Formica (Senior Mediation Officer, Policy and Mediation Division, Department of Political and Peacebuilding Affairs, UN Office at Geneva), Dr Katharina Höne (Senior Researcher with a focus on digital technology and diplomacy, DiploFoundation), Mr Diego Osorio (Expert in mediation, negotiations, and peace processes) and Ambassador Miloš Strugar (Executive director of the Conflux Center, UN Senior Mediation Adviser, independent consultant, university lecturer, writer, and columnist).

How technology caused mediation to change

Höne started the debate by highlighting that mediation is usually considered a low-tech field. However, there is now a sense that technology can offer formidable opportunities for the practice of mediation, and many of these opportunities are discussed under the umbrella of #cybermediation. A number of activities in the area of #cybermediation were carried out in 2018: the #CyberMediation Initiative launched by the UN Department of Political and Peacebuilding Affairs, DiploFoundation, the Geneva Internet Platform (GIP), the Centre for Humanitarian Dialogue, swisspeace, and researchers from Harvard University; and, the launch of the ‘Toolkit on Digital Technologies and Mediation in Armed Conflict’ by the UN Department for Political and Peacebuilding Affairs and the Centre for Humanitarian Dialogue Capstone Project.

Strugar noted that the nature of conflict has changed to hybrid conflicts – a mix of classical armed operations, information operations, and technological operations. This necessitates a change in mediation – a mediator must be aware of what is happening in the field, but also be digitally literate and know what digital tools can be successfully applied to help the mediation efforts. Strugar also outlined that he, in his role as a mediator, uses social media (to get information, to target or reach the target audience or the general public, to mobilise support, and promote peaceful resolution and mediation efforts) and mapping and geographic information system (GIS) (for monitoring ceasefires or the disengagement of forces). He underlined that the main challenge in using digital tools in mediation is how to detect manipulation, disinformation, and misinformation. He argued that digital information technology is an ungoverned space. Digital tools are owned by private companies, which brings up the question of ownership of results and content. This raises further questions on what data is being used in big data analysis, who formulates the algorithms, and on what basis. Additionally, a new cold tech war between the US and China might result in multiple different Internet spaces.

A toolkit for mediators

Formica briefly introduced the toolkit ‘Digital Technologies and Mediation 1.0’, created at the request of the Secretary-General to explore the effect of digital techniques in the field of mediation. The toolkit is based on practical experience – it is the result of researchers’ observation, of a survey conducted with practitioners, and consultations with mediators and support personnel. Formica pointed out that the toolkit identifies some of the technologies that have already been used in mediation: social media, GIS, data analytics, etc. It has also been identified that mediators are interested in using machine learning, virtual reality, and blockchain. The toolkit analyses four crucial elements related to mediation: content analysis, engagement with the parties, inclusivity and strategic communication.

AI and the human cognitive framework

Osorio underlined that AI is going to help enhance the human-led, human-induced and human-managed processes of mediation. While AI will help multiply our capacities, mediation will still be linked to the cognitive framework of humans. Humans have limitations: cognitive, conceptual, cultural, socio-economic, etc. AI could be the set of tools and technologies that help us go beyond those restrictions, uncover new options, and help us frame the debate in a different way. In terms of data analysis, AI could look at the entire set of agreements and identify and compare patterns and solutions. The ability to capture and analyse text and deliver the best possible outcome based on the comparison is stage one of what AI is going to deliver. The ability to take that analysis beyond the human cognitive framework is stage two and we need to be prepared for it.

Höne explained that according to Diplo’s research, AI is particularly relevant for gathering and analysing data to inform mediation during the preparatory phase, the process itself, and follow-up and implementation. The research also shows that AI can make a contribution to key fundamentals of the mediation process, in preparedness and impartiality. AI has a lot of potential as a tool for mediation in terms of collecting and analysing information, but there are also very clear limitations – for example, AI cannot draft a peace agreement.

Strugar highlighted that there are emotional challenges mediators have to overcome in addition to keeping in mind the positions, needs, and interests of the parties. Mediators need to know their history, culture, sets of values, as well as their perceptions about themselves, the enemy, and the mediator. Mediators do not always have enough parameters to make an informed decision and instead act on instinct – human contact is key. Mediators avoid predicting the outcome of mediation as the current state of affairs changes very quicklyt and we need to wonder to what extent AI systems can be responsive to such changing circumstances. Strugar concluded that it is very difficult to see a machine replacing a human mediator at the moment, but that this might change in the future.

Formica opined that theoretically, AI could create more rational solutions to conflict situations, but war is the opposite of rationality. The irrational elements, as well as the emotions involved when going into conflict, are what make mediation a human-centred endeavour. AI can broaden the knowledge of the mediators; it can deliver smart options that mediators choose from and to which they apply their creativity, imagination and emotional intelligence in order to create a lasting solution. In summary, Formica argued that AI is very useful, but not in isolation.

Osorio noted that the main distinctions between humans and machines are the philosophical and ethical standards of humans. Humans are also capable of intuition, unlike machines. AI, digital technologies, and social media can be tools for inclusivity in a peace process. However, like the other speakers, Osorio concluded that humans should keep primacy in the mediation process. 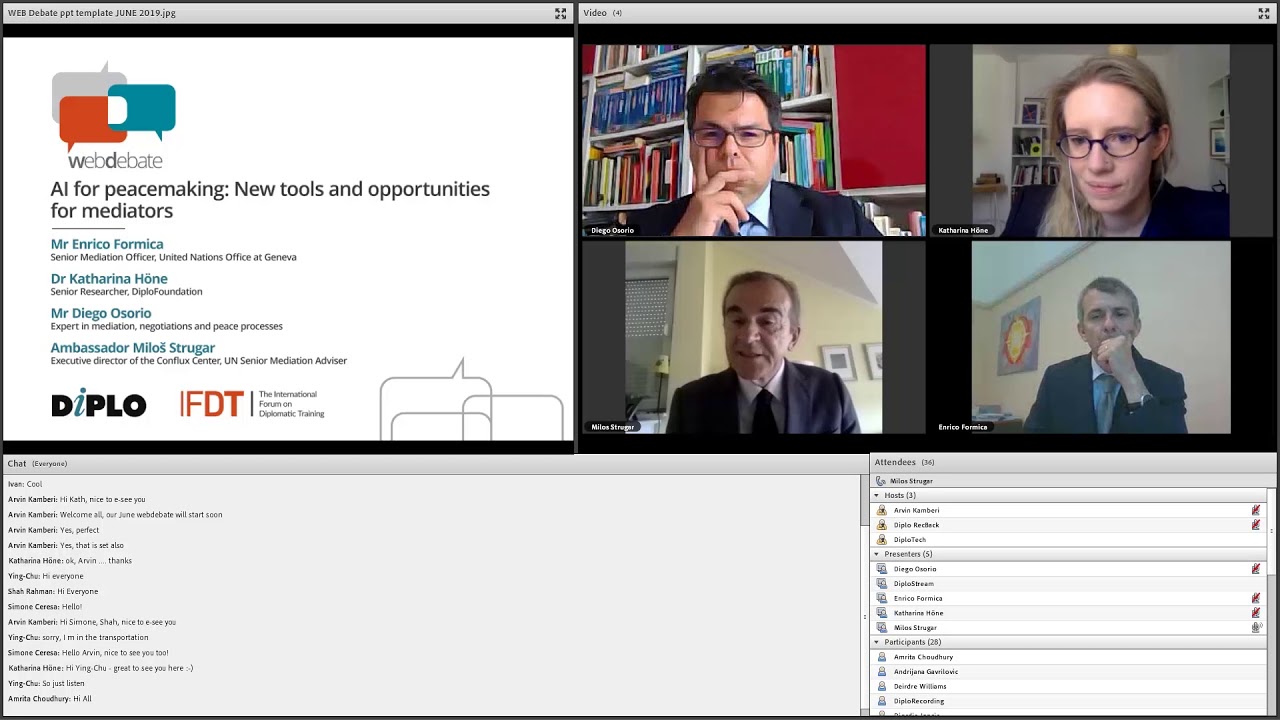