Twitter use in Turkey dropped when a ban on the platform was introduced. This simple fact was obscured by the excitement and celebration that in the days immediately after the ban Twitter traffic increased as people found ways around the block. But, as the figure illustrates, usage dropped after that first spike. Circumventing the ban required extra effort, and some technical knowledge, both significant barriers to a service part of whose USP is ease of use, and immediacy. And as users found a way through, using Google’s public DNS1, for example, Turkish ISPs moved to manage the traffic going through Google. 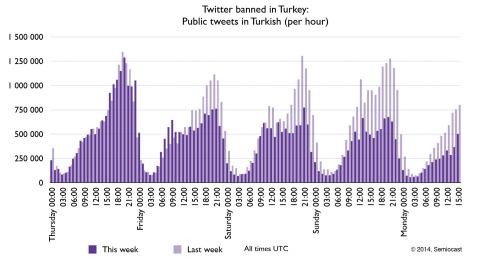 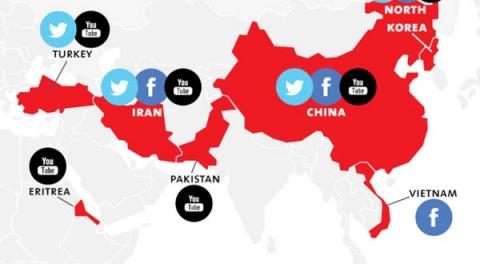 The impact on e-Diplomacy is, of course, potentially profound. There has been an active and growing Twiplomacy community in and on behalf of Turkey, both official and unofficial, for example. And blocking channels chokes both internal and external conversation, affecting especially those states that have enjoyed being able to use the channels to reach directly to people inside a country where official channels are constrained. So while it’s true that ‘using digital channels in diplomacy will become the norm’, as the Director of Israel’s Digital Diplomacy Unit recently put it, there is no likelihood that conventional channels are going to be eclipsed.

It’s interesting to speculate, then, on the impact of developments such as the proposed BRICs cable, or the Brazil-EU proposal. Would such a channel offer greater, independent access (at least from US controlled or owned infrastructure), or will they provide an even easier channel to control? And if so, what would be the decision-making process on such a new, collaborative venture? And how would we know what has been decided? Rarely has a transparent, global mechanism for Internet Governance been more important.

And then there will be the Facebook network to ponder. Facebook’s purchase of Oculus, a leader in Virtual Reality headsets, has garnered a lot attention but FB solar-powered drones circling independently above remote locations providing Internet access would be more likely to have wider global impact. It’s likely, probably, that access to the Internet in this setup would be through Facebook.com, and might even be limited to that site and it’s applications. But what price control in the context of FaceWeb – or GoogleWeb (the wonderfully named Google Loon project)? It seems that Facebook and Google, along with the other major US Internet corporations have been exposed as collaborators with the US security establishment in the surveillance revealed by Edward Snowden. It’s hard to imagine that either company would be unaffected by legal and other pressures from within the US in relation to a new Internet access channel.

Some – including me – find it a chilling prospect, that Facebook, Google and the Web might become even more confused in people’s minds. But it’s undoubtedly true that Facebook’s reach is spurring creativity and innovation. The dating site Tinder.com, for example, provides an instant matching service based simply on users’ Facebook profiles. Since regular users of social media sites tend to update and view them frequently, and the site uses existing friends networks as well as personal information, Tinder is able to offer a shortcut through what used to be a tedious and tricky process involving asking friends about often remote connections, and arranging for introductions. So if you can find love on a network, why worry about security or surveillance? Love is blind, they say, and some say that our love of digital technology is obscuring the need to be vigilant about how technological trends, to think through how wide-ranging and deep might be their impacts:

“This is the future we are sleepwalking into. Everything seems to work, and things might even be getting better—it’s just that we don’t know exactly why or how.”

1. “A DNS server tells your computer the address of a server it’s looking for, in the same way that you might look up a phone number in a phone book. Google operates DNS servers because we believe that you should be able to quickly and securely make your way to whatever host you’re looking for, be it YouTube, Twitter, or any other.

But imagine if someone had changed out your phone book with another one, which looks pretty much the same as before, except that the listings for a few people showed the wrong phone number. That’s essentially what’s happened: Turkish ISPs have set up servers that masquerade as Google’s DNS service.” (taken from Google Security updates)

Oops! What did I do wrong?Successful completion of IG programme for MENA region
Scroll to top