You are here: Home1 / Predicting NETmundial: What does data-mining the contributions tell us...

Predicting NETmundial: What does data-mining the contributions tell us?

Less than two months ahead of the world football championship in Brazil, another mundial (world event) will take place in São Paolo: NETmundial. This global event will gather over 800 representatives of numerous governments, the corporate sector, civil society, academic institutions, and the technical community, to discuss possible common Internet principles and the next steps in the global governance of the Internet.

Unlike in football, the ideal outcome of this diplomatic 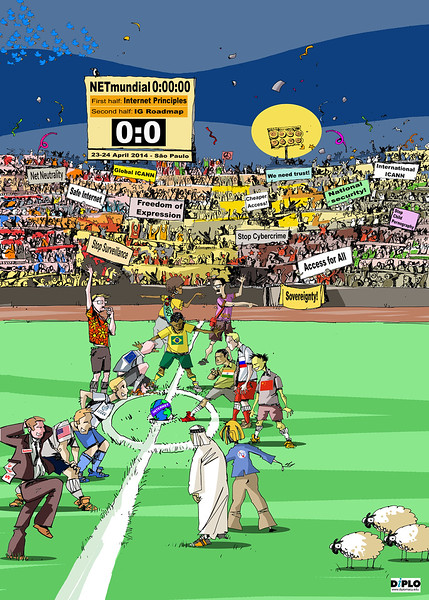 event should not be win-lose but rather (and hopefully) win-win. Nevertheless, the ‘sides’ have been taken since the World Summit on Information Society (WSIS) in 2003 and 2005, and especially since the polarised outcome of the 2012 World Conference on International Telecommunications (WCIT). The constructive diversity of stakeholder positions on myriad Internet governance issues (affordable access and cost, human rights, privacy, cybersecurity, critical Internet resources, jurisdiction, etc.) has become dominated by a polarised debate on the future governance model. Should it be continuation of the current multistakeholder model or shift towards an inter-governmental model with many variations in-between? We tried to depict this polarisation in the context of NETmundial with an illustration, while re-emphasising the hope for a win-win outcome.

In an open and inclusive manner, the organisers of NETmundial asked for contributions from all interested stakeholders with regard to the principles and a roadmap that should form the agenda of the meeting. A total of 188 contributions were received from all over the world, with over 20 government contributions (including Canada, China, the EU and several European countries, India, Iran, Mexico, Russia, Switzerland, the UK and the USA); unfortunately there was only one government contribution from the Arab states (Tunisia), one representing island states (Trinidad and Tobago), and none from sub-Saharan Africa. The technical community was somewhat weaker in its response; no contributions from tech communities in Europe, BRICS, or Arabic countries were submitted. The NETmundial team worked on summarising the contributions and drafting a possible outcome document.

To assist the process, Diplo and the recently launched Geneva Internet Platform conducted the analysis of the 188 contributions, based on the data-mining and discourse analysis techniques successfully implemented in the IGF Language project which involved the analysis of the transcripts from the Internet Governance Forums (IGFs). We observed the appearance of certain words, phrases, and combinations of words in certain contexts from both quantitative and qualitative aspects: the frequency of occurrence of these in the contributions of each stakeholder group from each region, as well as the emotions and values they added in combination with some value words used. The interpretation of results in the NETmundial context was then based on ‘human’ knowledge and skills rather than being left to algorithms.

The aim of the project is to assist the evidence-based process during NETmundial: by observing patterns and trends of positions (on topics and/or process aspects) of various stakeholders from various regions, and interpreting them in their specific context, we are able to ‘predict’ and suggest ‘zones of possible agreement’ as well as possibly confront areas which might need further dialogue. We hope the results of this research will be useful for the NETmundial deliberations; it might also possibly pave the way for similar research exercises in other areas of diplomacy.

We are currently preparing a full report. But in the meantime, here are some interesting findings that can be of help for guiding the NETmundial dialogue. Take note though: this blog is longer than usual; you might want to get a coffee before you start into it or bookmark it to read later.

Plenty of other interesting results have emerged from the research, but we will stop here for the moment, and get back with further details at a later stage.

We will be reporting daily from NETmundial, so be sure to stay tuned.

This text is part of just-in-time analysis of NETmundial language. It is conducted by multidisciplinary team of linguists, lawyers, journalist and ICT specialists among others. For comprehensive follow-up of NETmundial please visit  recently launched Geneva Internet Platform.

Watch out for the wording: a NETmundial vocabulary
Scroll to top