You are here: Home1 / Looking back to see ahead: Chinese philosophy and the Internet

Looking back to see ahead: Chinese philosophy and the Internet

This detour from Internet governance to the history of philosophy was inspired by the setting of the World Internet Conference which I attended last week. Next to the high-tech conference centre is the ancient city of Wuzhen. This blend of new and old was an invitation to discuss the latest tech developments using ancient thinking, an invitation I couldn’t resist. In addition, 17 November was World Philosophy Day. It was most appropriate for me, I thought, to speak on philosophy and the Internet.

You may wonder what philosophy has to do with the Internet. Well, there are many reasons to think about the Internet philosophically. It is less and less a technical phenomenon and more and more a social one that profoundly shapes the human condition. Philosophy could help us to find answers or, at least, to pose the right questions on Internet and society.

In addition, by revisiting various philosophical traditions, we can find more common points in search for future solutions in Internet governance. Wasn’t it Churchill who said that the longer we can look back, the farther we can look forward? We can start this journey from various points in history and geography. We could go as far back as Ancient Hindu, the home of ‘0’ – the basis of our digital civilisation. Or perhaps to Ancient Greece, the birthplace of modern European civilisation and enlightenment – the basis of science and technology. Or we could start with Arab civilisation, and its great achievements in mathematics.

In reaching into Chinese philosophical heritage, it was a challenge to select a few examples for my presentation. I decided to focus on the Legalist school and the rule of law, Confucianism and meritocracy, and Daoism and ‘actionless action’.

For all three schools of thought, the common feature is that rulers get and lose their mandate to rule from ‘heaven’. ‘Heaven’ is a metaphysical concept linking Cosmos with Earth and the human role in the environment. In fact, one interpretation of the Chinese character for ruler or king – 王 (wáng) – is that the three horizontal strokes represent Heaven, Man, and Earth. The vertical stroke is the king, the one who connects them together.

In governance, the closest analogous concept to a mandate from heaven is a social contract. A need for a social contract for the Internet is frequently mentioned in current debates. If the ruler does not deliver on their mandate, the ‘contract’ can be cancelled. Famine, catastrophe, and social disorder are typical reasons for contract cancellation.  In the early twentieth century, the Qing Dynasty lost its mandate from heaven and, subsequently, forfeited its power to rule.

A prosperous society has been the best insurance for rulers that ‘heaven’ is happy with their performance. The mandate from heaven encompasses a few elements of the social contract as it is understood in political theory. The closest analogy would be Hobbs’s Leviathan. Leviathan via sovereign power should save every individual from anarchy in exchange for individuals accepting state authority. Hobbs’s Leviathan focuses on security. In addition to security, the mandate from heaven includes economy and social progress, as one can find in Rousseau’s and Lock’s social contract theories. 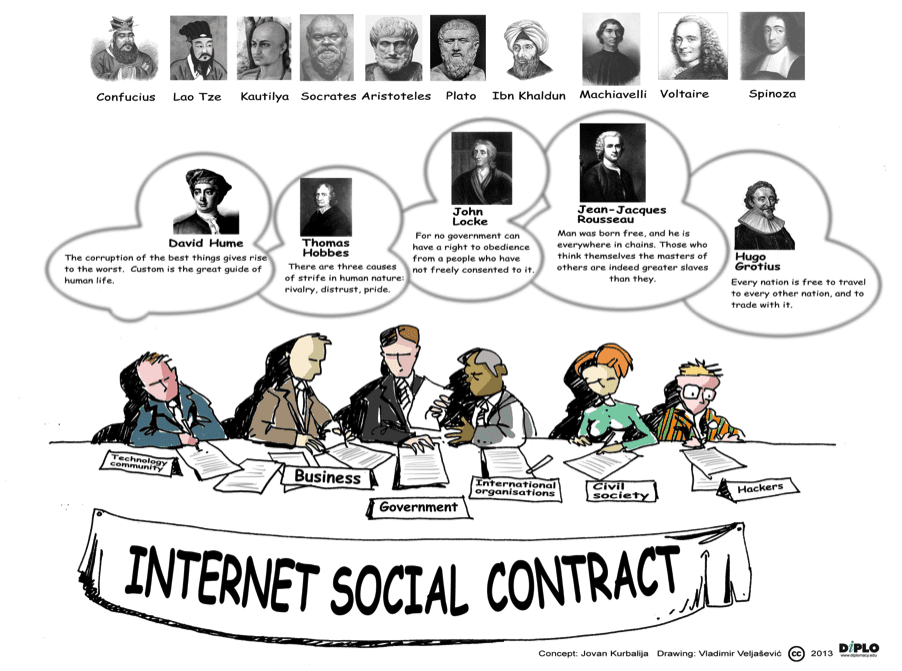 But let’s focus on the three schools of thought and their relevance for the digital era.

To run as big a society as China, law and predictability are needed. Force can be used to attain power, but law is needed for prosperity and stability. These insights inspired Shang Yang (商鞅) more than 2000 years ago to formulate Chinese legalism and introduce legal equality. He was killed in 338 BCE by aristocrats who thought that they were ‘more equal’ and that the law should not apply to them. His ideas survived his death and flourished. Legalism made his state, Qin, so powerful and prosperous that Qin’s ruler Qin Shi Huang united the country in 221 BC and became the first Emperor of China, more widely known today for his Terracotta Army. Since then, legality has become part of China’s collective unconsciousness and has been a reminder for all future rulers for centuries.

The closest parallel to Chinese legalism is the Realist School in modern political thinking. The practicality of running society has been the underpinning logic for rule of law in China. It is also practical for the Internet: if law is not observed, the platform can be abused and misused. Law must be used with necessary care in order not to suffocate the enabling and innovative potential of the Internet.

Good governance featured prominently in Confucianism as one of the key tools to improve human existence. A just and equitable society can be achieved through regulation. Here, Confucianism came close to the Legalist school. For Confucianism, taxation is essential for achieving an equitable society. This thinking could be of interest for current discussions on the fiscal aspects of the Internet.

According to Confucius, good governance can be achieved through meritocracy. State bureaucrats (mandarins) should be recruited based on their merits, mainly related to their mastery of the Four Books and Five Classics. An understanding of reality and facts mattered also in the mandarin system. In today’s Internet, we don’t have as many facts and evidence as might be expected from such an engineering system. Instead, we have informed guesses about the level of global Internet traffic. We have more sensationalist coverage of cybercrime than realistic facts about the magnitude of the problem and the level of risk involved. And evidence is not the strongest aspect of e-commerce, especially when it comes to fiscal issues. Confucianism provides a good historical lesson about importance of evidence-based policy making.

Daoists are sceptical about the possibility of achieving perfect order in human society. Instead, they argue that a ‘good enough’ order can be achieved through ‘The Way’ (Dao). The key to finding ‘The Way’ is actionless action or minimal governance and intervention. While Lao Tze’s teaching of actionless action sounds paradoxical at first glance, it can be seen in many Internet developments. A very limited intervention by the US government in running the Internet was key for Internet growth. More recently, spam was contained in a reasonable proportion through actionless action in the policy sphere. Instead of adopting a Spam Convention, as was proposed in 2005–2007, the solution was gradually developed through technology. Today, spam is no longer a main policy issue.

The complexity of Internet governance issues requires this cautious approach, so that our actions will not create unforeseen side-effects. Good could easily turn into bad. Thus, Dao advises that rulers should be cautious ‘like the fox crossing a frozen stream in winter’. The fox carefully tests the ice before taking each step.

These are a few parallels between Chinese philosophy and the Internet aimed at triggering a more comprehensive discussion. Many principles of running human society are the same or similar across space and time. Basic human motivations, fears, and hopes have not changed substantially across the centuries. By looking farther back we may realise that we have much more in common today than it seems sometimes during heated debates on Internet governance. Historical detours also help us to put our current problems into a broader historical perspective. A fresh look may lead towards new solutions.